The ‘New Black’ Mentality Is Causing More Harm Than Good, So Please Black Celebrities, Do Better 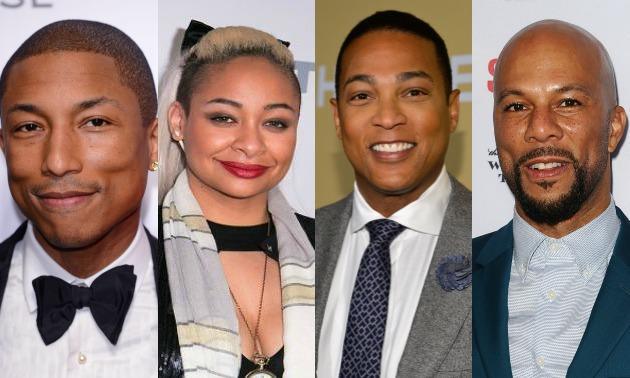 Last year Pharrell Williams, in an interview with Oprah, declared that he was a proud member of the “New Black.” In his contrived version of reality, “New Black” people do not blame “other people” for their problems. Instead, they assert themselves in society and probably chase that good ol’ American Dream.

Last year Raven-Symoné demanded that she not be seen as “African-American,” but rather just American. She also informed us all of her “interesting grade of hair,” as she aimed to negate her Blackness. This week she essentially defended a former Univision host who compared Michelle Obama to an ape. Hip-hop artist Common also informed us that Black people can end hundreds of years of racism and systematic oppression by extending a “hand of love,” to White people.

I would ask Kanye West to snatch all their mics, but to be honest, his recent declarations that “we” shouldn’t focus on racism, leads me to believe he is on this train of “New Blacks” as well. Destination: White acceptance.

Full disclosure: To many White people, from the distance, I am their Black friend dream-come-true. My middle-class, highly educated, slightly-English influenced way of speaking and all in the slim-privileged body of a polite Nigerian girl, probably meets the ideology of a respectable Black person. I am more Lupita Nyong’o than K. Michelle and they like that.

Of course when people read my work and listen to my cultural and sociopolitical analysis, they realize that I am not here for respectability or White acceptance. But rather to discuss racism and to advocate for those who are most targeted by its consequences. And when this happens, their Black friend dreams often go to die, hopefully buried next to a grave with any unchecked White privilege. As many White people as I may know and love, I am not here to make them feel comfortable at the expense of people of color, whose backs are already burdened with the weight of centuries of institutional oppression against them.

For many in the intersections of my identity, they choose to believe that their nationality or their class status or their education will protect them. I laugh. Perhaps certain intersections of my identity can shield me from certain stereotypes, but my Blackness isn’t going away anytime soon. Not that I want it to. I have no problem with my Blackness–I live in it and I enjoy living it. I do have a problem with the world having a problem with it. Considering there are those who are socially located in the same somewhat privileged identities as me, who think they are protected them from individual and institutional racism; it comes as no surprise to me that Black celebrities’ views and understanding of the nature of the Black experience in its entirety, often comment in a way that leaves much to be desired.

It wasn’t always like this. From Muhammad Ali to Sam Cooke and Ruby Dee and Maya Angelou, Black public figures who found themselves in the public eye used their celebrity status for activism. And yes one can argue that at the height of social change in the 60s and 70s, of course we had these public figures. But if you and I can barely go a day without hearing that some Black man or woman was killed or beaten in the streets, at a beach, in their neighborhood, in their home, in their sleep, etc., then it is quite apparent that activism from Black people and especially those who have voice and status, is necessary. The alternative is cowardice. The alternative is living on your knees, consumed by fear; afraid to continue the work of those whose blood, sweat and tears were shed so that future generations can endure.

It is true that many celebrities might not be able to articulate the cause, consequences and solutions for racism, but not having expert knowledge is not the same as either looking the other way in the face of injustice, or constructing mind-numbing, victim-blaming and false realities of what constitutes racism and how it affects disadvantaged bodies. Why are the Jesse Williams and J.Coles and Shonda Rhimes and yes, Azealia Banks of this country, so few and far between? In these examples, we have people who either because of their education or art, they at least have the courage to speak up to racial injustice. It may not be perfect but we do not need perfect–we need progress.

Anyone of any status who is involved in Black activism knows that they walk a fine line, especially when they are walking this line in White spaces. But it is still better to walk the line if at your journey’s end, there is the possibility for a fairer and more just society. So to all Black celebrities and to all Black people, and not just Black people, but everyone concerned with disadvantaged bodies, who buy into respectability politics and/or a cowardly silence: In the words of Audre Lorde, “Your silence will not protect you.”