The Loss Of African Traditional Religion In Contemporary Africa 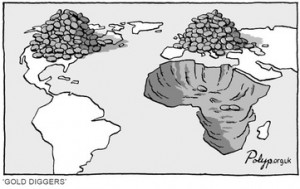 The desecration of Africa in the past by the Western European powers seriously and adversely affected the traditional cultures of the indigenous African people to the extent that many traditional beliefs, social values, customs, and rituals were either totally destroyed or ignored. In most cases they were considered to be nothing more than pagan values and superstitions that played no part in traditional African culture. Culture after all is the way of life developed by people as they cope with survival. True culture then must include the traditional beliefs and spiritualism. The introduction of European Christianity and values separated the indigenous Africans from their traditional ancient spiritual roots as well as their traditional identity as a spiritual people. This short paper is to introduce the reader to an introduction to Traditional African Religion

Traditional African religion is centered on the existence of one Supreme High God. However, the Europeans who spread Christianity in Africa never understood or properly appreciated the African’s own conception of the Great Creator. They saw no similarity between the God they preached and the African’s own belief in the One Supreme God and creator who was, king, Omnipotent, Omniscient, the Great Judge, Compassionate, Holy and Invisible, Immortal and Transcendent. The traditional African belief is that the Great One brought the divinities into being. He therefore is the maker and everything in heaven and on earth owes their origin to Him alone. He is the Great king above all Kings and can not be compared in majesty. He is above all majesties and divinities. He dwells everywhere. Thus He is omnipotent because He is able to do all things and nothing can be done nor created apart from Him. He is behind all achievements. He alone can speak and accomplish his words. Therefore there is no room for failure. He is Absolute, all wise Omniscient, all seeing, and all Knowing. He knows all things and so no secrets are hid from Him. If there is rain it is God who wills it and if the fish do not run it is by His will. This Great Creator is the final Judge of all things, but he is able to be compassionate and merciful. He can look kindly and most mercifully on the suffering of men and women and is able to smooth the rough roads through his divine priests and the spirits of the ancestors. The God of the African Traditional Religion is also a Holy God both ritually and ethically. He is complete and absolute since He is never involved in any wrong or immorality. Traditionally Africans believe that since God’s holiness blinds He therefore can not be approached by mere mortals. He is a spirit and thus must be approached by spirits invisible to mere humans.

How is this God to be approached then? He is to be approached directly and indirectly only through his chosen priests. Libations or prayers are the only supplications acceptable. And they are made by his chosen priests in traditional rituals and ceremonies at appropriate times and places. The priest becomes the keeper of the welfare of the people and subsequently is entrusted with the sacred rituals of worship. The African therefore does not need to prove the existence of God to anyone. God is self existing and needs no proof. His existence is self-evident and even children are taught from birth that the Great One exists. There is a Ga Language proverb that says, “No one points out the Great One to a child.” This God then is given regular and direct worship at regular intervals and the calendar is kept by dedicated priests. However, there is continuous indirect worship on a daily basis through the divinities and ancestors at all times during the day by each family and individual. The ritual altars in the African villages are the indigenous peoples’ way of reaching out and praising the Great Creator. To the Africans they are the boundary between heaven and earth, between life and death, between the ordinary and the world of the spirit. The constant pouring of drink, food and sacrificial animal blood makes them sacred and no one would dare abuse them. Some altars are simple; especially the ones in homes, but some communities and villages have communal altars for the entire village as vehicles for channeling the positive forces from the Great one and the ancestors to the whole community. Through oral traditions these cultural values are kept and transmitted from generation to generation. In summary:

The African traditional religious life has always considered all life to be the sphere of the Almighty, the powerful (the Otumfoo), the Omnipotent (Gye Nyame). He is wise, and all seeing and all knowing. He is the Great Spider (Ananse Kokroko), and the Ancient of Days (Odomankoma).

In the private and public life of the African religious rites, beliefs, and rituals are considered an integral part of life. Life then is never complete unless it is seen always in its entirety. Religious beliefs are found in everyday life and no distinction is made between the sacred and the secular. The sacred and the secular are merged in the total persona of the individual African. Life is not divided into compartments or divisions. Thus there are no special times for worship, for everyday and every hour is worship time. There are no creeds written down because through the traditions of the Elders all creeds and functions are carried in the individual’s heart. Each individual by his very nature and life style is a living creed from the time one rises until one retires at night. An understanding of the basic nature of the African religious tradition surely illuminates the meaning of spirituality in contemporary Africa.