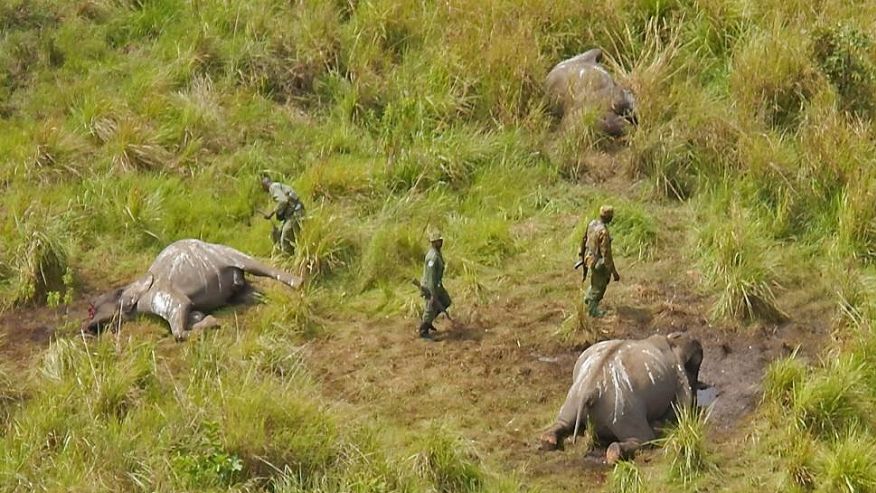 Elephant poaching is a on a dangerous and violent rise across central Africa, with some extremist groups even shooting the animals from helicopters and then using chainsaws to rip off their valuable tusks.

Reports suggest that at the Garamba National Park in the Democratic Republic of Congo alone, 131 elephants were slaughtered since last April.

Poachers in the past have normally relied on “low technology,” killing only one or two elephants at a time. But with heavily armed groups such as the Lord’s Resistance Army and Al Shabaab becoming increasingly involved, up to eight animals are being killed simultaneously.

Their tusks are then sold on the black market to be made into luxury goods in places like China.

The Lord’s Resistance Army–a vicious guerilla group led by the infamous Joseph Kony–appears to be the biggest offender and the poaching has helped to breathe new life into the militant group.

“Ivory has injected new blood into the LRA, which was nearly on its last legs in 2014,” Sasha Lezhnev, Associate Director of Policy at the Enough Project, which recently released a report regarding poaching, told FoxNews.com.“The LRA is one of the groups chiefly responsible for the poaching, along with Congolese army commanders and South Sudanese poachers.

The LRA was decimated in 2012-13 — the number of its fighters was one-tenth that from a decade before — so it needed a new lifeline.

“Ivory trafficked through Sudanese-held territory, as well as gold and diamonds, has provided that lifeline and is a chief source of financing for the LRA.”

It’s estimated that nearly 100 elephants are killed across Central Africa every day for their ivory tusks. In 2012 alone, 35,000 elephants were believed to have been killed by poachers. The increase in poaching has helped drastically lower the elephant population, with it declining more than 50 percent in the last 30 years.

Lezhnev says that the region needs more international support to monitor and root out poachers.

“Poaching is getting more high-tech, which puts the park rangers at a serious disadvantage,” he said. “However, this dangerous trend can be reversed with concrete policy steps. Howard Buffett’s foundation is now providing one helicopter to the rangers, staffed by African Parks, but the rangers need additional air support, and the UN needs to step up with much greater efforts to increase LRA defections.”

The price of ivory on the black market has reached a record high, due in part to unprecedented demand for the item in east and southeast Asia. The tusks are valued at up to $1,300 per pound and with the typical adult male elephant tusk weighing in at 135 pounds, the yield from one kill could mean hundreds of thousands of dollars in profit for poachers and smugglers.

The demand for ivory as a luxury item in China has been fueled in recent years by a growing base of middle class consumers. Since 2010, the price of elephant tusks on the black market has tripled and China even has legal intra-country trade sanctions for ivory, despite an international ban on legal trade.

“It’s almost impossible to determine illegally or legally traded ivory;” Peter Knights, CEO of WildAid, an illegal wildlife trade prevention group, told FoxNews.com, “Which makes it easier for many of these groups to launder their money through illegal trade.”

Knights said this demand that has harmed wildlife in Africa.

“The situation has gotten dire since 2008, when the demands in Asia and China rose,” he said. These methods have been used for a while but the players have changed.

“These groups like the LRA, Al Shabaab and even Boko Haram are getting involved with poaching but because they have soldiers at many of the ports, they control the smuggling operations as well and get a cut of the money.”