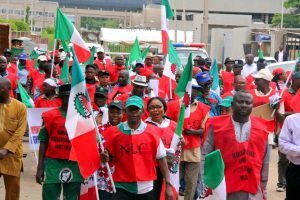 Youths from different African countries on Wednesday converged at the Economic Community of West African States (ECOWAS) secretariat in Abuja to demand action from African leaders on the issue of evasion and illicit financial flow from the continent.

The rally was part of a two day workshop organized by the NLC, ITUC-Africa and Public Service International (PSI) to sensitize youths from African countries on the effects of tax evasion on the continent.

Speaking during the rally at the ECOWAS, comrade Eustace James from the NLC said the youths were there to hand over letter of demand to the ECOWAS Commission for onward delivery to the various heads of government telling them that the youths are demanding tax justice.

The letter which was letter submitted to a representative of the ECOWAS commission president who was represented by Steven Narte was signed by General Secretary ITUC-Africa, Kwasi Adu-Amankwah and the PSI regional secretary for Africa and Arab countries, Sani Baba Mohammed.

While commending tax reforms efforts of countries within the continent and by the ECOWAS members states, the youths said they are convinced that addressing IFFs and curbing a race to the bottom (as a result of countries seeking national interest, on a short-term and short-sighted basis) regional and sub-regional approaches must be used to tackle IFF.

The youths therefore demanded that the ECOWAS commission work with the various heads of government, to among other things take urgent steps to implement the Mbeki Panel Report on Illicit Financial Flows from Africa.

Other demands as contained in their letter includes expand the tax base of African countries and ECOWAS member states, through progressive tax regimes, as well as rejecting multiple taxes and balancing of tax burdens on the backs of working people, poor households, women and youth as well as disabled persons.

Other demand include that “African leaders prevent the race to the bottom by halting excessive and avoidable tax concessions, incentives and other benefits to multinational companies and other big businesses.

“All companies doing business in Africa must pay their fair share of taxes on the economic activities that take place within that jurisdiction.”

In his response, the ECOWAS commission president representative lauded the youths for their initiatives. He said policy makers must take this into consideration and ensure that the future is bright for our youths

He promised to pass the letter to the various heads of government and ensure they act on it.