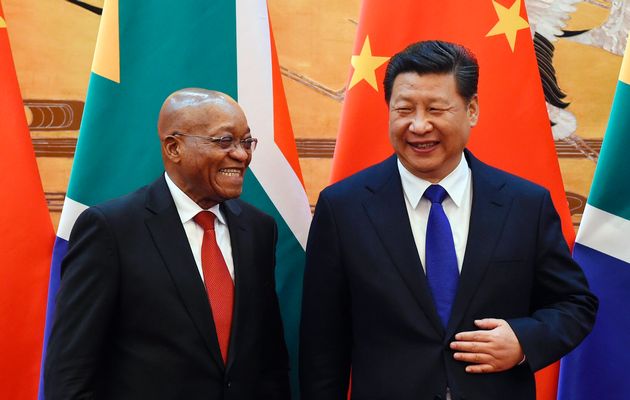 Plans by the government to allow for Mandarin to be taught in schools in South Africa solicited umbrage from the teachers’ union and set social media and comment sections ablaze with fears of a Chinese “imperialism” in Africa and a new “colonialism”. What lies behind this absurd view?

My countrymen, who otherwise pretend to be alert to racism and outraged by the sickening xenophobic attitudes and violence towards foreign nationals from elsewhere in Africa, seem to have a blind spot when it comes to the Chinese.

“Yellow Peril” opinions abound and often pass unquestioned in the media or on radio talk shows. Otherwise respectable people talk of the Chinese not as if they are individuals who have migrated from a vast country to South Africa in search of a better life, each with their own family, history and unique circumstances, but speak as if all Chinese are members of a fifth column for some nefarious world-domination project cooked up in mainland China. How awful if we South Africans were ever to be so closely identified with our government when abroad.

Among the old order middle classes, the mere mention of China in a headline seems to set off alarm bells. Call it a new form of colonialism or resource stripping if you are an African nationalist. Or if you’re a liberal you might cast it as aggressive mercantilism and shady foreign relations. But China is singled out because it is China as opposed to North America or Europe, who are as guilty of exactly the same practices. And if people reflect on their attitudes honestly, they might detect that there is more a tinge of racism than a fear of China’s human rights record in their kneejerk resistance to China in Africa.

Most South Africans are unaware that tens of thousands of Taiwanese left for South Africa since 1994, and that the new immigrants came first mostly from Jiangsu and Zhejiang provinces, and then in the past decade largely from Fujian.

Although there has been a sharp increase in numbers, far less than 1% of South Africa’s population is of Chinese origin. They are a minority, but psychologically perceived as a mass, as if individual recent immigrants are somehow attached to the vast numbers of their famously large population back home. And yet, the same attitude is not held towards Indian immigrants and tourists to South Africa, though India actually has a larger population than China.

Negative attitudes arise from paranoid nationalism, a lack of familiarity with the Chinese community and entrenched racial stereotypes. People usually sensitive to racism thoughtlessly speak of the “inscrutable” Chinese. South Africans lump all Chinese together and are quite oblivious to tensions within the Chinese community, especially between the more established Chinese who harbour their own prejudices against less educated recent immigrants. Not all South African Chinese even share the same home language. In Boland towns, locals call them ‘Japs’. Need one really add that I know many South African Chinese who would vomit at the idea of eating dogs.

It is also unashamed racism that allows a tiny criminal element (mostly not even Chinese) to shape a perception of an entire and innocent population and treat them with suspicion. Suddenly, all Chinese are rhino horn smugglers and abalone poachers! The reality is that the foot is on the other shoe, it is the Chinese who find themselves a prime target of South African criminals and thugs.

Commonly, people point to the insularity of the Chinese, without a thought for the extent to which that isolation is not self-imposed, but because of language difficulties and ostracization by locals. It should really be up to the locals to welcome the stranger. Many Chinese suffer greatly from this isolation.

Interviews conducted by researchers with recent Chinese immigrants in rural towns in the Free State found that a significant number of them felt they were worse off than they had been back in China. They were struggling financially and victims of crime and prejudice.

The most recent spate of irrational anti-Chinese outbursts arose in August from a move sanctioned by the education department to allow for Mandarin to be taught in South African schools.

One gets that there is anger because our education system is dysfunctional and the government hasn’t exercised the political will to even teach local languages. But many foresighted, rich South Africans (and parents all over the West) have been sending their children off for private lessons in Mandarin. It’s a smart thing to do. As a bonus, the Chinese government is prepared to support it in the schools.

South Africa stands to benefit greatly from Chinese migration. The many small businesses they create make other businesses possible and are a rapid job creator for locals. South Africa’s biggest single trading partner is China, which since 2009 surpassed the United States not only in trade with South Africa, but Africa as a whole. South African exports to China from January to June 2015 were R47billion, 60% of it minerals; imports were R91.3billion, nearly half of that classified as machinery. That’s a big trade deficit, hence the South African Reserve Bank’s three-year bilateral currency swap agreement with the People’s Bank of China for R57billion.

Some shrewd analysts think the only way South Africa will grow economically is if it becomes a mercantile gateway looking north. Government’s New Growth Path virtually implies this. For a host of reasons, migration and trade may well be the rescue of the South African economy as our government seems hopeless at central planning or implementing any sensible policy.

But South Africans need to be wary of the ruling party’s love-in with China. The ANC has been sending its officials on mentoring trips for years now and China is known to have given millions to the ANC party coffers. Jacob Zuma has led major delegations to China in 2010, 2012 and 2014. China’s version of democracy is not the version we want. And a weak state, such as Zimbabwe, can easily slip into clientelism with such an asymmetrical relationship as having China as an intimate partner. Ironically, South Africa must not kow-tow but show its autonomy if it is to fully benefit from its interactions with China. And we should welcome and not fear Chinese trade and migration. You might want to start those Mandarin lessons soon.

Source:  Brent Meersman, This is Africa