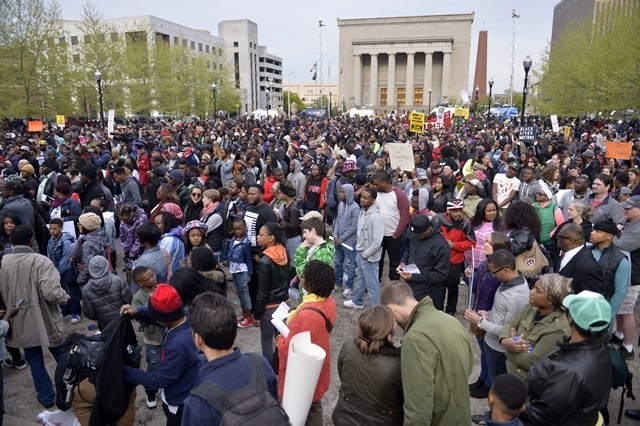 Hundreds of demonstrators hold a rally and march to protest against police brutality and the death of Freddie Gray, in front of the City Hall of Baltimore, Maryland, the United States, April 25, 2015. Protests continued for days in Baltimore against the overuse of police force surrounding the death of Freddie Gray, a 25-year-old black man, in local police van. (Xinhua/Yin Bogu)

Group of demonstrators under the banner “Put South Africa First” on Wednesday marched to the Nigerian Embassy in Pretoria to voice their concerns about criminal activities which they said were being committed by foreign nationals in the country, local media said Thursday.

The group, which is made of different organizations, said that foreign nationals and undocumented migrants were fueling human and drug trafficking in South Africa.

One of the organizers Ike Khumalo told demonstrators that the constitution must be “amended” in an effort to prioritize locals.

Nigeria’s Ambassador to South Africa Kabiru Bala accepted the memorandum from the demonstrators.

“You’re the people that are living with them and they are also living with you. If they commit crimes, you know where to go. As far as Nigeria is concerned, we related with South Africa very well,” he told the demonstrators.

He said institutions established to deal with criminal activities should handle them.

“If a Nigerian commits a crime, there’s regulation, there’s protocol and institutions and you should use them to try them,” said Bala, adding that he would not allow Nigerians to be profiled as criminals in South Africa.

The view of Nigerians as drug dealers, human traffickers and internet scammers, spurred attacks by South Africans on various occasions. Recent Attacks took place in 2009, 2015 and 2019, leading to the deaths and injuries of many poor Nigerians.

Disclaimer: News Ghana is not responsible for the reportage or opinions of contributors published on the website.