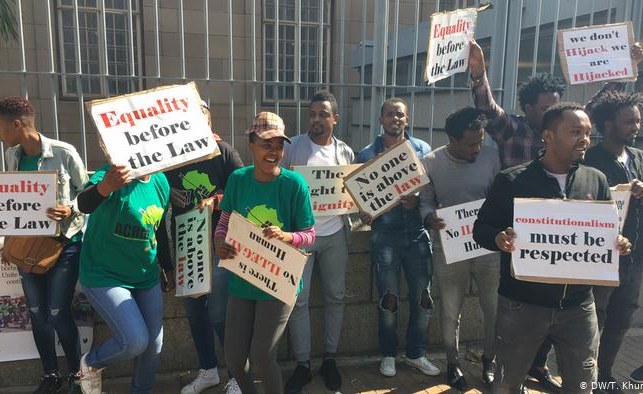 South Africa’s Minister of Small Business Development is pushing a radical solution to last month’s clashes between locals and foreigners over jobs: Ban the foreigners. At least, ban them from jobs in the informal economy, says Minister Khumbudzo Ntshavheni.

A ban on migrant workers in salons, small shops, and as street vendors would prevent recurring fights with locals competing for those jobs, Ntshavheni said.

Anti-immigrant violence that swept South Africa in September left at least 12 people dead, most of them South African nationals. The violence prompted Nigeria to repatriate hundreds of its citizens while Malawi repatriated at least 75.

But Chairman of the African Diaspora Forum Vusumuzi Sibanda said the minister’s suggestion is shocking.

“We are opposed to it because that is a violation of the constitution,” he said. “It is not only cruel, but inhumane. So, it means that people will be actually closed off from getting any means of survival and supporting their families, which is all what these people want considering what they have run from, in their countries.”

Zimbabwean Samantha Dube, 29, runs a nail and hair salon where she trains her workers with new skills.

Get the latest in African news delivered straight to your inbox

We need to confirm your email address.

To complete the process, please follow the instructions in the email we just sent you.

There was a problem processing your submission. Please try again later.

Banning foreigners from certain jobs could also have a negative impact on South Africa’s economy, which competes with Nigeria’s as the biggest in Africa.

The Sustainable Livelihoods Foundation in 2010 found that nearly half of small groceries in Cape Town were run by foreigners.

The number of foreign-run small businesses is even higher in South Africa’s Gauteng Province, where many migrant workers live.

Nigus Temesgen is a member of the United Ethiopia Community Association of South Africa, whose members work mostly in the informal economy.

“When we are selling belts, socks, so many small materials on the public areas, especially around taxi ranks and bus stations, we are also benefitting the economy,” Temesgen said. “And the government must help people, support people. This is unnecessary. We are all Africans.”

But for Minister of Small Business Development Ntshavheni, South African nationals should come first — even with informal jobs.

As the issue is debated in the Cabinet, migrant workers in South Africa wait nervously and hope that other ministers disagree.