He was nicknamed “Prime Evil” for his role in the killing and maiming of activists fighting white minority rule in the 1980s and early 1990s.

Justice Minister Michael Masutha said De Kock would be released “in the interests of nation-building”.

De Kock, 66, was sentenced in 1996 to two life terms in prison and a further 212 years for the crimes he committed.

Mr Masutha said the time and place of De Kock’s release would not be made public.

The justice minister stressed that his decision was guided by South Africa’s constitution.

Sandra Mama, widow of Glenack Mama who was killed by De Kock in 1992, said she thought the minister was right in granting parole.

Sandra MamaWidow of a man killed by Eugene de Kock

“I think it will actually close a chapter in our history because we’ve come a long way and I think his release will just once again help with the reconciliation process because there’s still a lot of things that we need to do as a country,” she told the BBC.

The former colonel was head of the notorious Vlakplaas police unit.

He appeared before the Truth and Reconciliation Commission (TRC) which was established a year after South Africa’s first democratic elections in 1994.

De Kock confessed to more than 100 acts of murder, torture and fraud, taking full responsibility for the activities of his undercover unit. 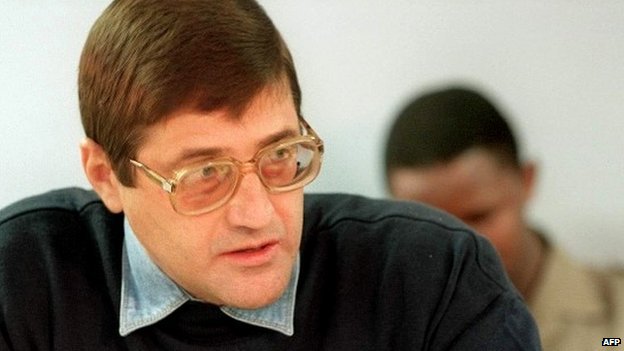 The former police colonel appeared before the Truth and Reconciliation Commission

Has justice been served?

He was granted amnesty for most offences but the TRC only had the power to grant amnesty to human rights violators whose crimes were linked to a political motive and who made a full confession.

During the TRC hearings, he described the murders of a number of African National Congress (ANC) members, in countries including Lesotho, Swaziland, Zimbabwe and Angola, naming the police commander above him in each case.

Ms Mama said that in her opinion, De Kock had been held responsible for the orders of others.

“He got the instructions from the top and they got away with it. They’re living, you know… they’re amongst us today and one man is taking the fall,” she said.

Whilst in prison he did a radio interview in 2007, accusing South Africa’s last white ruler FW de Klerk of having hands “soaked in blood” for ordering specific killings.

The former president denied the allegations, saying his conscience was clear.

De Kock also made contact with some of his victims’ families while in jail, asking for forgiveness.

Eddie Makue, who worked for the South African Council of Churches when its headquarters was bombed in 1988, said he was ambivalent about the announcement.

“It’s mixed feelings, which is something we’ve gotten used to as South Africans,” he told the Associated Press news agency.

The justice minister also announced that he was not granting parole on medical grounds to another convict in jail for apartheid-era crimes.

Mr Masutha said former MP Clive Derby-Lewis, who was involved in the assassination in 1993 of Chris Hani – the popular Communist Party politician and leader of the ANC’s armed wing – had not shown any real remorse.

The murder sparked riots and fears for the transition to democracy ahead of the 1994 elections.