Shot and Killed While Running Away 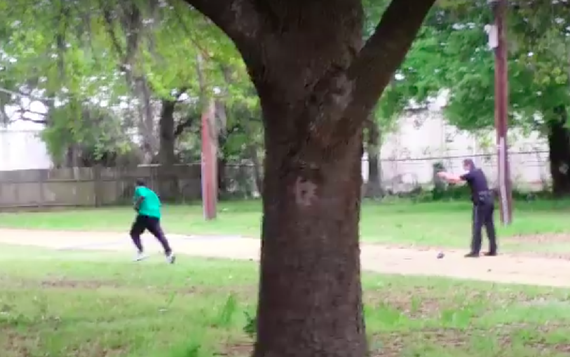 South Carolina prosecutors charged a police officer with murder on Tuesday, after video surfaced showing him shooting a fleeing, apparently unarmed man in the back multiple times, after a traffic stop.

The arrest of the North Charleston officer, Michael Slager, comes after a series of high-profile deaths of black Americans at the hands of police officers last year prompted a national debate over policing, racism, and the use of deadly force. Last month, President Obama outlined proposals for police reform based on a task force report commissioned after incidents in Ferguson, Missouri and New York. Slager, the 33-year-old police officer, is white; Walter Scott, the 50-year-old victim, was black.

According to local reports, Slager pulled over Scott for a broken tail light on his vehicle on Saturday afternoon. A police spokesman originally told media that Scott had taken the Taser from Slager and attempted to wield it against the officer, at which point Slager drew his weapon and shot Scott.

A video posted online by The New York Times, taken by a bystander on a cell phone, depicts a different scene. It shows Scott and Slager interacting in close proximity to one another in an open, grassy area. Scott then turns and begins to run away from the officer. As Scott flees, Slager pulls his gun from its holster and fires eight shots at Scott, who crumples to the ground near a tree. Slager walks toward him, speaking into his radio, tells an unresponsive Scott to put his hands behind his back, and then places him in handcuffs. No attempt to render first aid is depicted in the Times video until other officers arrive on the scene. Scott subsequently died of his injuries.

Slager reportedly told investigators that Scott had taken his Taser, giving the officer reason to fear for his life. Footage shows Slager saying, “Shots fired and the subject is down. He took my Taser.” Scott does not appear to be carrying a weapon of any kind in the video while fleeing from Slager. The video also shows Slager stooping to pick up an object near the scene of the original scuffle, and later tossing an object from his belt near Scott’s body.

Scott joins the list of unarmed black Americans whose deaths at the hands of police were recently documented on camera. In New York, bystanders filmed the death of Eric Garner, who repeatedly shouted, “I can’t breathe,” as multiple NYPD officers placed him in a chokehold during an arrest for allegedly selling loose cigarettes. Grainy footage from a nearby surveillance camera captured the death of Tamir Rice, a 12-year-old who was shot by Cleveland police in November while playing with a toy gun in a local park. A Staten Island jury declined to bring charges against NYPD Officer Daniel Pantaleo for Garner’s death in December. Rice’s death remains under investigation.

South Carolina has also seen its own share of policing controversies in recent years. Last September, State Trooper Sean Groubert was fired and charged with aggravated assault and battery for shooting and wounding a black man who reached for his ID in a parked car. In 2011, local NAACP leaders accused North Charleston police of racial profiling during traffic stops, alleging that young black men were stopped four times as often as young white men. Calls to the local NAACP chapters on Tuesday night were not immediately returned.