SHARE A COKE: HOW THE GROUNDBREAKING CAMPAIGN GOT ITS START ‘DOWN UNDER’ 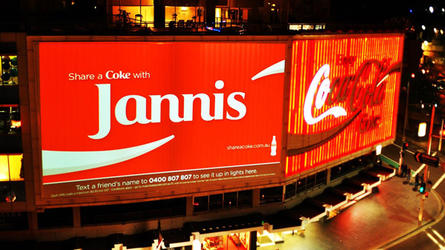 The moment Lucie Austin saw her name on a Coke bottle, she knew her team had a hit on its hands.

“My reaction was childlike,” she recalls. “I knew many others would have the same reaction.”

Austin, who at the time was director of marketing forCoca-Cola South Pacific, was huddled with her colleagues inside a Sydney conference room in 2011, listening to five agencies pitch concepts for Coke’s next summer campaign. A couple of weeks prior, they’d received a 151-word creative brief that gave them free reign to deliver a truly disruptive idea that would make headlines and capture the country’s attention.

The resulting campaign, known internally as “Project Connect” based on its ambition to both strengthen the brand’s bond with Australia’s young adults – and inspire shared moments of happiness in the real and virtual worlds – became known as “Share a Coke.” The first-of-its-kind campaign celebrated the power of the first name in a playful, social way by swapping out Coke branding on bottles and cans with the 150 most popular monikers in Australia.

That summer, Coke sold more than 250 million named bottles and cans in a nation of just under 23 million people. The campaign has since made its way around the world, reaching more than 70 countries, to date. Coca-Cola teams from Great Britain, to Turkey to China – and, most recently, the United States – have put their own creative spin on the concept, while preserving the simple invitation to “Share a Coke with (insert name).”

We recently caught up with Austin, who now runs marketing for Coke’s Northwest Europe and Nordics (NWEN) business unit, and another of the principal “Share a Coke” architects, Jeremy Rudge (creative excellence lead), to learn how one of the brand’s most compelling campaigns in recent memory got its start Down Under.

What business factors or research inspired ‘Share a Coke’?

LA: Our research showed that while teens and young adults loved thatCoca-Cola was big and iconic, many felt we were not talking to them at eye level. Australians are extremely egalitarian. There’s a phrase called “tall poppy syndrome.” If anyone gets too big for their boots, they get cut down like a tall poppy. By putting first names on the packs, we were speaking to our fans at eye level.

JR: Australia is one of the world’s most developed markets, which means growth is hard. We have a rich history of effective, innovative marketing. A few years ago, we created “Bottle Blast”, a campaign that eventually spread to 80 markets. It defined why people loved Coke, but it wasn’t making them buy more of it. Coke had become too familiar, too predictable. We were given a clear challenge by the head of the Pacific region to do something extraordinary. I remember Lucie saying, “We need to come back with something that makes everyone sit up because of its impact …and we only have a few weeks.”

Describe the creative brief and the concepts that came back.

JR: With no time to dwell on strategy, we wrote a clear and completely open brief that gave our agencies everything they needed to know as quickly as possible and full license to come up with their best stuff. We engaged our key creative partners in Australia, and one from Singapore. We told them, “That idea you’ve got tucked away that you’ve always wanted to do for Coke? Now’s the time for that idea.”

JR: Despite the tight timeframe, the response was incredible. We had a full day of pitches. The second agency to pitch sold to us with a standout visual – a wall of Coca-Cola cans stacked horizontally, each with a name written in the Spencerian typeface. Fifteen minutes later, Ogilvy, our incumbent agency, came in and presented exactly the same idea in the same way. It was an extraordinary coincidence… one of the most bizarre moments I’ve ever seen in advertising. In the end, we went with our existing agency, Ogilvy, due to our long history with them.

Once you had the idea, how did you bring it to market?

JR: There was a great deal of nervousness internally. Not so much about the idea, but about the scale of approvals we’d need to go through, and ensuring we had accounted for all risk factors. There were countless late-night conference calls with the global team in Atlanta, risk assessment meetings, and conversations with trademark counsel, bottling partners and other stakeholders.

The real creativity kicked in when we had to bring the idea to life and problem-solve the “how.” Originally, the idea was conceived with the names printed in the traditional “Coca-Cola” Spencerian script. We couldn’t do that due to trademark issues, so we created a brand-new typeface inspired by the “Coke” logo. We call it the “You” font because it’s about you, the consumer, not Coca-Cola. That typeface really made the campaign and has since been used across the world in different ways including for a global Coca-Cola Christmas campaign. We also had to figure out how to get the Coke red color exactly right on the digital printers we used to label the packs, which took a long time.

How many names did you use at first?

JR: We started with 150. We knew we were only going to reach 42 percent of the population, even if we added generic names like Mom, Dad and Mate, so we purposefully made the invitation more aboutgiving a Coke to someone else rather than keeping it to yourself. The sentiment of “sharing a Coke” with someone else broadened our appeal. The digital experience enabled people to send a virtual Coke to someone else via Facebook. As the campaign gained popularity, we did a second release where we let consumers vote for the next wave of names.

Members of the Coca-Cola South Pacific team atop their offices in Sydney, Australia.

Do you remember the initial reaction?

JR: We intentionally seeded the campaign with opinion leaders and influencers to get them to them lead the conversation and encourage others to seek out “Share a Coke” for themselves. Celebrities were picking up the bottles and talking about them without any formal connection to us. Pretty much immediately, we knew we were on to something. Social media chatter and media coverage blew up. Google search rocketed. We always thought it would be big; we were just nervous about getting to market and getting it right. So when it launched with a bang, it was more of a relief than a surprise.

What surprised you most about the response?

LA: We were surprised by the degree to which consumers played with the idea and made it their own. I remember my husband and I driving past a church and noticing a sign with slotted letters, like Scrabble. It read, “Share a Coke with a Christian.” I thought, someone has taken the time to do this. I thought it was wonderful.

JR: The overwhelming demand for the personalized cans surprised us. They quickly became a must-have object of desire. We sent traveling kiosks, which consumers could visit to customize a can of Coke, to major shopping malls across the country. The queues stretched around the block… our products became the Christmas gift of the year [summer in Australia falls over the holidays]. Kids would usually line up for Santa’s Grotto to have their picture taken. I remember seeing the activation in Westfield, where poor Santa had no one to put on his knee!

Another surprise was that people were buying Cokes to show people they cared for that they missed them… from soldiers overseas in Afghanistan, to loved ones in hospital, to long-lost friends. We hadn’t really anticipated the packs being used in this emotionally powerful way. It was an example of how the public took the idea and shaped it themselves.

What were seen as your biggest risks?

JR: We gave people the opportunity to “Share a Coke” with someone via the big, iconic digital sign at King’s Cross in Sydney. They texted us the names they wanted to see on the screen. We knew people would want to publish profanity and abusive language, so we had to put filters in place. We came up with a “block list” of over 5,000 words our printers literally could not print and the sign could not display. Getting there was a pretty funny process. We had some very senior people in a room literally brainstorming swear words. Not surprisingly, more than half of all texts sent were rude words we couldn’t use, so the profanity filter worked.

Also, managing in social media was still relatively new for brands. It was the first time we’d had digital at the heart of a campaign. Instagram had only 10 million users worldwide at the time and wasn’t factored into our planning. The markets that followed us had an entirely new channel to work with.

Is there a specific moment where you realized the campaign’s pop culture impact in Australia?

JR: I remember going to the finals of a standup comedy competition in Sydney, where 12 acts were doing short sets. Five of them had jokes related to “Share a Coke” – they used it to connect with the audience. That sealed it for me.

Where did the idea go from Australia?

JR: New Zealand was second, then Asia. China was the most interesting one; they used nicknames on the cans. After the 2012 Cannes Lions festival [where the campaign picked up seven awards], the whole world was interested. We started getting emails from countries asking us how they could launch “Share a Coke”, so we built a toolkit to scale the idea.

LA: I’ve actually gotten to live “Share a Coke” four times – in Australia, then New Zealand and in Europe twice – so I’ve seen it’s journey first hand. Every country has put a new creative twist on the idea. Great Britain, for example, celebrated the birth of the royal baby by inviting the world to “Share a Coke with Wills and Kate” on the iconic Coke sign in Piccadilly Circus. Amsterdam opened a pop-up store that exclusively sold personalized bottles and cans of Coke. Germany set up online store where you could order personalized bottles to be delivered for home delivery. We’ve reapplied the German on line store idea in NWEN this year. Turkey projected a virtual vending machine on a wall over Valentine’s Day to entice couples walking by. And South Africa created the adorable TV commercial, “Bobby”, which has been one of Coke’s highest-scoring ads ever.

If you had to do it all again, what would you do differently?

JR: We’d probably spend a fraction of what we spent on TV. As I said, there wasn’t the confidence in social media then that there is now. “Share a Coke” showed that this new landscape was here. There is still a belief in the marketing world that you need to spend big on media to make sure people see your ideas, but “Share a Coke” proved that you can focus your resources on building ideas people want.

Why do you think ‘Share a Coke’ has been such an international success?

LA: At the end of the day, our name is the most personal thing we have. It’s our fingerprint… our identity… in one word. We gave consumers an opportunity to express themselves through a bottle of Coke, and to share the experience with someone else. The fact that your name is on a Coke bottle, it can’t get more personal than that! The campaign capitalized on the global trend of self-expression and sharing, but in an emotional way. Coke is big enough to pull off an idea like this, which speaks to the iconic nature of the brand. Who would want their name on a brand unless it was as iconic as Coke? “Share a Coke” found the sweet spot by making consumers famous through the most iconic brand in the world.