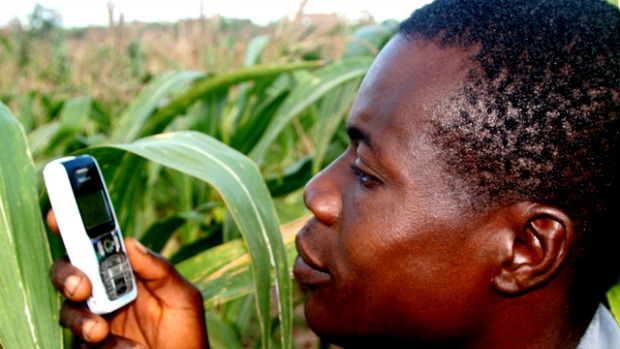 A recent report underscores the proliferation of cell phone use in sub-Saharan Africa.

According to the Pew Research Center survey, Africa has all but skipped the “landline stage of development.”

The growth has been exponential.

In 2002, only one tenth of the populations of Tanzania, Uganda, Kenya and Ghana owned a mobile phone, said Pew.

“Across the seven countries surveyed, roughly two-thirds or more say they own a cell phone,” according to Pew. “Ownership is especially high in South Africa and Nigeria, where about nine-in-ten have a cell phone.” Mobile phone penetration in South Africa and Nigeria, in fact, rivals that of the U.S., where 89 percent of American adults own a cell phone. Over 7,000 Africans were surveyed in Ghana, Kenya, Nigeria, Senegal, South Africa, Tanzania and Uganda from April to June last year.

African mobile phone owners use them mostly to sent text messages and to take pictures or video, the survey revealed. In some countries, such as Kenya, Uganda and Tanzania, the survey found that mobile banking was a popular use of cellphones.

Additionally, the survey found that accessing social networks was a popular use of mobile devices, particularly in Nigeria and South Africa.

Smartphones are less common, but are gaining ground, according to Pew. About one third of South Africans reported having a smartphone, compared to about one in four Nigerians. Sixty-four percent of Americans have a smartphone, the survey said.

“Three-quarters of Ugandans who speak or read at least some English own a mobile phone, while only about half of those with no English language skills own one,” according to Pew. “And one-third of English-speaking Nigerians own a smartphone, compared with 2 percent of Nigerians who do not have the ability to read or speak at least some English.”

Men were also more likely to own a mobile device, according to Pew, which, for example,  reported that  77 percent of Ugandan men own a mobile phone, while only 54 percent  of Ugandan women do.

Landline penetration, by comparison, “is close to zero,” the survey revealed. Only about 2 percent reported having one. In the U.S. 60 percent of Americans have a landline.