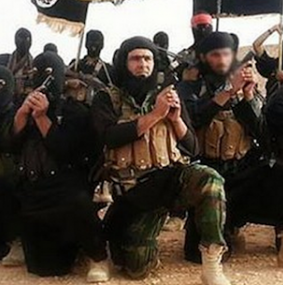 US Intelligence report suggests that racism will keep ISIS operating in Northern Africa from teaming up with Boko Haram. Amen! Read report below…

Long before ISIS militants beheaded Christians on a Libyan beach last week, Nigeria’s Boko Haram was carrying out similar atrocities 1,500 miles to the south. Now that ISIS is operating in northern Africa, will the Syria-based organization join forces with the continent’s largest Islamist terror group? Maybe not, say U.S. intelligence officials, and they suggest one obstacle is racism.

The Arab world is incredibly racist,” explained a U.S. intelligence official. “They don’t see black Africans as equivalent to them.”

ISIS may show “affinity” with Boko Haram, said the official, “but they stop short of allegiance.” Moreover, said the official, while Boko Haram has in the past year released videos to show “affiliation” with groups like ISIS, there’s no evidence of either group sending members to fight with the other. And while Boko Haram has praised ISIS, and shown the ISIS flag in videos, ISIS has not reciprocated.
“There are still questions of the ISIS view of Boko Haram and Nigeria,” said the official. “But Boko Haram does not operate in sync with ISIS. The caliphates are separate.” There was concern last October when Boko Haram declared its caliphate that the two might team up, but there’s no indication that’s happening, said the official.
The groups differ in many ways. Both use social media, but the ISIS campaign is much more sophisticated – using more than 20 languages — and attempts to communicate the Islamic rationale for its operations. Boko Haram posts increasingly slick videos on the web, like one released Tuesday that threatens the leaders of Cameroon, Benin and Chad, but its prime recruiting tool is older and simpler than social media. “Boko Haram,” said one official, “uses fear.”
The governance of their respective caliphates also differs. ISIS attempts to replace the bureaucracies it found in conquered territories with its own, while Boko Haram has been satisfied simply taking over villages and cities and establishing Sharia courts that mete out rough justice.
ISIS has more “hardcore” soldiers than Boko Haram — about 26,000 to 31,000 compared to 4,000 to 6,000. ISIS is also more attractive to foreign fighters, with an estimated 2,700 Westerners having fought for the group. Intelligence officials say that other than a few fighters who’ve crossed the border into Nigeria from Cameroon, Chad and Niger, the numbers of foreign fighters in Boko Haram are negligible. There’s no evidence, they say, of any North Americans or Europeans fighting in Nigeria.
But even if there is no link beyond shared values between the groups, ISIS may be a role model for Boko Haram, said Michael Sheehan, chairman of the Countering Terrorism Center at West Point. He said he’s “not sure” Boko Haram would’ve “gone the caliphate route” if ISIS hadn’t done so first.
“Each of them has been successful, reinforcing their own optimism, and that’s not insignificant,” said Sheehan.
And there is little difference in the level of violence perpetrated by the groups. An intelligence official told NBC News that many of the attacks and atrocities carried out by the Nigerian group have not been publicly reported publicly.
The two groups also share a crucial asset: a charismatic leader. Intelligence officials say that just as Abu Bakr al-Baghdadi’s persona is central to ISIS, Abubakar Shekau’s “fiery persona” has made him a strong commander-in-chief of Boko Haram — one who would be difficult to replace.
“Everything starts with Shekau,” said an intelligence official. “There doesn’t appear to be a charismatic leader below him.” Officials note that in videos made since the announcement of the caliphate, like Tuesday’s, Shekau has presented himself less as a militant and more as a leader.
(0 votes) 0/5
Share on facebook
Facebook
Share on twitter
Twitter
Share on linkedin
LinkedIn
Share on whatsapp
WhatsApp
Share on email
Email