President Obama Interviewed by YouTube Stars: Not a Train Wreck!

So what does democracy look like in the social media age? Maybe it looks like a YouTube star wearing green lipstick, offering the president some merch to give to “your first wife.”

Of course, this was a mere slip of the tongue (conflating “your wife” with “first lady”), and Barack Obama laughed it off (wondering aloud if the YouTuber knew something he didn’t).

But it was also one of many highly tweetable moments in a live-streamed exchange, orchestrated by the White House, between the president and several popular YouTubers on Thursday evening.

Welcome to the slightly silly, super-Webified future of politics in America.

This unlikely-sounding event was itself the culmination of what must have been the most elaborate effort ever to turn a State of the Union address into a multiday, transplatform, new media event.

This onlineapalooza started before the actual address, when thespeech’s full text was released early on the website Medium, which was started by a co-founder of Twitter. It continued in the form of a Web stream of the speech “enhanced” by 127 slides and what the White House called a “river of content.” And it culminated 48 hours later in “The YouTube Interview with President Obama.”

The Obama administration has a long track record of digital experimentation — from its welter of social media accounts to a presidential Reddit “Ask Me Anything” turn and an appearance on Zach Galifianakis’s silly online show “Between Two Ferns.”

But still. There’s something remarkable about the president devoting the better part of an hour to the YouTube Nation. His questioners:Bethany Mota (known for her expertise on beauty products and makeup tips), Hank Green (who video-blogs with his brother, John), and GloZell Green (a comedic performer whose green lipstick is a visual signature and who once ate cereal out of a bathtub). Each solicited questions from her or his millions of YouTube fans and arrived at the White House to ask them.

At first, there was something vaguely surreal about watching this actually happen. (And predictably, an accompanying chat room was a depressing embarrassment.)

But after a few minutes, it all made a certain kind of sense. The topicswere generally thoughtful and never really shocking — political gridlock, North Korea, race relations, and so on. The answers were, frankly, pretty much what you’d hear on “Meet the Press.” The difference had less to do with substance than style.

Hank Green was earnest and a little fidgety. GloZell Green was the most unusual — apart from the green lipstick and the “first wife” slip-up, she referred to Fidel Castro as “the guy [who] put the dick in dictatorship” and made a point of mentioning her huge fan base. Mota closed out with a “lightning round” that included asking the president what superpower he’d like to have. (Answer: ability to speak any language.)

The audience hovered between about 80,000 and 90,000 viewers. So was this a watershed moment in speaking truth to power? Well, no. But it was more than a publicity stunt. The actual State of the Union broadcast had the smallest television audience for any such speech in the past 15 years. There are a lot of reasons for that, but one is that — as you know — the nation no longer gathers as one around television sets. (The White House says its stream gathered 1.2 million viewers, many using mobile devices.)

That’s why the real point of this is exercise was revealed in the form of one of Mota’s question: She is 19, and with disarming frankness she pointed out that a lot of her young fans simply don’t care about politics and would be interested in hearing why they should.

Obama suggested that if they cared about college tuition or gay rights or the environment, then they had to care about politics. 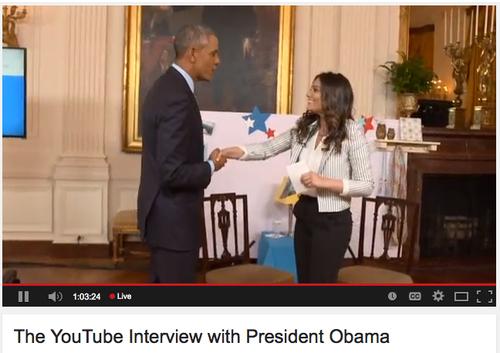 Sounds obvious enough (and at a certain point Obama’s response verged on the condescending). But it’s becoming increasingly inescapable that if politicians want to deliver any sort of message, they’ll need to fight through the media clutter and arrive in a place where people are actually spending time.

And if YouTubers (in green lipstick or otherwise) are one means to that end, then that’s who they’ll have to have deal with.