President Obama in Kenya: Prodigal son returns – but can he bring much needed change to his father’s homeland? 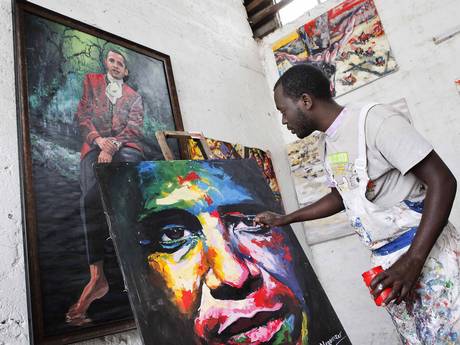 Evans Kidero, Nairobi’s ebullient governor, is chuckling over a Twitter hashtag that is drawing a lot of attention. It’s #KideroGrass, a wry reference to the massive preparations the city is making ahead of Friday’s arrival of US President Barack Obama, in particular the planting of new grass that will not grow in time.

Mr Kidero insists it’s not the timing that’s at fault, but his citizens. “We plant grass every year, but our people stamp on it and kill it,” he grumbles. “Keep off my grass.”

In the past few weeks, Kenyans have watched city officials gird themselves into action: street children have been ousted from the city centre, roads leading to the presidential residence have been newly paved, and street lamps are going on for the first time. Reservations along the highways Mr Obama is expected to travel have been planted with trees and flowers – as well as that grass. “He should come every year,” quips Isaac Masisa, a Nairobi businessman.

A street seller offers posters and T-shirts in Nairobi (Getty)
“In African culture, when you receive important visitors, [such as] your in-laws, the house must be spruced up,” Mr Kidero toldThe Independent. The plans had long been in the works, he claimed, but the visit had provided “that oomph”.

Mr Obama is making his first trip to his father’s birthplace since becoming President in 2009, a highly symbolic visit that many see as a homecoming of the prodigal son.

With that comes a mountain of preparation. Many in the capital are focused more on the cosmetic changes than on the substantive political issues that Mr Obama is expected to raise with his Kenyan counterpart, Uhuru Kenyatta, such as the spectre of al-Shabaab, the terror group that has hit Kenya so mercilessly.

Equally absorbing to Kenyans is the confusion over the disruptions that Mr Obama will bring in his wake. Airlines and motorists are likely to be inconvenienced, but perhaps not as much as had been feared, early reports suggesting Kenya’s airspace might be locked down for 72 hours.

Nevertheless, the government has drafted thousands of policemen into the capital for the duration of the visit, and drivers are grumbling at more frequent roadside checks, typically an opportunity for police to extract a bribe.

Artist Yegonizer works on a painting of Barack Obama ahead of his first visit to the country since his becoming President (Getty)
Beyond the hype, however, Kenyans are looking to the US President to press Mr Kenyatta on the corruption that has allowed terror to flourish, and the civil and human rights abuses that have shaped the government’s efforts to thwart the insurgency.

“Obama’s coming is a godsend,” said Ezra Omondi, a 34-year-old philosopher, referring to political rollbacks and the worsening economic outlook. “[He] is not just coming as another US President, we are talking about a President with Kenyan roots. It will have an impact.”

Mr Obama has avoided Kenya since becoming president in the wake of disputed Kenyan elections and issues at home. As long as Mr Kenyatta, who took the helm in 2013, faced charges at the International Criminal Court over ethnic violence in the wake of the 2007 polls, the visit remained off the cards. The case was dropped last year, but his Deputy President, William Ruto, is still on trial.

However, analysts think Mr Obama will, in public at least, be restrained in recognition of critical security co-operation. “I expect him to take a softly, softly approach,” said Nic Cheeseman of Oxford’s African Studies Centre. “I suspect that much harder things will be said behind closed doors.”