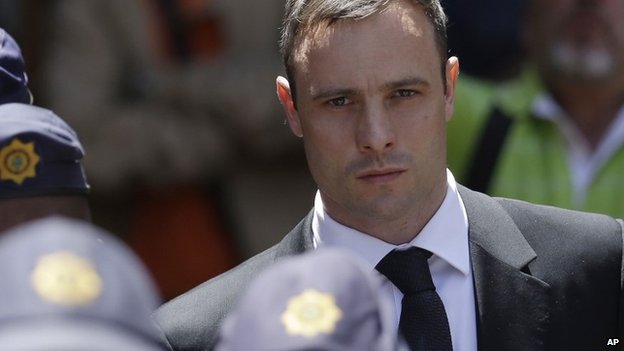 Lawyers for jailed South African Olympic athlete Oscar Pistorius have launched a legal bid to prevent prosecutors from appealing against his acquittal on murder charges.

Judge Thokozile Masipa ruled in December that prosecutors could appeal against the acquittal.

She had sentenced Pistorius to five years in prison for the lesser charge of culpable homicide, or manslaughter.

He said he mistook her for a burglar, while prosecutors argued that he shot her after a row at his upmarket home in the capital, Pretoria.

The double amputee athlete was acquitted by Judge Masipa of both premeditated murder and the lesser murder charge of dolus eventualis, also known as common-law murder.

In South African law, this charge applies if the accused knew they might kill someone but still went ahead with their course of action.

Prosecutors argued that Judge Masipa misinterpreted the law when she cleared Pistorius of murder on the basis that he did not intentionally shoot Ms Steenkamp.

Giving them permission to appeal in December, she said: “I cannot say… that the prospect of success at the Supreme Court of Appeal is remote.”

The BBC’s Milton Nkosi in Johannesburg says that defence lawyers are now challenging the judge’s decision, and do not want the culpable homicide verdict to be overturned.

On 13 March they will appear before Judge Masipa and intend to cite previous cases to back their argument that the appeal should not be allowed.

Pistorius was one of South Africa’s most celebrated sportsmen until his arrest.

He made history by becoming the first amputee sprinter to compete at the Olympics in London in 2012.