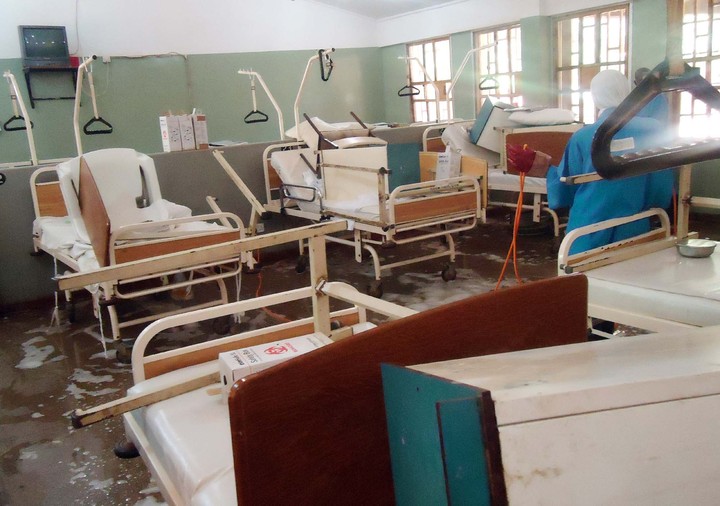 The Joint Health Sector Union has called off its two-month-old strike, following a meeting with President Goodluck Jonathan.

The suspension means workers resume Tuesday morning at their duty posts in hospitals, which have been left to doctors alone since November.

It came after JOHESU met with the president for the first time throughout its strike, according to JOHESU officials.

None of its previous meetings with government officials and resolutions in hopes of calling off the strike had ever been communicated to the president by the ministries of health and labour.

Both had earlier assured the reports of meetings would be tabled before the president but a delay lasting nearly five weeks worsened the strike.

JOHESU chairman Ayuba Wabba told Daily Trust the unions secured promises from the presidency that its demands would be considered shortly.

The extent of the demands and the timeline agreed for implementation are unclear, but the unions expect to revisit compliance soon after elections.

The demands go back to National Industrial Court rulings in 2013 in favour of JOHESU and collective-bargain agreements the unions want government to implement through official civil-service circulars.

The strike was plagued by accusations by doctors that striking healthworkers attempted to disrupt skeletal and emergency services at hospitals.

The unions have denied the claims.

But JOHESU denied the allegations, calling it an attempt by hospital management to break its strike.

The General Hospital at Gwarinpa, National Hospital, a research laboratory at University of Abuja Teaching Hospital, Federal Staff Hospital at Jabi were named by NMA as having come under assault since January 21.

It said JOHESU members invaded General Hospital, Gwarinpa on Jan 21, and “unleashed terror on all personnel who had kept the hospital functioning” in the wake of the strike since November when doctors have been left to man hospitals alone.

Dr Fatima Mairami, chairperson of NMA in the FCT, said “attackers broke down the entrance to the main block and that of the laboratory and shot canisters of tear gas within the hospital, causing severe respiratory distress to members of staff and defenceless patients, including premature babies.”

Mairami also accused JOHESU of deliberately locking up hospital equipment, consumables, reagents, theatres and labour wards and then disappearing with the keys, calling it unethical and a “clear breach of public service rules which require investigation, restoration and appropriate sanctions by the authorities of the affected health facilities.”

“If this emerging phenomenon is not quickly arrested and swiftly addressed at this point, we fear that these acts of lawlessness, brigandage and terror may blossom into full scale insurgency in the health sector and may finally collapse the ailing sector,” Mairami warned.

She also said a senior medical official at the hospital, named as Dr Eucharia Anunobi, an asthmatic, “nearly lost her life in the incident.”

“While we were attending to babies, we just heard a bang and everybody thought it was a bomb,” Anunobi told journalists. “We saw fumes coming out of the lab. The moment I inhaled it, I passed out.”

NMA said management of the hospitals involved have reported to the police and called for stronger security on their premises.

He said the JOHESU had been visiting hospitals to ensure full compliance with strike directive among its own members, after hospital managements began luring staff back to work, opening up attendance registers to trap staff who stayed away from work in defiance of the strike order, and hiring locum (temporary staff).

“We are only monitoring our members in various places, and it was in the process some of our members attempted to shut the door,” Faniran explained after being briefed on Thursday by officials, explaining that fumes from liquids in the lab could have affected Anunobi.

The union has insisted hospital managements, which have claimed hospitals have run smoothly with only doctors since November, are scheming to break the strike.

It came after Dr Jaf Momoh, chief medical director of National Hospital, where patient numbers have fallen to a current 90, told a media briefing that JOHESU should end its strike considering government magnanimity to pay December salaries for its members.

Secretary of JOHESU, Yusuf Badmus, said the “provocative activities” of CMDs were “an indication that they want to spoil JOHESU strike.

“When NMA was on strike, how many pronouncements did they make? Because they are realising that government wants to answer us, they want to spoil it,” Badmus said.

They insisted a cyclical routine in which health sector unions take turns to go on strike “has resulted in many avoidable deaths and suffering of Nigerians.”

For disrupting health services in Nigeria, the medical bosses said they have therefore encouraged quackery to thrive since they go on to discourage patients from accessing healthcare.

They also accused JOHESU for not waiting for the findings of presidential committee of experts on inter-professional relationship in the public health sector before ordering its members to down tools.

But the National President of Nigerian Nurses and Midwives Association, an arm of JOHESU, Abdulrafiu Adeniji called it “mischievous and criminal” for heads of public hospitals to accuse them of disrupting health services and contributing to deaths of patients.

“The same group of bosses of medical institutions in Nigeria are those that have bastardised health services in the country,” said Adeniji.

“They ganged up to block the implementation of court ruling which was in favour of JOHESU. They have misused their offices. Their accusation is both mischievous and criminal.”

The Chief Medical Director of Federal Neuro-psychiatric Hospital in Kaduna state, Dr. Taiwo Shiekh appealed to striking health workers to show patriotism and return back to work in the interest of the sick and the masses, saying the strike has brought setback to the health sector.

Similarly, the Medical Director of National Ear Care Centre in Kaduna, Aminu Bakare urged JOHESU to heed to calls by Nigerians to suspend the about three-month-old strike and resume work in the interest of the masses.

Addressing a press conference in Kaduna, Dr. Lateef said, “Even though, hospitals are working presently, they are not able to render all the services as expected.”

Dr Bakare appealed that JOHESU members “should resume work to rescue patients that are dying and also to enable Federal Government to fully prepare to meet their demands.”

Federal Medical Centre in Katsina mandated its doctors to scale up services in order to meet challenges being experienced across the country.

Its medical director Umar Abdulmajid said, “Our emergencies are up and running, operating labour rooms, speciality clinics, are open but we need others to work with, so please bear and return to work so that government can address the issues.”