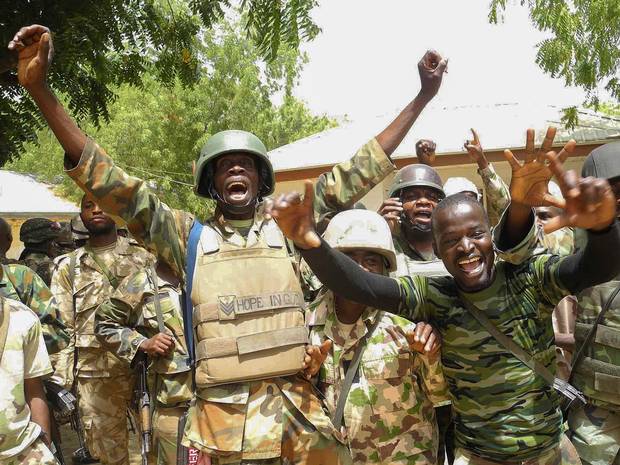 “Boko Haram is finished” shouts a soldier, dancing and waving his rifle with his troops.

The soldiers, from Niger, helped liberate the northern Nigerian town of Damasak from Boko Haram.

Arabic graffiti painted on walls and Boko Haram’s black and white flag fluttering on the dome of a mosque are among the few reminders of the Islamists’ four-month reign over the town, which forces from Chad and Niger freed this month.

The town’s recapture was the latest victory in a regional offensive that, analysts suggest, has turned the tide against the six-year insurgency.

“Troop morale is sky-high,” says Niger’s force leader Colonel Toumba Mohamed. “It wasn’t easy to push [the enemy] out, but we did and now they are reduced to almost nothing.”

Last year Nigerian forces scattered as Boko Haram, fighting to establish a “caliphate” in northern Nigeria, seized a swathe of towns  in Borno state and bore down on the regional capital, Maiduguri. By the start of this year, it controlled about 20 local government areas, a territory the size of Belgium.

In a dramatic reversal, Nigeria’s army said this week it had pushed the rebels out of all but three districts. The recapture of Baga, scene of one of the jihadists’ worst massacres, in January, was hailed as a major psychological victory.

Yesterday, Boko Haram, which has pledged allegiance to Isis, fought back, attacking the Nigerian border town of Gamboru-Ngala, killing at least 11 people. Resident Mohammed Umara said Cameroonian forces immediately crossed the border when gunfire erupted and drove out the militants.

Outside Damasak, troops from Chad and Niger found a mass grave which, according to a military source, “appears to contain the bodies of Boko Haram’s victims”.

The offensive by Chad, Niger, Cameroon and Nigeria comes as the latter prepares for its elections, delayed six weeks by security fears, on 28 March. President Goodluck Jonathan has been criticised for not doing enough to tackle the insurgency, but yesterday, he said all territories would be retaken “within a month”.  He added that the fate of the 219 schoolgirls abducted from Chibok was still unknown, but he believed they  were “alive”.

Analysts, though, question how long regional armies can sustain the tempo of the current offensive, without financial and logistical support from the West. The African nations want the UN to set up a trust fund to finance the operations.

And even if Boko Haram is driven from urban areas, analysts warn that it will remain a potent guerrilla force.