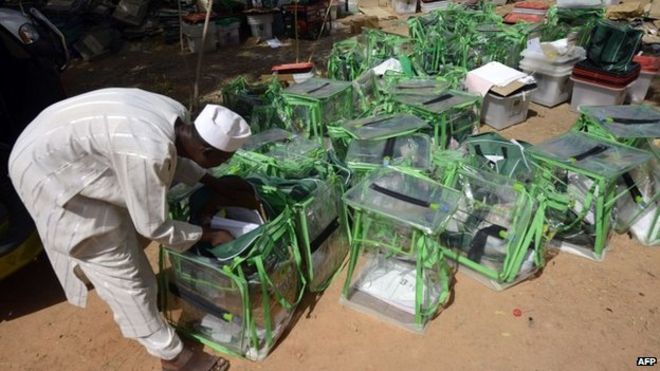 The UN has praised the poll despite technical hitches, protests and violence linked to Boko Haram.

Voting spilled into a second day in some parts of Nigeria after problems with new electronic card readers.

President Jonathan was among those whose registration to vote was delayed by the technology, which was introduced to prevent fraud.

His Peoples Democratic Party (PDP), which had opposed the card readers, called it a “huge national embarrassment”.

Election commission chief Attahiru Jega said only a fraction of the 150,000 card readers being used nationwide had failed.

The presidential and parliamentary elections had been delayed by six weeks because of the insurgency by Boko Haram militants.

Nigeria at a glance:

The Islamists attacked polling stations in north-eastern states, with a curfew declared in Bauchi State after fighting between the security forces and the group.

The UN Secretary General Ban Ki-moon praised the “determination and resilience” of Nigerian voters, despite the reports of attacks by Boko Haram and others.

He said in a statement voting had been “largely peaceful and orderly”.

His comments have been echoed by the regional bloc Ecowas, which urged Nigerians to accept the result.

But there has been tension in the southern Rivers State, where thousands protested against alleged killings of opposition workers and voting irregularities.

Inec said it was “concerned” by the complaints, adding that one of their offices was set on fire during the unrest.

Results of the voting were expected to arrive overnight but so far there is no official indication of which party is in the lead.

The PDP has dominated Nigerian politics since 1999, but Gen Buhari’s All Progressives Congress is viewed as a serious challenge.

Voters are also electing members of the house of representatives and the senate.