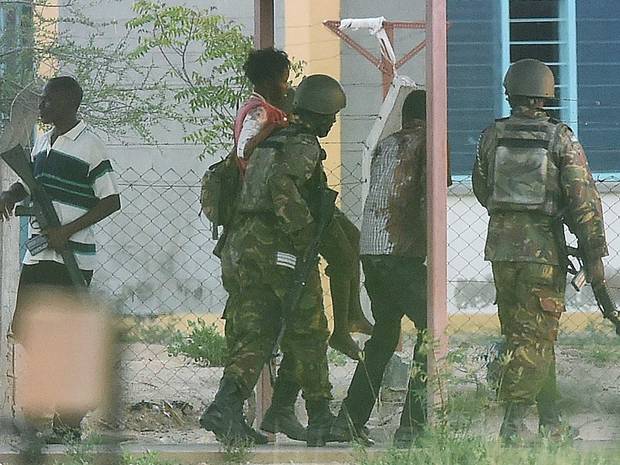 Kenya’s government has identified one of the al-Shabaab gunmen they believe is responsible for killing nearly 150 people in a brutal attack at a university on Thursday as the son of a Kenyan government official.

Kenya’s interior ministry spokesman Mwenda Njoka said the gunman, named as Abdirahim Abdullahi, had been known to police as his father had reported his disappearance to security officials.

Abdullahi’s father, a chief in Mandera County, fearing his son had travelled to Somalia, had already been helping police to trace his whereabouts by the time the brutal attack on the university occurred.

“The father had reported to security agents that his son had disappeared from home… and was helping the police try to trace his son by the time Garissa terror attack happened,” Njoka told Reuters news agency.

Abdullahi has been identified as one of the masked gunmen who stormed the Garissa campus. A Garissa-based official who did not wish to be named said the gunman was a former University of Nairobi law student, and that he had joined al-Shabaab after graduating in 2013: “He was a very brilliant student. But then he got these crazy ideas.”

Mr Njoka said it was not clear where Abdullahi worked before he disappeared last year.

To prevent an escalation of Islamic radicalisation in Kenya it is important that parents inform authorities if their children go missing or show tendencies of following violent extremism, Mr Njoka said.

The massacre carried out on Thursday that claimed the lives of 148 people has been called the worst terror attack in Kenya in 15 years.

Five people have been detained by police on suspicion of being involved in the brutal attack and authorities are offering a $220,000 reward for information leading to the arrest of Dulyadin Gamadhere, a former teacher at a Kenyan Islamic school and who is believed to have orchestrated last week’s attack.

Three days of national mourning for the victims began today, but  Al-Shabaab has already issued a warning to Kenyans, claiming its brutal campaign of violence will see their cities “run red with blood”.

“No amount of precaution of safety measures will be able to guarantee your safety, thwart another attack or prevent another bloodbath,” the group said the statement.

“Kenyan cities will run red with blood … This will be a long, gruesome war of which you, the Kenyan public, are its first casualties,” it added.