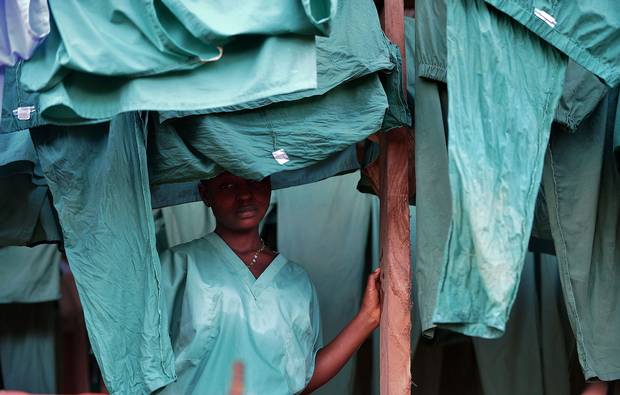 A ‘mysterious’ disease has killed eighteen people during just a few days in a small town in Nigeria.

The outbreak started in Ode-Irele in the south eastern part of the country, and has since spread rapidly in the Ondo state.

The disease kills victims within 24 hours of showing symptoms, which are reportedly blurred vision, weight loss, headache and loss of consciousness.

So far laboratory tests have ruled out Ebola or any other virus or bacterial infection, and according to the World Health Organisation’s Gregory Härtl, the “current hypothesis is herbicides.

The mystery disease reportedly started in Ode-Irele in Ondo State (highlighted red) and has spread to just under two-dozen people so far, with 18 deaths recorded by local health officials.

The symptoms were brought to light by Ebola Alert, an information nonprofit, and confirmed by the Ondo state health commissioner Dr. Dayo Adeanju.

According to Dr. Adeanju, currently there have been a recorded 17 deaths out of the twenty people who have been affected by the disease.

Adeyanju said he had gone on a “field visit” with various health organisations, including WHO, and the Nigerian Centre for Disease control.

He also said that there wasn’t any need for a quarantine, because the cases are “not contagious” and that they were “working from the scientific viewpoint”.

He told the Nigerian Premium Times that the disease, which is unidentified, seems to be attacking the central nervous system, describing the mystery as “a case search to unravel the cause (of the disease)”.

The Ondo state government has set up emergency task teams to try and control the situation and stop it getting out of control.

Government officials have confirmed the health teams had been deployed to take samples of blood, urine and cerebro-spinal fluid from the victims.

These samples have been send to a laboratory in Lagos for analysis and identification.

Those who have been affected have been quarantined at the General Hospital in Irele, with other patients moved out of the facility.