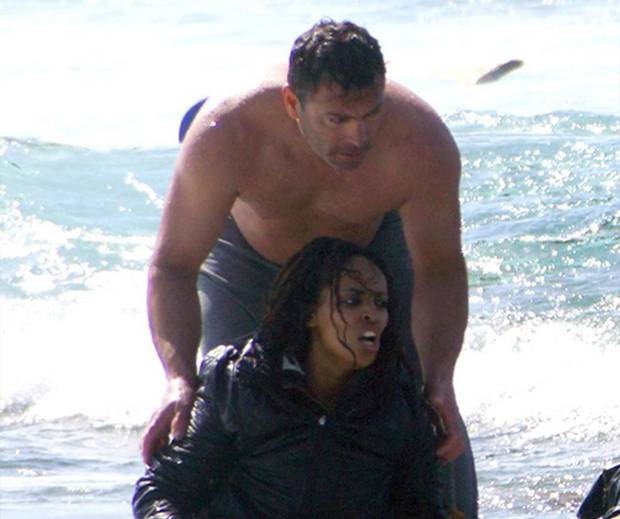 It was the image that defined a week of tragedy – and showed the world how Europe had failed to deal with its migrant problem.

A burly Greek man, bent double, pulling a migrant to safety as three others who had tried to make the crossing from North Africa to Greece on board the same rickety boat perished, turning the Mediterranean into a graveyard.

In all, hundreds of people died during a series of incidents as the world turned its gaze on Europe – and how nations and politicians had singularly failed to address the travesty of the refugees risking their lives in a bid to reach Europe.

And now the Greek soldier who singlehandedly saved 20 migrants who were washed up on the coast of Rhodes after the boat they were travelling in hit rocks has revealed the moment he leapt to save a woman.

The number of migrants attempting to cross the Mediterranean has risen dramatically this year (Getty) One of those whom Antonis Deligiorgis saved was a 24-year-old Eritrean refugee, Wegasi Nebiat.

The woman’s parents had paid $10,000 for her passage to Europe, which began in the Eritrean capital, Asmara. She managed to travel to Khartoum, before flying to Istanbul on a fake passport and then took a boat from the Turkish city of Marmaris bound for Greece.

Her journey could have ended tragically when her vessel, packed with Syrians and Eritrean migrants, began to sink off the Zefyros  beach on Thursday. But fortunately for Ms Nebiat, Mr Deligiorgis, 34, was in a café and saw the boat as it began to list.

“The boat disintegrated in a matter of minutes. It was as if it was made of paper,” he told the Observer.

“Without really giving it a second’s thought, I did what I had to do… I had taken off my shirt and was in the water.”

Within minutes of the boats crashing into rocks off the beach, coast guards officers, army recruits, fisherman and volunteers scrambled to help the refugees, many of whom clung to pieces of the wreckage.

Italian police officers look on as shipwrecked migrants line up to receive first aid from Italian Red Cross personnel as they arrive in the Italian port of Augusta in Sicily on April 16 “Everyone who saw what was happening just jumped in the water, without thinking of their own safety,” Stathis Samaras, a coast guard officer, said.

But of the 93 migrants who were aboard the boat, the Greek father-of-two, saved 20 of them himself.

“The water was full of oil from the boat and was very bitter and the rocks were slippery and very sharp. I cut myself quite badly on my hands and feet, but all I could think of was saving those poor people,” he explained.

Following her miraculous rescue, Ms Wegasi was taken to hospital with pneumonia and exhaustion.

She has since left hospital and travelled by ferry to Piraeus near Athens where she met with fellow Eritrean refugees.

“I am so happy. We are not sure what we will do but we hope to travel across Europe,” she told the Daily Mail.

Hundreds of migrants have died attempting to make the Mediterranean crossing (Getty) “I don’t remember much. I was in the water and scared and then I was here. I feel lucky. I have family back at home and I am lucky that I made it,” she added.

While the majority of migrants from Africa and the Middle East come from Libya and land on Italian shores, the number of people arriving in Greece has almost doubled this year to more than 10,000. Over 1,000 migrants have arrived in the last week alone.

SO far this year, more than 1,650 people will have died in the Mediterranean trying to reach Europe.