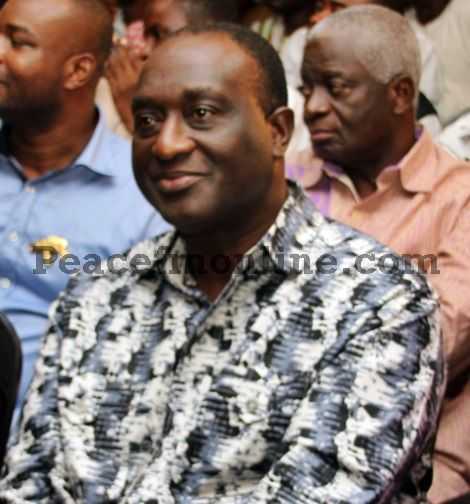 The re-appoinmement of the current Minister for Trade and Industry, Mr Alan John Kyerementen by President Nana Addo Dankwa Akufo-Addo to the same portfolio for the second term has greeted with a massive congratulatory messages from many Ghanaians who are leaving in the country and abroad.

Scores of Ghanaians from the different political parties had gone to the social platforms, particularly the Facebook and Instagram to thank President Dankwa Akufo-Addo for his decision to re-appoint Mr Kyerementen as the minister-designate for Trade and Industry Ministry, describing Mr Kyerementen as a unifier, peacemaker and good listener.

They indicated that their congratulatory messages attested to the real fact that they have a total confidence in Mr Kyerementen and that he has what it takes to lead the ruling NPP when the next and final term of President Akufo-Addo ends.

According to them, re-appointment of the former Ambassador to the US, UN Policy Advisor, a lawyer and a Senior Corporate Executive was a clear indication that Mr Kyerementen has worked extremely hard to serve Ghanaians to the expectation of President Akufo-Addo and the leadership of the governing NPP.

They stressed that he never undermined the work of the NPP and congratulated the President for maintaining him as the Minister of Trade and Industry.

They maintained that Mr Kyerementeng was instrumental in helping the incumbent President in winning the presidential seat in the just ended general election on December 7, 2020.

And this excellence performance demonstrated by Mr Kyerementen, they pointed out has affirmed the statement by majority of Ghanaians, particularly the men of God that Mr Kyerementen should be given the chance to become the next presidential candidate of the NPP after the two terms of Mr Akufo-Addo has expired.

The citizen of Ashanti Region who has an extensive and distinguished record in international trade and public policy, enterprise development, politics and diplomacy was among the list of ministers-designate that Mr Akufo-Addo presented to Parliament on Thursday, January 21.

In a well designed poster, Mr Adomako congratulated Mr Kyerementen for his reappointment by President Akufo as minister-designate for Trade and Industry.

In all, Mr Akufo-Addo submitted names of 27 persons to be vetted and, subsequently, considered for approval as ministers of state.

Among the 27 are former Deputy Ministers in his first term.

These include Godfred Dame, who is now the Attorney General and Minister of Justice-designate, and Dr Yaw Osei Adutwum, who has been nominated Minister of Education.

His former boss, Dr Matthew Opoku Prempeh has also been appointed as the Minister-designate for Energy.

Alan Kyerematen is the current Minister of Trade and Industry of Ghana, having served in the same capacity between 2003 and 2007.

He has an extensive and distinguished record in international trade and public policy, enterprise development, politics and diplomacy.

He is a former Ambassador to the US, UN Policy Advisor, a Lawyer and a Senior Corporate Executive.

As Ghana’s Minister of Trade, Industry and Presidential Special Initiatives from 2003 to 2007, he led the design, development and implementation of innovative programmes and special interventions which have become new strategic pillars of growth for the Ghanaian economy. He also played a key role in shaping Africa’s Trade Policy agenda in the WTO, the EU-ACP Economic Partnership Negotiations, AGOA and UNCTAD.

Prior to his appointment as Minister, Mr. Kyerematen served as Ambassador of Ghana to the United States of America from 2001 to 2003.

In that role, he negotiated various landmark trade and investment agreements between Ghana and the United States, and initiated the establishment of the Ghana-United States Economic Council, which played a strategic role in deepening trade relations between the two countries.

Over 4,000 African entrepreneurs and small businesses have benefited from these programmes.

In 1990, Alan Kyerematen was responsible for establishing and managing the EMPRETEC Programme in Ghana, a leading business development institution sponsored by the United Nations and Barclays Bank Limited.

He led the transformation of EMPRETEC from a UN project into an independent Foundation, which is recognized as a world-class institution and best practice model for entrepreneurship development in Africa.

Between 1984 and 1990, he managed a number of major private and public sector consulting assignments in Ghana, as a Principal Consultant and Head of Public Systems Management with the Management Development and Productivity Institute (MDPI), a leading management development institution in Ghana.

Prior to this, he was a senior corporate executive with UAC Ghana Ltd, a subsidiary of Unilever International, where he worked in various managerial positions with distinction between 1977-1984.

As Coordinator of the African Trade Policy Centre of the United Nations Economic Commission for Africa in Addis Ababa, from July 2011-December 2013, Alan Kyerematen led efforts in building capacity in various African countries in trade policy formulation and trade negotiations.

In addition, he was a leading member of the technical team of the African Union that developed the Action Plan for the establishment of a Continental Free Trade Area for Africa, to be launched in 2017.

Alan Kyerematen is a graduate in Economics from the University of Ghana, and is also a qualified Barrister-at-Law from the Ghana Law School.

In addition, he was a Hubert Humphrey Fellow at the School of Public Affairs and the School of Management of the University of Minnesota, under the US Fulbright Fellowship Programme.

He was a Member of the Council of Governors of the British Executive Service Overseas (BESO) in the United Kingdom, and has also served as a Board member of several other organizations in Ghana.

In 1994, Mr. Kyerematen was listed as one of the top 100 Global Leaders for the New Millennium by the Time International Magazine together with other personalities such as Bill Gates and John F Kennedy Jnr. of the United States of America.

In 2013, he was nominated by the Heads of States of the African Union to contest as Africa’s candidate for the position of Director General of the World Trade Organization (WTO).

Disclaimer: Opinions expressed here are those of the writers and do not reflect those of Peacefmonline.com. Peacefmonline.com accepts no responsibility legal or otherwise for their accuracy of content. Please report any inappropriate content to us, and we will evaluate it as a matter of priority.