Map: In the whole world only these five countries escaped European colonialism

It’s no secret that European colonialism was a vast, and often devastating, project that over several centuries put nearly the entire world under control of one European power or another. But just how vast can be difficult to fully appreciate.

Here, to give you a small sense of European colonialism’s massive scale, is a map showing every country put under partial or total European control during the colonial era, which ran roughly from the 1500s to the 1960s. Only five countries, in orange, were spared: 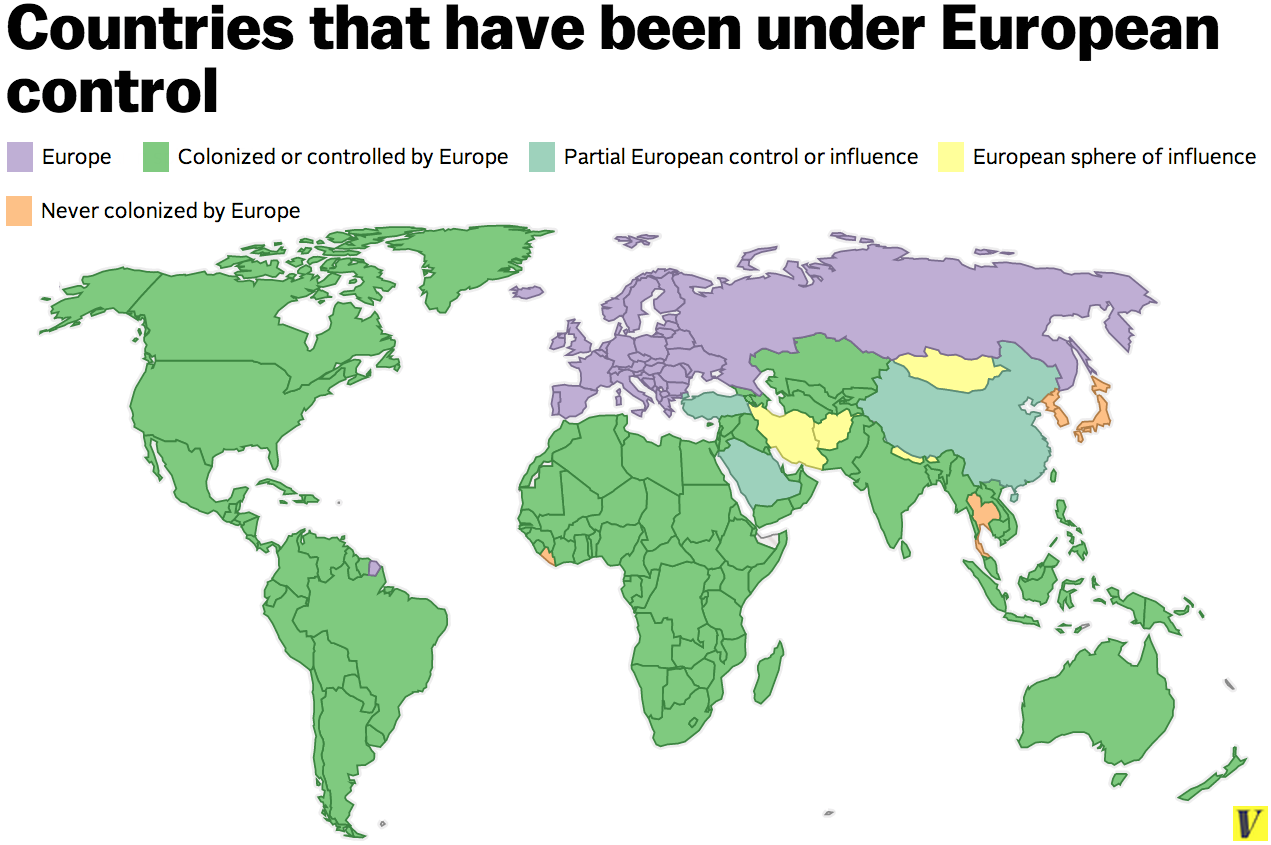 As you can see, just about every corner of the globe was colonized outright or was dominated under various designations like “protectorate” or “mandate,” all of which are indicated in green. This includes the entirety of the Americas (French Guiana is incorrectly labeled as part of Europe due a technical issue, but make no mistake, it was colonized) and all of Africa save for little Liberia. More on Liberia later. The Middle East and Asia were divided up as well.

ALMOST EVERY CORNER OF THE GLOBE CAME UNDER EUROPEAN CONTROL

Some countries instead fell under “spheres of influence,” marked in yellow, in which a European power would declare that country or some part of it subject to their influence, which was a step removed from but in practice not all that distinct from conquering it outright. Iran, for example, was divided between British and Russian sphere of influence, which meant that the European powers owned exclusive rights to Iranian oil and gas in their areas, among other things.

Most of the areas under spheres of influence on this map were politically dominated by the British, who ruled through proxies: Afghanistan (which also endured Russian influence), Bhutan, and Nepal. Mongolia was effectively a proxy state of the Soviet Union for much of the Cold War.

Something similar happened in China, where European powers established parts of coastal cities or trade ports as “concessions,” which they occupied and controlled. Some, such as Shanghai, were divided into multiple European concessions. Others, like British-controlled Hong Kong, were fully absorbed into the European empires. This is why China is labelled as partially dominated by Europe.

Modern-day Saudi Arabia came under partial domination; in the early 1900s, most of the Arabian peninsula transitioned from the Ottoman Empire to the British Empire, though the British left much of the peninsula’s vast interior relatively untouched. Parts of modern-day Turkey itself were divided among World War One’s European victors, though Turkish nationalists successfully expelled them almost immediately in a war for independence that established modern-day Turkey. 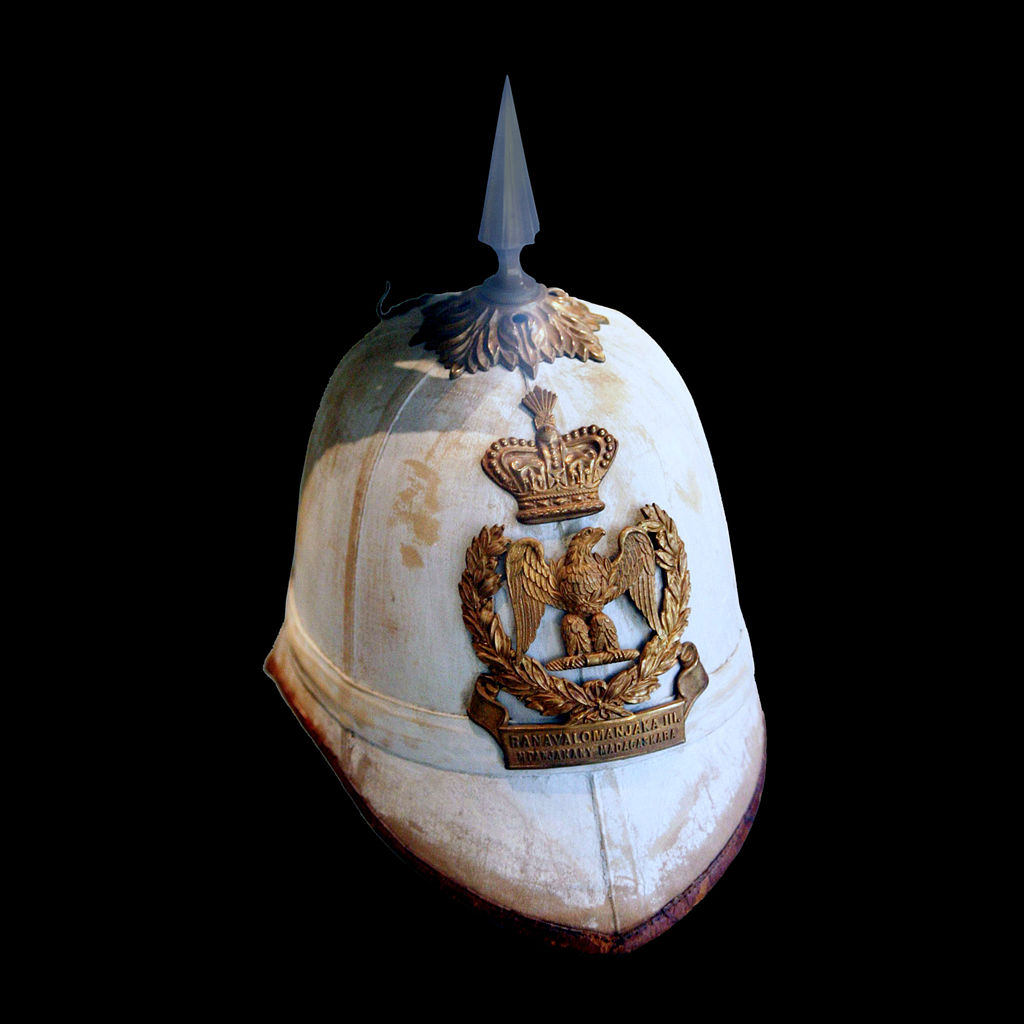 There are only four countries that escaped European colonialism completely. Japan and Korea successfully staved off European domination, in part due to their strength and diplomacy, their isolationist policies, and perhaps their distance. Thailand was spared when the British and French Empires decided to let it remained independent as a buffer between British-controlled Burma and French Indochina. Japan, however, colonized both Korea and Thailand itself during its early-20th-century imperial period.

Then there is Liberia, which European powers spared because the United States backed the Liberian state, which was established in the early 1800s by freed American slaves who had decided to move to Africa. The Liberian project was fraught — the Americans who moved there ruled as a privileged minority, and the US and European powers shipped former slaves there rather than actually account for their enslavement — but it escaped European domination.

The colonial period began its end after World War Two, when the devastated nations of Western Europe could no longer afford to exert such global influence and as global norms shifted against them. The turning point is sometimes considered the 1956 Suez Crisis, in which the US and Soviet Union pressured British and French troops to withdraw after invading Egypt to seize the Suez Canal with Israeli help. But it took a couple of decades for the European colonialism to fully collapse; France was fighting for Algeria until 1962 and Portugal did not abandon its African colonies until 1974. So this map, of a European-dominated world, is not as distant as it may feel for many Americans.