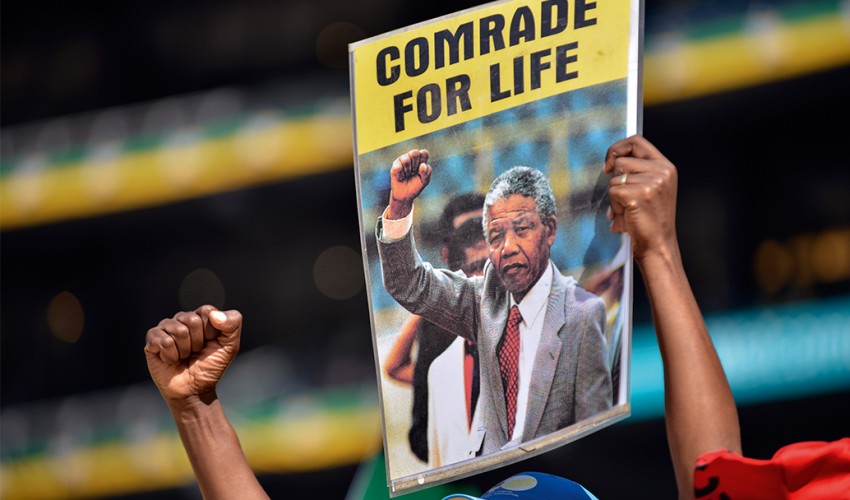 Nelson Mandela died on 5 December 2013. How, a year later, are we to assess Madiba’s achievements and place in history? Will he, like Osiris in ancient Egypt, become a deified ancestor, a new avatar of forgiveness and reconciliation? Or will his place be as the great conqueror of apartheid and father of the “Rainbow Nation”?

In his remarkable “Carthage speech” in Tunis, his first to the Organisation of African Unity (OAU) after becoming president in 1994, Mandela suggests where he, at that incredible turning point, stood in African history.

First, Mandela identifies the tragedy that has befallen Africa over two millennia:

“In the distant days of antiquity, a Roman sentenced this African city to death: ‘Carthage must be destroyed (Carthago delenda est)’. And Carthage was destroyed. Today we wander among its ruins, only our imagination and historical records enable us to experience its magnificence. Only our African being makes it possible for us to hear the piteous cries of the victims of the vengeance of the Roman Empire. And yet we can say this, that all human civilisation rests on foundations such as the ruins of the African city of Carthage. These architectural remains, like the pyramids of Egypt, the sculptures of the ancient kingdoms of Ghana and Mali and Benin, like the temples of Ethiopia, the Zimbabwe ruins and the rock paintings of the Kgalagadi and Namib deserts, all speak of Africa’s contribution to the formation of the condition of civilisation.

“But in the end, Carthage was destroyed. During the long interregnum, the children of Africa were carted away as slaves. Our lands became the property of other nations, our resources a source of enrichment for other peoples and our kings and queens mere servants of foreign powers.

“In the end, we were held out as the outstanding example of the beneficiaries of charity, because we became the permanent victims of famine, of destructive conflicts and of the pestilence of the natural world. On our knees because history, society and nature had defeated us, we could be nothing but beggars. What the Romans had sought with the destruction of Carthage, had been achieved.”

Will Mandela, like Osiris in ancient Egypt, become a deified ancestor, a new avatar of forgiveness and reconciliation?

All of these people played their role in the campaign to reconquer the continent for Africans, with the final drama of this battle played out in South Africa. Mandela then places in context his latest struggle.

“The titanic effort that has brought liberation to South Africa, and ensured the total liberation of Africa, constitutes an act of redemption for the black people of the world.”

The speech then ends with a rousing call for an African rebirth.

The Carthage speech is considered by many to be Mandela’s most important. He provides an overarching African and global historical analysis of South Africa’s struggle. Though he concentrates on 20th-century peers and the fight against imperialism, the bookending of Carthage is noteworthy. Carthage’s defeat in 146 BCE, at the hands of the Roman General Scipio Aemilianus in the third Punic war, led not only to the total destruction of the city, but to its entire population being sold into slavery.

But had Mandela had the time he might have gone even further back, before the Romans, to the beginning of Europe’s more than 2000-year assault on Africa. Alexander’s conquest of Egypt in 332 BCE began the process of extinguishing Egyptian independence and its unique political and religious system. With Pharaonic Egypt, the greatest African power, prostrate, the northern part of the continent became ripe for the taking.

Alexander’s conquest should be understood within the emerging discourse of Western rationalism. His tutor, the famous philosopher Aristotle, provides us with insight into how this new spirit viewed war in his book Politics.

“The art of war is a natural art of acquisition, for the art of acquisition includes hunting, an art which we ought to practice against wild beasts, and against men who, though intended by nature to be governed, will not submit; for war of such a kind is naturally just.”

Since Alexander’s assault, a significant part of Africa’s history has been about fighting off European “just war” attempts to dominate and induce submission. The Greeks gave way to the Romans, who turned North Africa into their breadbasket. The fight back against the Roman Empire produced significant historic figures, such as Hannibal, and later, in another corner of the empire, the battle against occupation would give the world Jesus, and the philosophy of turn the other cheek.

The Roman Empire couldn’t last forever, eventually fragmenting into multiple European states. The Muslim Arabs, whose expansion spread to Spain, in turn conquered North Africa. They were first pushed back from Spain in 1492, and then replaced in the modern period in northern Africa by the Ottoman Empire.

It is perhaps in this modern period after 1492, and the European discovery and naming of the Americas, that Mandela’s importance more accurately belongs. Though in his Carthage speech he mentions some of the great personalities of the last century, he bears better comparison with an earlier giant of African history and is better bookended with this figure, Toussaint L’Ouverture. The contrast with Toussaint, and the differences and lessons learned are an important key to understanding Mandela.

The first group of Africans to seriously shake off the system of racism were in Haiti, led by Touissant. Their battle took place during a time of global upheaval. The Americans had recently launched their Revolutionary War against the British in 1775, and the French had launched their revolution in 1789.

That Haitian generation seized the opportunity to destroy slavery driven by the will to be free and using Jacobin revolutionary ideas. Beginning their uprising in 1791, the Haitian revolutionaries would at different times fight and win against the most powerful armies in the world – the French, the British and the Spanish.

Mandela and the great generation that ended apartheid, and the arguments amongst them about values, tactics and strategy, recall this great generation from an earlier period on the Caribbean island, and Santo Domingo, which had secured the first victory against slavery, constitutional racism and white dictatorship.

There were other arguments about whether a deal could be done with the white authorities that would leave the Africans with freedom and a measure of independence under French tutelage, or whether a Black Nationalist alternative was better. There were also huge disputations over this position with the mixed-race population, who sometimes saw themselves as distinct.

Toussaint’s faction had “progressive” supporters in France, who, once the Haitian uprising began, passed a law in the National Convention in 1794 abolishing slavery in line with the principles of the revolution. But the French revolutionary experiment collapsed, and Napoleon Bonaparte emerged to end it. After “order” had been restored in France, slavery was restored in the colonies.

Toussaint and his generals went back to war. In 1801, he proclaimed a constitution, giving the island autonomy, calling for a sovereign state, and making himself governor for life. He nevertheless continued to seek talks with Napoleon, who had need for an agreement on his terms, of course, as he was under pressure to sell Louisiana at rock bottom prices to the new American state, to make up for his military losses in Haiti and finance his campaigns in Europe. In May 1802, ahead of one of the arranged talks with Napoleon’s representative on the island, Toussaint was kidnapped and like many subsequent African liberation leaders, imprisoned. He would die a few months later in captivity.

The Africans in Haiti reacted angrily to these betrayals, deciding that compromise was no longer possible. Toussaint’s replacement, the hard-line Jean-Jacques Dessalines, massacred many of the treacherous whites on the island on the way to establishing an independent and free-state Haiti in 1804. Dessalines was pitiless on this issue, and his secretary Boisrond-Tonnerre captured his thoughts when he stated:

“For our declaration of independence, we should have the skin of a white man for parchment, his skull for an inkwell, his blood for ink, and bayonet for a pen.”

As defeat would have been, the consequences of this Haitian victory were catastrophic. Dessalines and his successors spent heavily on building fortifications against invasion, keeping society militarised. Although no power would invade Haiti, it was however blockaded, sanctioned, and surrounded by hostile powers, terrified of the “Haiti example” to their slave-holding concerns. This fear helped free others as it was a contributing factor to the British abolition of the African slave trade in 1807.

Meanwhile, Dessalines was unable to restructure the plantation economy and effectively drove many of the newly free Africans back to forced labour. The tensions produced led to his assassination, and over the next years to further political and economic instability. Skin colour would also prove problematic, with divisions between the mixed population and the rest. To end the isolation and sanctions, Haiti would eventually be forced into a humiliating agreement with the French in 1825 to pay reparations for its slaves’ freedom. In today’s terms it would amount to between $17-$25 billion. And French ships and goods entering and leaving Haiti received a 50 per cent tariff discount. By 1915, Haiti was effectively bankrupt, and the US invaded and occupied the country until President Franklin D. Roosevelt withdrew US marines and transferred power back to a Haitian authority in 1934.

Haiti paid a huge price for the manner in which it succeeded in opening the account for African liberation in the modern era. Just under two hundred years later, Mandela, and his generation, closing the chapter of constitutional racism and white dictatorship, would forgive the whites their atrocities.

The contrast with Toussaint and his generation is fruitful. There are, of course, huge differences – the Haitians won a military victory but faced a hostile world. Mandela and his comrades did not win outright and had to negotiate but were also able to benefit from a more benign international climate, with powerful supporters in Africa, the Western public and the state socialist world. They called for sanctions and used it as a powerful weapon. Also, the whites had learnt some lessons, not allowing Mandela, like Toussaint, to die in prison.

There is no doubt that the generation in Haiti were giants, given the means at their disposal, and the forces they faced. They won an important victory – but when we look at the state of Haiti, probably lost the war.

Mandela and his generation learned some important lessons from the mistakes made by the Haitian generation and the subsequent freedom fighters who won liberation. One question is, in removing white supremacy, how do you turn your conquerors into equal citizens? Another is, how do you replace the system of white supremacy with a system that ensures the economic inclusion of everyone? How do you create a productive economy after the many structural disfigurements of slavery or forced labour, without reproducing those patterns of exploitation?

Neither the generation of Toussaint/Dessalines or Mandela have found the answer to this final question. The challenge, of course, continues, as Mandela understood at the ending of his Carthage speech:

“We are certain that we will prevail over the currents that originate from the past, and ensure that the interregnum of humiliation symbolised by, among others, the destruction of Carthage, is indeed consigned to the past, never to return. God Bless Africa.”