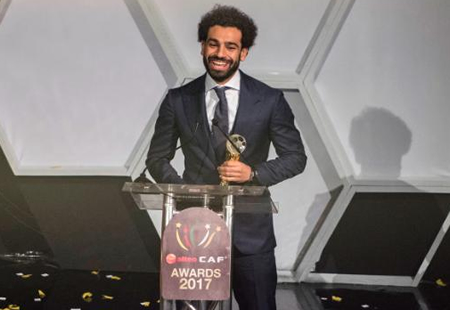 Liverpool star Mohammed Salah has been crowned the 2017 Confederation of African Football (CAF) footballer of the year at the Aiteo CAF Awards, held at the Accra International Conference Center on Thursday.

The Egyptian shrugged off competition from the 2016 winner Pierre- Emerick Aubameyang who plays for German side Borrusia Dortmund and Liverpool teammate Sadio Mane for the flagship award of the night.

The 25 year old played a pivotal role in aiding Egypt to book a ticket to the 2018 World Cup in Russia after 28 years of absence and finished runners up at the last Africa Cup of Nations.

At his old club side AS Roma, he scored 15 goals to finish second behind Serie A behind Juventus before joining Liverpool, where he’s currently the leading goal scorer in the league.

After 26 appearances for Liverpool in all competitions, Salah has scored 23 goals and registered eight assists.

In his speech, he described the season as a good one for him adding that, he would continue to work extra hard to win more of the awards.

“This award is very important to my career and it won’t end here.

I’ll continue to work extra hard to win more of it”. He stated.

In other award categories, Hector Cuper who guided Egypt to qualify for the 2018 World Cup was named the coach of the year whilst Nigerian Asisat  Oshoala emerged as the female player of the year.

President of Ghana Nana Akuffo Addo and President elect in Liberia George Oppong Weah were presented with the Platinum awards and Ibrahim Sunday was awarded with the legendary award.