How would fashions have evolved without slavery and the colonisation of Africa?

Over the past few years, I have made a habit of asking my fellow Africans from different countries what they think would have been the lot of our continent if the slave traders and colonisers had never set foot here.

Some suggest that African societies would have eventually evolved, gradually catching up with the rest of the world in terms of development.

Others insist that Africa was already at the same level of development as the rest of the world, but that slavery and colonialism interrupted and stunted our growth.

Some others believe that we Africans would have wiped ourselves out with tribal wars and conquests and that the continent would have become a vast space with the few surviving ethnic groups spread out far from one another. 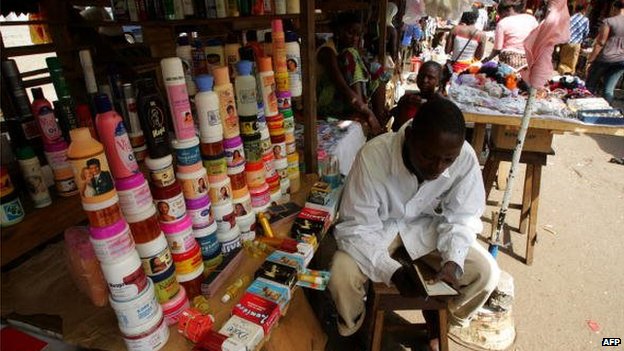 Beauty products such as skin lightening creams are popular across Africa

I like to imagine that we Africans would have eventually, in the fullness of time, sorted ourselves out.

We would have discovered electricity and gravity; we would have invented air conditioners and refrigerators and we would have wondered what lay across the vast oceans, then sent men and women in ships to find out.

I also imagine that, at some point, an African would have thought, “My hair is tightly curled and beautiful. But I wonder what it might look like when straightened.

“What if my hair were blue instead of black? What if yellow or red? What if gold?”

Such an African could then have gone on to invent hair relaxers and dye, despite never having seen a Caucasian with straight, blond hair.

It would have been less about “trying to look like white people” and more about creativity, a quest for options.

Africans may also have contemplated the possibility of switching skin colour.

“Some of us are dark-skinned and beautiful; some are light-skinned and equally beautiful. What if the dark can become light and vice versa?”

The first set of “bleaching creams” manufactured may have been carcinogenic. But eventually, an African scientist, unhindered by any guilty feelings around helping “black women make themselves look like white people”, would have perfected a bleaching cream that was not dangerous.

He may even have received a much-needed government grant to further his research.

African women would then have been free to alter the colour of their skin without any adverse health effects.

‘Glow in the dark’

Many of the Nigerian women I know who use skin-lightening products are not necessarily originally dark-skinned.

They are already light-skinned women who want to reinforce what they already have. 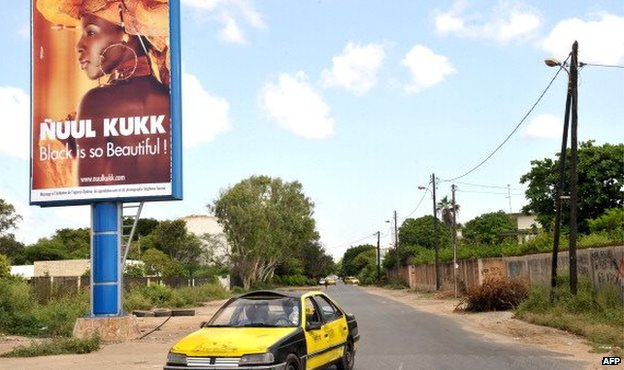 A few years ago, campaigners in Senegal put up posters against skin lightening creams

Think of a butcher sharpening his knife or a Naomi Campbell wearing high heels.

Some of these women bleach their skin only a few weeks before a big event, such as a society wedding.

They know that there will be a crowd of guests and they intend to stand out.

Therefore they purchase the most eye-catching jewellery and clothing, and don the most elaborate pompadours.

Being light-skinned is a natural stand-out factor in a society where the majority of people have dark skin.

By bleaching their skin, these women also aim to “glow in the dark”.

‘Ashamed of being black’

Nigeria’s infamous 419 scammers of the 1990s had a reputation for flashy lifestyles.

They drove the biggest cars, wore the most flamboyant clothing, and built the most ostentatious houses.

Many of them also tended to prefer being seen in the company of light-skinned girlfriends and wives, women whose complexions “flashed”.

Females eager to benefit from the scammers’ largesse began bleaching their skin.

Almost every year, a fresh debate erupts in the media around bleached skin and other alterations to appearance that African women embark upon.

I suspect that this year will not be different. This topic will once again make the rounds.

One of my New Year wishes is that accusations of “wanting to be like white people” or “being ashamed of being black” will not drown out whatever else Africans around the world have to say regarding the various choices they make.

What if there were no-one else in the world but Africa and Africans?

It is within that premise that I would prefer to see the debates tackled.