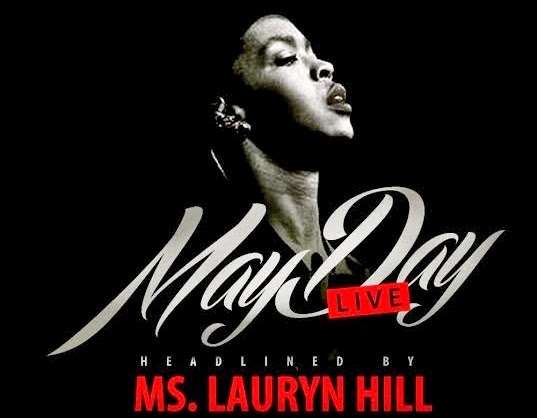 Fugees star, Lauryn Hill could not perform at the 2015 May Day Live concert scheduled to hold today, Friday, May 1, 2015 at the Eko Hotel and Suites.

According to a report by popular blogger, Linda Ikeji, Hill did not make her flight to Lagos from her American base for the music concert.

Though the concert was scheduled to be headlined by the popular singer, who ran into troubled waters over tax matters few years back, it is been reported that the organisers are determined to ensure the show goes on without the singer, who is married to Ziggy Marley.

The reports further hinted that fans of the singer with tickets for the event are expected to be compensated by the organizers, who are making frantic efforts to ensure the concert does not flop.

May Day Live concert with Lauryn Hill is a brainchild of X-MEDIA NIGERIA, which according to the CEO, Chuma X Ajufor, it is aimed at celebrating workers’ day in Nigeria with a rich blend of entertainment. 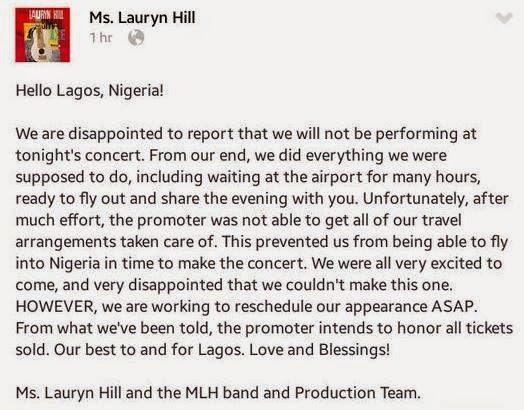 Due to Ms Lauryn Hill’s flight issues, the organizers of May Day Live and Ms Lauryn Hill management have concluded to postpone the show. A new date will be communicated soon. All Tickets bought will be used for the new concert date. Meanwhile a party will still hold today at Eko Hotel starting from 7pm, feel free to come and party as no tickets are required.

The organizers of May Day Live apologize for any inconvenience.