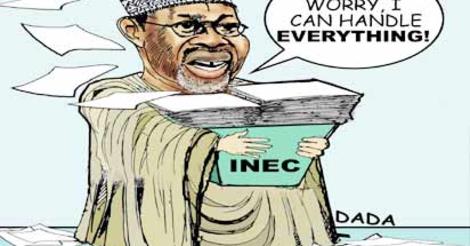 Abuja – Ahead of the 2015 polls, INEC says its decision to print some ballot papers abroad is to protect the integrity of the electoral process.

The Chief Press Secretary to INEC Chairman, Mr Kayode Idowu, made this known in an interview on Wednesday in Abuja.

Idowu also denied the allegation that the commission spent 75 million dollars to print the 2015 presidential ballot papers in Europe, saying “I am not aware of that.’’

He, however, said it was true that some of the ballot papers for the 2015 polls were being printed locally while others were being done outside the country.

“This is a country where some elections are extremely contentious.

“ Some elections are so contentious that however it goes, people will complain from partisan perspective and the commission is mindful of that.

“ I can assure you that a large portion of the materials we are using, both sensitive and non-sensitive, are also being printed locally and some part of it are being printed abroad.

“They are printed abroad in the interest of the country, for the integrity of the election and the acceptability of the procedure.
“ All these have been taken into consideration,’’ he said.

Idowu also said that INEC took into consideration the economic situation of the country, security and capacity in taking decisions on the printing of the ballot papers.

“When you talk about capacity, which printer will deliver that required number within a window at which this must be done?

“It is not that we have all the time in the world. We only begin to print when nomination by political parties is concluded. That is the time frame that the law allows for.

“ In that short time window, there is no printer in Nigeria that can deliver on that and that is why it has to be spread,’’ Idowu said.

He said printing some of the ballot papers abroad was also important to prevent arguments over bias in the printing process.

“ If you print here, you will not get a better cost because the people that are doing the printing abroad already have the experience, infrastructure and technology in place,’’ he said. (NAN)