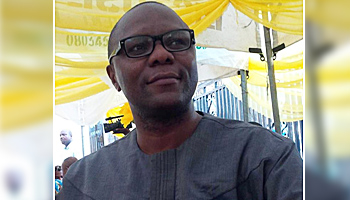 My name is Ike Ilegbune. I’m in my early 40’s and have spent over half my life living outside Nigeria. I am married, and have two lovely kids.

Q. Please take us through your background and how you got to (the country you lived in before coming back home)

A. I lived in the UK as an adult for almost 20 years. The Nigerian economy struggled to match the expectations of many of its graduating youth in the early 90’s. I had options and so I considered them. One involved returning to the UK to do some post graduate study, and potential opportunities for employment both during and after the programme. I jumped at it.

Q. So, the big question, why did you move Back to Nigeria for good?

A. There were no specific compelling factors other than a desire to move back at some point. I’ve never really looked back on the rationale for that decision or evaluated it deeply, and it was driven perhaps more by an emotional pull than anything else. It was simply a question of timing then. I had set and achieved many life milestones, and having successfully lived in the UK for close on two decades, I decided the time was right.

Q. Are there similarities between the country you moved back from and Nigeria?

A. Of course there are, and one would expect that, even in a developing country. Indeed I’d say Lagos, my current city, shares a lot of its core characteristics with London. This is not to suggest that Lagos is anywhere near as developed. No. However, both Lagos and London being mega-cities, share common characteristics in terms of the concentration of talent and creative ideas, dynamic business and cultural life and a choice of employment and leisure lifestyles.

On the adverse side, they both suffer from severe traffic congestion, pollution and pressure on the infrastructure and utilities as a result of the population size. Indeed, in these respects, Lagos has more in common with London than it does with most other regional cities.

From a national perspective, the similarities are less obvious – a shared colonial history and, to a limited extent, language. They are poles apart economically and politically.

A. Tricky question! Your readers don’t have all week! I had set my expectations quite low, and that helped me manage many of the challenges I came across. One though, still leaves a sour taste and I’m not sure if it was always lurking in the background or has emerged anew…an overt tribalism that seemed more latent with the older generation. I have been surprised at how often judgements are unabashedly made about me, or others, simply from the origins of one’s name. It seems as if the ‘Nigerian-ness’ I experienced living in the UK is non-existent here. My other big bug-bear is the chaotic driving habits of my country-folk.

Q. What were your expectations and fears when you decided to move back?

A. As I’d mentioned earlier, my expectations were set quite low. I was also quite open-minded, and had a wide range of opportunities lined up to explore. My biggest fear, I guess, was not being able to make sufficient progress with any of my several lines of action in enough time so as not to exhaust available funds. I told myself very early that returning to the UK was not an option, so one would have to live with any failures right here. That said, I did have the benefit of initially being on a sabbatical from my UK job, which I initially thought would require an extension from 12 to 18 months. As it turned out, an extension was unnecessary.

Q. When did you move back and what have you been up to since you moved back?

A. I moved back in early 2012, first to Abuja and subsequently to Lagos. I started off re-engaging myself in law practice as a partner with a business development role in my parent’s firm. The firm also went through a merger that I managed. With a background in management consulting, my core skills in project and resource management, data and situational analysis, and solutions development were quite adaptable to a range of roles.

I set-up as an independent consultant and, over time, have narrowed my interests to managing international development programmes and corporate governance solutions. I am now a director with Integrity Organisation (GTE) and have an executive board role on the Convention for Business Integrity (CBi).

Q. Coming back to Nigeria, did you ever feel like you needed to readjust to life back in the country?

A. I must admit that I thought I wouldn’t need to. How wrong I was! My ‘regular’ visits to the country once or twice annually, may have been useful to dampen the shock, but living here is a completely different experience from what I recalled from my late teens, early twenties. Everything is different where it matters most – attitudes: to wealth, culture, language, discipline /values. One great development though is the fact that people no longer think it is necessary to emigrate semi-permanently.

Q. How do you deal with issues such as traffic, lack of basic infrastructure and the power situation?

A. Simple answer is money! Too much traffic – get a driver and leave abundantly early for appointments. You can work in the car. No healthcare – well, pay heavy premiums on health insurance (including air evacuation if you can afford it); No power – Set aside a chunk of your wages for diesel or, as I have, move into a gated community/estate that offers 24-hour power supply. Shikena! Sadly, these are the kinds of issues that, by and large, keep many who are settled overseas from returning to live here.

Q. If you had to do this all over again what would you do different?

A. I’ll be honest and say I’m not so sure, other than to return much earlier than I actually did.

Q. Finally, what advice would you give people moving back to Nigeria from the Diaspora?

A. Firstly, I’d say set realistic expectations or none at all…sounds counter-intuitive perhaps, but I realized that the less I was dependent on a situation the easier it was to manage successfully. We Nigerians are wary of desperate people – so push hard, but don’t make it so obvious to others that a lot hinges on it. Next, do long stints during your trial period. Regular (non-work related) breaks back to your originating base will limit your ability to adjust.