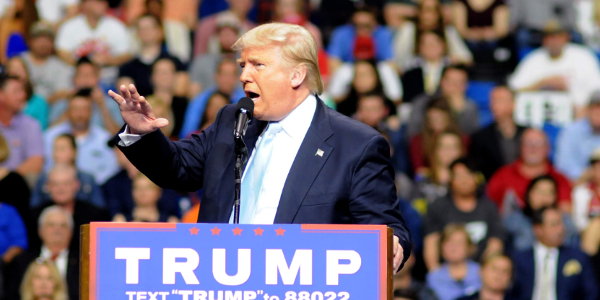 Aly-Khan Satchu is a sub-Saharan Africa economic and geopolitical analyst and the founder of the East African financial portal www.rich.co.ke

I was speaking with Charles Hecker of Control Risks about Control Risk’s RiskMap2017 which flagged the Trump administration as the number one risk in 2017. During that conversation, he congratulated Africa for staying out of Trump’s rat-a-tat Twitter feed and by extension, below his radar.

Popping above Trump’s radar has been expensive. In almost every case, when the president unleashes his Twitter fury, the share price of the affected company drops – in some cases fairly significantly. Nordstrom, however, snapped that trend. As I reflected on Trump’s tweets, I recalled an interview with StanChart PLC’s Bill Winters where he said that the bank was “war-gaming” trade disruptions after Donald Trump’s election. “Clients in our markets are focusing on diversifying trading partners as much as possible to avoid a cliff-edge effect,” if Trump’s administration implements protectionist policies, Winters added.

I thought to myself, I wonder if Africa is “war-gaming” the effect of a Trump administration on the continent and modelling where the “cliff-edge effect[s]” might lie.

Africa has barely featured so far. The first African leader to receive a call from President Trump was Egyptian President Abdel Fattah al-Sisi on 23 January 2017. Then on 13 February, Trump spoke with President Buhari and President Zuma. President Zuma will be glad of that call because he had in fact turned down a request to meet with the presidential candidate Trump in New York. Other than that, the New York Times did report on a series of questions from the Trump transition team to the State Department on 13 January 2017. The tone was noteworthy if not just plain sceptical.

“How does US business compete with other nations in Africa? Are we losing out to the Chinese?”

“Most of AGOA imports are petroleum products, with the benefits going to national oil companies, why do we support that massive benefit to corrupt regimes?” the questionnaire asks.

“With so much corruption in Africa, how much of our funding is stolen? Why should we spend these funds on Africa when we are suffering here in the US?”

“We’ve been fighting al-Shabaab for a decade, why haven’t we won?” poses one question.

“We’ve been hunting Kony for years, is it worth the effort? The LRA has never attacked US interests, why do we care? Is it worth the huge cash outlays? I hear that even the Ugandans are looking to stop searching for him, since they no longer view him as a threat, so why do we?”

“Is PEPFAR worth the massive investment when there are so many security concerns in Africa? Is PEPFAR becoming a massive, international entitlement programme?”

“A strange attitude runs through this,” J. Stephen Morrison, director of the Global Health Policy Center at the Center for Strategic and International Studies said. “There’s a sort of recurrent scepticism that Africa matters to US interests at all. It’s entirely negative in orientation.”

However, let me start with the ”Executive Order Protecting The Nation From Foreign Terrorist Entry Into The United States” dated 6 March 2017. Whilst only flagging two African countries [Somalia and Sudan], the Executive Order speaks to a much more coercive and restrictive immigration policy. It is estimated that a 30 million strong African diaspora remitted nearly $40bn in 2010, equivalent to 2.6% of Africa’s GDP. The $40bn figure is widely viewed to have a major understatement bias because of the volume of money that is remitted informally. The number might be three times larger than the $40bn figure. The World Bank estimates that 28% of the $40bn, which is $11.2bn, or if you prefer the $120bn (28% of which is an eye-popping $33.6bn) originates from the US. Whichever way you care to cut it, its a big and material number. A coercive Trump immigration policy is surely going to taper the absolute remittance figure out of the US into Africa. Africa therefore finds itself at the ”bleeding edge” not unlike Mexico. A big taper in US remittances bound for Africa is a clear and present danger.

Another risk is around AGOA. It is worth noting that AGOA is solely a US law and it could conceivably be changed by a simple act of the American Congress. Combined two-way trade between the US and AGOA-eligible sub-Saharan African (SSA) countries has doubled between 2001 and 2014. Peak trade flows were recorded in 2008, valued at almost $100bn. The global financial crisis subsequently resulted in a significant contraction in SSA’s exports to the US although the period since then has initially seen a gradual recovery in trade flows, before declining again after 2011. In 2014, two-way trade was worth $50bn, and eligible AGOA countries’ trade surplus with the US had declined to a mere $2bn.

SSA exports to the US have consistently exceeded imports resulting in a significant trade surplus in favour of African countries overall; however this surplus has declined and is now very small (2014). SSA’s largest exporter by value has traditionally been Nigeria which accounts for 32% (in 2013) of combined exports to the US based on exports from all AGOA beneficiaries in 2013. Angola and South Africa each account for a further 24% of the combined total (2013). A number of countries on the east coast of Africa have sought to leverage textile exports, for example, into the US – a reversal of AGOA would cause serious damage to those businesses.

President Bush is seen as an hero in Africa. In 2003, in a move that has been described as his greatest legacy, George W. Bush created a programme called PEPFAR – the President’s Emergency Plan for AIDS Relief. At the time, more than 20 million people in sub-Saharan Africa were living with AIDS, but only 50,000 had access to antiretroviral drugs that manage the disease and prevent its spread. Now, thanks to PEPFAR, 11.5 million people are on those drugs. It has been variously described as a “globally transformative lifeline” and “one of the best government programmes in American history”.

Bush initially committed $15bn to PEPFAR over five years, but the programme was renewed in 2008 and 2013 and has since received over $72bn in funding. As well as disseminating treatments, that money has: funded HIV testing and counseling for 74 million people; provided critical care and support to 6 million orphans and vulnerable children; prevented 2 million babies from being born with HIV by offering drugs to mothers; trained 220,000 health workers; supported 11 million voluntary male circumcisions to prevent the spread of HIV; improved health care in the various focus countries; and supported services for controlling other diseases like malaria and tuberculosis. One study showed that within five years, PEPFAR had roughly halved the adult death rates in nine targeted countries, at a time when mortality in other SSA nations barely declined. During that period, African adults were 16% less likely to die if they lived in one of the PEPFAR-targeted nations. It is estimated that the US has delivered $72bn of funding over 13 years which equates to $5.53bn a year. Any reduction in this spend will have immediate negative effects.

US aid to Africa

It is estimated that US aid for all of sub-Saharan Africa clocked approximately $8bn [versus Afghanistan ($5.5bn), Israel ($3.1bn), Iraq ($1.8bn) and Egypt ($1.4bn)]. A big slash and burn of this budget would be seriously problematic.

It was surely in the second term of President Obama that the penny dropped in Washington about the trade and investment opportunity in Africa. The US corporate sector had preceded President Obama. FDI into Africa clocked $57.5bn in 2015. A significant slice of that originates out of the US. In fact, when Kenya issued more than $2bn of Eurobonds, 66% of the issue was bought by US investors.

The US seriously ratcheted its military role higher on the continent over the last 10 years. Nick Turse who writes authoritatively in these matters says:

In 2006, just 1% of commandos sent overseas were deployed in the US Africa Command area of operations. In 2016, 17.26% of all US Special Operations forces – Navy SEALs and Green Berets among them – deployed abroad were sent to Africa, according to data supplied to The Intercept by US Special Operations Command. That total ranks second only to the greater Middle East where the US is waging war against enemies in Afghanistan, Iraq, Syria, and Yemen. As recently as 2014, there were reportedly only about 700 US commandos deployed in Africa on any given day. Today, according to Bolduc, “there are approximately 1,700 [Special Operations forces] and enablers deployed… at any given time. This team is active in 20 nations in support of seven major named operations.” Using data provided by Special Operations Command and open source information, The Intercept found that US special operators were actually deployed in at least 33 African nations, more than 60% of the 54 countries on the continent, in 2016. Early signals [in particular in Yemen] are indicating that the Trump administration is looking at Africa through a ”security-focussed lens” [Eliot Pence]. I expect a significant and parabolic move in this regard. I am sure this insertion of a hard-power lever was in part designed to be a lever with which to tilt the pitch against China’s exponential African arrival. The US and China make interesting neighbours in Djibouti.

Africa is currently growing at a more than 20-year low. These are choppy waters and for now Africans are sifting smoke signals trying to work out what Trump might entail exactly.