How Much Will Nigerian Political Campaigns Cost? 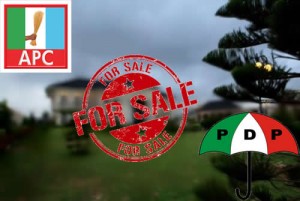 Falling oil prices don’t appear to be affecting campaign financing in Nigeria ahead of the country’s upcoming elections, scheduled for Feb. 14, Deji Badmus reports in this CCTV video.

The leading political parties, the All Progressive Congress and the ruling Peoples Democratic Party have raised huge amounts of money from party members and supporters to fund their campaigns, according to ChannelsTV.

The Peoples Democratic Party (PDP) raised more than 20 billion naira ($105 million USD) in a fundraising event for campaign activities. The presidential candidate of the All Progressive Congress (APC), Gen. Muhammadu Buhari, raised 44 million naira or $231,000 USD from supporters to fund its presidential campaign.

Political leaders could enrich themselves with the money, said Eze Onyekpere, director of the Centre for Social Justice.

Gov. Babatunde Fashola, chairman of Buhari, Osinbajo Fund Raising Committee, said at a press conference that public participation in fundraising will allow ordinary Nigerians to have a say in the governance of the country, according to a report in AllAfrica.

A presidential candidate can spend no more than 1 billion naira — $6 million USD but politicians spend far more, according to CCTV.

There are campaign posters all over Nigeria vying for voters’ attention. They’re not cheap. About 5000 posters cost 150,000 naira — about $1000 USD — and candidates must print millions of them to have an impact, CCTV reports.

Daily campaign rallies are bigger and more expensive than in the past. Lawyer Chima Nnaji said each rally in Nigeria costs at least 1 billion naira to cover the music, food, drinks, logistics and accommodation, just a few of the expenses.

Politicians are spending way beyond the prescribed limits to get the votes, CCTV reports.