HOW BAD CAN IT GET FOR NIGERIA’S PRESIDENT BUHARI? 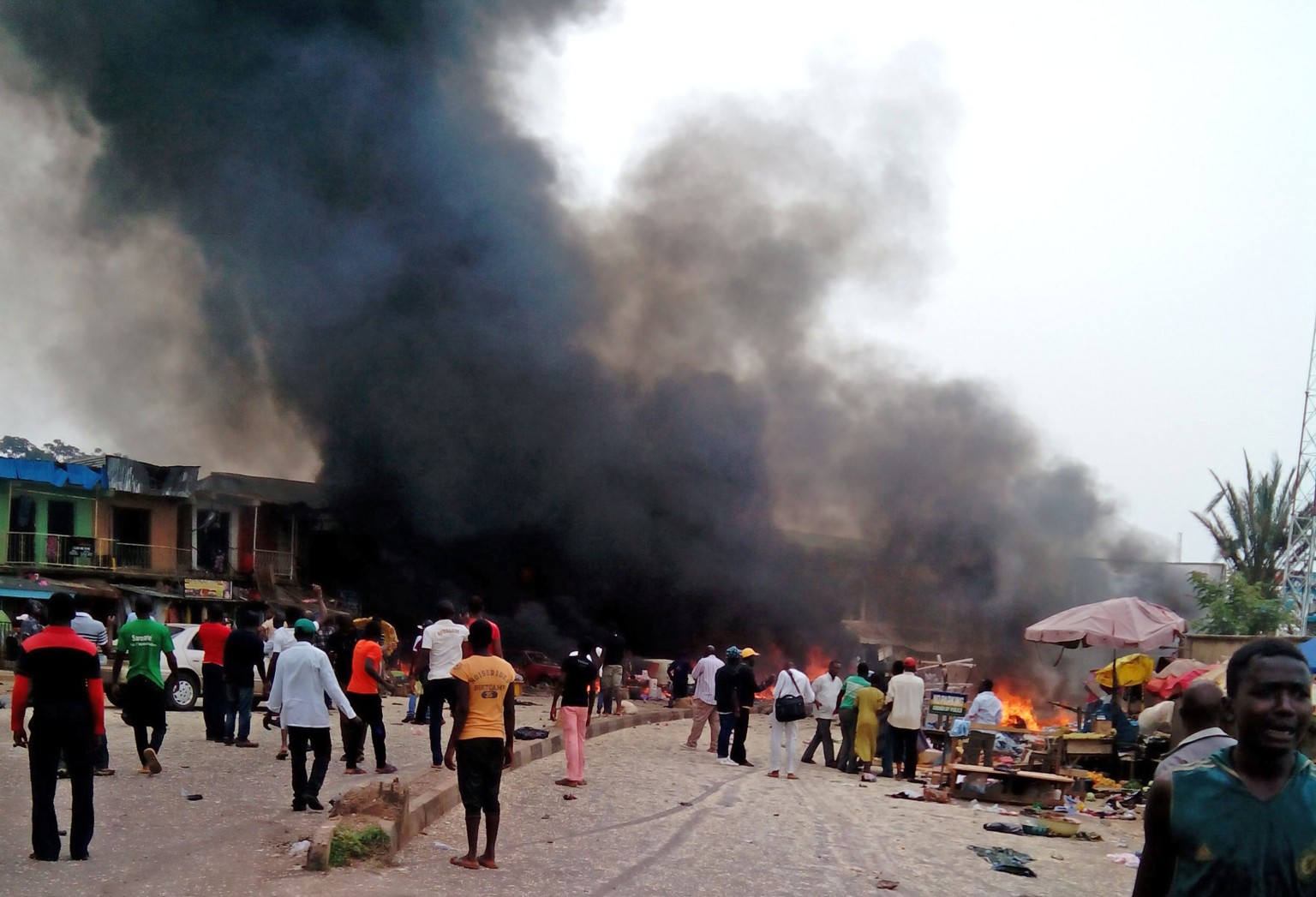 President Muhammadu Buhari is still in his early days at the helm of Nigeria’s affairs, but his honeymoon is long over. Barely a month after triumphantly entering the presidential office with the broom of change, the new president is already struggling to sweep off the barrage of attacks and expressions of discontent over his actions, inactions and pace of his government. His delay in setting up a cabinet and rolling out promised reforms have earned him the nickname ‘Baba Go-Slow‘. He is also being accused of political ineptitude, poor leadership in the rift in his party’s controlled National Assembly, nepotism, for favouring northerners in his first few appointments, and ineffectiveness, for the rapid increase in Boko Haram attacks.

Even seemingly trivial issues have drawn the ire of Nigerians. One of such was the wristwatch worn by President Buhari’s wife to his inauguration and in her official portrait as the first Lady. Several online blogs described the watch as a $52,000 Cartier Baignoire Folle 18-Carat White Gold Diamond Ladies Watch. So serious was the uproar about the watch that even mainstream global media houses like the BBC picked up the story. “Buhari underlined his humble credentials by raising money from ordinary voters. He even had to stretch his finances to pay the fee to register as a candidate. This image was diluted somewhat when his wife, Aisha Buhari, was pictured wearing an expensive-looking watch at her husband’s inauguration last week,” read an article published on BBC trending on June 3. While that furor seemed to die down days later, another has come up, just a month after, over comments alleged to have been made by his daughter, Zahra on Twitter. Yesterday, the Presidency issued a statement that the tweet came from an impersonating account, but even that move has been criticised.

Why should presidency make statement on Zahra buhari’s twitter account, is she an official at the presidency? Pls I need education on this

If d Presidency swift in tacklin Boko Haram, d way they were swift in changing @Zahra_Buhari handle to @ZmBuhari, Nigeria will be alot safer

While many of the current critics of President Buhari have never been his fans, some of the issues being raised are matters of serious concern to the general public. The delay in setting up the federal cabinet is one of such issues. The President has been widely criticised for failing to pick his ministers more than a month after his inauguration. “It’s approximately three months since Nigerians voted for Mr. Buhari, on his fourth try, to be their president. By any objective measure, three months is more than enough time for a man who sought power with a certain persistence to figure out his cabinet,” wrote popular political commentator, Okey Ndibe, in Sahara Reporters, an online platform famous for its harsh criticism of the past President Jonathan’s government. Okey Ndibe was himself very critical of the former president during his tenure often accusing him of being out-of-touch with the challenges of Nigerians.

#BabaGoSlow Nigeria feels like it’s in auto pilot with no government, at this rate 2018 will soon come.

No one and its all because of #Babagoslowhttps://t.co/UFXYlPaROp — Okoli Ikechukwu (@OkoliIkechukwu2) July 5, 2015

It seems by the time @MBuhari finishes studying his transition committee report there will be no more#Nigeria to govern. #BabaGoSlow #APC

No electricity. No fuel. 5 liters for N1,000 Is anyone in charge of anything? Who are the relevant permanent secretaries?

Another issue that has brought much criticism on President Buhari is his inaction in the face of the parliamentary leadership crisis threatening to tear his party apart. The crisis has created huge worries even inside the president’s strong fanbase. Dele Momodu, the owner of popular celebrity magazine and a staunch supporter of Buhari, expressed his discontent with the retired military General’s stand: “There is no doubt that the present imbroglio in your Party is as a result of your lukewarm attitude to Party issues thinking you could merely concentrate on nation-building while others deal with political intrigues. However, it is not always as simple as that. As you can now see, you don’t seem to be on the same page with your Party,” Momodu wrote in an open letter to the President. Another part read, “Sir, let me say right away that the goodwill garnered during your campaigns and the jubilation that heralded your recent victory are fast fading and you need to, as a matter of urgency, convince the people of Nigeria that you’re now ready to hit the ground running. They are not going to listen to excuses since you had 30 years after quitting the high office to onerously prepare for the job again. For them it is immaterial that you met an empty treasury or that you are mostly surrounded by selfish, corruptive influences and impostors.”

If we wanted Patience, we would have voted the Otuoke man!!!!! #BabaGoSlow #BabaPressStatementhttps://t.co/yXPpCtnlRE — Dr Es (@slkie) July 6, 2015

Attacked for his passivity, President Buhari has also taken some flack for some of his actions. National newspaper, Punch, a few days ago reported of an uproar over the President’s appointments favouring the North which he hails from. “Of the nine appointments made by Buhari so far, eight are from the North, while one is from the South,” the paper said. It described the people from the South as “concerned” over the president’s moves, quoting several online commenters and chieftains of Southern ethnic pressure groups. “We expect the President to recognise other nationalities that make up Nigeria. Elections are over, it is time for governance. We expect that the principle of federal character, which is constitutional, should be respected,” Gary Enwo-Igariwey, the President-General of Ohanaeze Ndigbo, a pressure group which advocates the interest of the Igbos who dominates the South East, told the Punch.

Buhari sees himself as a Northern president. His appointments till date show he has no regard for Nigerian federalism. — Femi Aribisala (@femiaribisala) July 4, 2015

@MrFixNigeria I really I want him to succeed also,but from the look of things it seems his govt is govt of d North,by d North n 4d North.

I want Buhari to succeed but his close advisers who can advise him should remind him that Nigeria is bigger than ‘Northern Nigeria.’

The paper also cited complaints from the southwest-dominated Yoruba ethnic pressure groups. “What is more worrisome is that the immediate past INEC Chairman, Prof. Attahiru Jega, handed over to a Southerner but the Presidency changed it to a Northerner” A leader of one of the pan-Yoruba groups, Senator Anthony Adefuye, told Punch in reference to Buhari’s appointment of  Hajia Amina Bala Zakari as the Acting of the Independent Electoral Commission. The pressure is also mounting on President Buhari to deliver his promise of security in the face of increased attacks from Boko Haram. Nigeria’s online media space has been abuzz with the number of people killed since the new president’s innauguration, with some blogs putting the figure as high as 500. “Since the inauguration of President Muhammudu Buhari on May 29, over 500 people including soldiers have been killed by Boko Haram forces either through bombings, beheading or shootings”, Akinshilo Ayomide wrote in new generation news website, NAIJ.com, yesterday. Fredrick Nwabufo’s figures in a similar platform, the Cable, was lower, he wrote on the 25th of June,  “Between May 29, 2015, when President Muhammadu Buhari was sworn in, and June 24, at least 221 lives have been lost in Boko Haram attacks, concentrated on Borno and Yobe states. This time around, the attacks have not been territorial — a battle the Nigerian military seemed to have won convincingly — but asymmetrical.” Just this morning, abomb attack on a government building in Zaria has claimed at least 25 lives. While none of these reports are verified, they follow the rising trend of discontent towards President Buhari’s effort in shutting down the Islamist sect, a key promise of his campaign.

Boko Haram is starting afresh with Buhari the same way they started with GEJ. Big mistake on their part, but Government has to take charge. — Bar Baric (@Bar_Baric) July 7, 2015

Its not until Boko Haram wipes out your family in a church service that you will feel the heat. BUHARI STAND UP AND FACE THE DAY!!! — Ese Peters (@EsePeters) July 5, 2015

Almost 500 people have been killed by BH in the last one month. 6 more were killed today. We urge Pr Buhari to put a stop to these killings. — Femi Fani-Kayode (@realFFK) July 5, 2015

“The President is just being thorough and painstaking,” Lai Mohammed, the ruling party’s spokesman said in response to the growing concerns Nigerians have over the pace of the new government. True as that is, since it is still very early days in Buhari’s presidency and he still has almost all of his four years to turn around the present difficulties, the rising pressures tell of the difficulties of leading Nigeria, particularly through the change that the President has promised. Like former president Goodluck Jonathan, whose government was heavily criticised for virtually every move, Buhari is already getting a lot of stick. And that is unlikely to change, at least not anytime soon.