Houston woman who married herself claps back at her critics 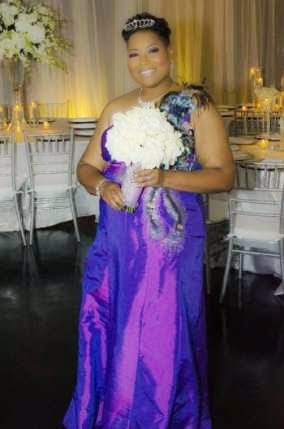 On January 3rd, Houston woman Yasmin Eleby married herself after finding herself still single at 40. Read the story here. She got a lot of bashing from the online community for marrying herself. Many didn’t agree with her methods and slammed her for it, many others mocked her. Well, Yasmin has clapped back at her critics, and says she doesn’t regret her decision…

“The ceremony is not about me being bitter for not having a man. It wasn’t like, “OK, I’m upset that I’m 40 and don’t have a man.” I wanted to show myself my self-love, my self-worth and my self-respect. It was always about me loving me. When God sends me my husband, he will come, but until then, I’m OK with it just being with me.” Continue

Yasmin Eleby: For a few years leading up to my 40th birthday, I’d been joking that if I didn’t have a wedding by 40 that I would just have one myself without a groom. I thought having a wedding ceremony would be a unique way to celebrate my 40th with my family and my friends. And the closer that it got, I realized I had to put up or shut up.

The Root: I’ve been reading the reactions to all the stories on you, and a common comment is, “Where were her friends? They didn’t stop her!” When you told your friends—like, “Hey, guys, I’m going to have a wedding and marry myself!”—what did they say?
Yasmin Eleby: Some of them didn’t believe me. They thought I was joking, but once I explained to them what it would be about, they were supportive.

The Root: When the invites for the ceremony went out to guests, what was their response?
Yasmin Eleby: Not very many people knew it was a wedding. It was kind of a surprise. The invitations just said come celebrate my birthday in a unique way. I invited two of my exes. They were both happy for me. They were excited about it once they got there and realized what was happening.
The Root: A lot of people have assumed that marrying yourself was an act of desperation. What exactly was the ceremony about for you?
Yasmin Eleby: The ceremony is not about me being bitter for not having a man. It wasn’t like, “OK, I’m upset that I’m 40 and don’t have a man.” I wanted to show myself my self-love, my self-worth and my self-respect. It was always about me loving me. When God sends me my husband, he will come, but until then, I’m OK with it just being with me.
The Root: What vows did you take during the ceremony?
Yasmin Eleby: The first one was about forgiving myself. We’ve all made mistakes. I had to realize that if I ask for forgiveness, then it’s done. I don’t have to keep dwelling on the past. I can let it go. My second vow was to honor myself as a beautiful, fabulous being, conscious of making decisions for myself and to honor my self-worth. The third vow was love. I made a promise to love myself and to know that the more love I have for myself, the more love I have to share with others.
The Root: This all sounds so sweet, but it’s been received in a much different light. What do you think of the reactions to your ceremony?
Yasmin Eleby: It has been blown way out of proportion. From the few comments that I’ve read, they’re trying to paint me as crazy or bitter about not having a husband, and that is so not the case. I’m not bitter, I‘m not crazy. I’m just a fun-loving unique individual, and I just wanted to do something special and different.
Source: Linda Ikeji
(0 votes) 0/5
Share on facebook
Facebook
Share on twitter
Twitter
Share on linkedin
LinkedIn
Share on whatsapp
WhatsApp
Share on email
Email