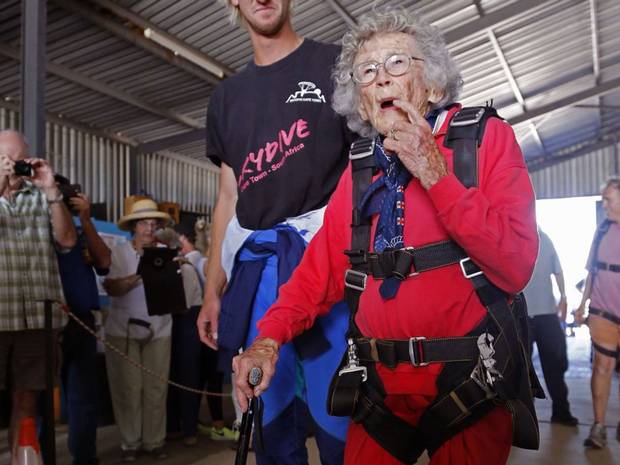 A South African centenarian has celebrated her 100th birthday with a tandem skydive.

Great grandmother Georgina Harwood donned a red jump suit as she ascended into the sky joined by 15 family members before jumping out while attached to Jason Baker, who guided here down to safety in Melkbosstrand, north of Capetown.

Her birthday was on Tuesday and she celebrated on Saturday with what was her third jump after taking up the sport in 2007 at the tender age of 92.

Upon landing, she said: “I was much more conscious of everything this time because I had a better idea what I was going to do,” reports the BBC.

And as if that weren’t exciting enough, on Monday, she’s diving with sharks as she continues to live life to the full, even at 100 years old.

She’ll be lowered into the sea, surrounded by a safety cage, as tour operators throw chunks of meat and fish into the sea to attract sharks.