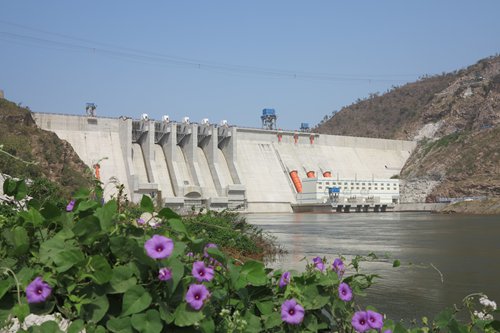 The Bui Dam, a flagship project of China-Ghana cooperation, sits on the Black Volta River in northern Ghana. Photo: Courtesy of Sinohydro Corp

In 1995, when Tang Hong was assigned by his employer to develop clients in Africa, he visited Accra, capital of this nation of 28 million people on West Africa’s Gulf of Guinea. Three years later, Tang launched his own business.

Standing in the wine room of a hotel in which he has invested in Accra, Tang, today’s president of the Ghana Chinese Chamber of Commerce, told the Global Times he had no regrets venturing here.

Tang is not alone in liking Accra.

Zhuang Ruiming, a South African of Chinese descent, told the Global Times that he visited more than a dozen African countries in 2008 trying to find the right business opportunity.

He settled on Ghana, and so far has invested more than 200 million yuan ($30 million) in sand mining and oil refining.

As China pays more attention to Africa, so more adventurous entrepreneurs like Tang and Zhuang have been surfacing in Accra in recent years.

And as Beijing hosted the third summit of the Forum on China-Africa Cooperation, more such cooperation in Ghana can surely be expected in the future.

China was Ghana’s leading investor in 2017, with more than 700 investment projects. In addition, total trade between Ghana and China reached a record $7billion at the end of 2017, according to official data.

Government cooperation has also increased. One of the landmark projects is the Bui Dam: a flagship project that sits on the Black Volta River in northern Ghana.

The 400-megawatt hydroelectric dam was built by the government of Ghana and Chinese State-owned construction company Sinohydro.

After construction was completed in 2013, aside from increasing Ghana’s power generation capacity by 22 percent, the dam has also become something of a tourist attraction, Huang Guanghui, chief representative of Sinohydro, told the Global Times.

Ghana won independence in 1957, and after decades of development is now a politically and economically stable country.

Since President Nana Akufo-Addo took office in 2017 and launched a series of reforms, including the One District, One Factory initiative, the economy has been flourishing.

Officials told the Global Times that, even though economic growth is remarkable, Ghana’s potential has not yet been fully tapped and opportunities abound in areas like infrastructure and manufacturing.

Whether a private entrepreneur like Tang or an official representative like Huang, all agree that Ghana is a lovely place to do business.

“Ghana is one of the African countries that has the best environment for investment,” Tang said. “There are several key indexes to measure investment: stable political environment, rich resources and nice people, which Ghana has.”

The Ghanaian government takes education seriously. Ghana has the largest number of African students in China: More than 6,500 Ghanaians are studying in China. “People in Ghana are nice and well educated,” Tang said.

“Ghana is a country with good security, stable politics, a sound legal system, peaceful people and a tradition of education,” he said.

As a coastal country, Ghana hosts a port for the Economic Community of West African States (ECOWAS).

“When you talk about the ECOWAS region, composed of 15 countries, the population is about 300 million,” said Yaw Adu Gyamfi, president of the Association of Ghana Industries.

“With the stability of setting up a company in Ghana, the port provides opportunities to all these countries.”

If a company has a base in Ghana, “it’s easy to export its products to Nigeria and Gambia,” Gyamfi told the Global Times.

When Ghana’s transport infrastructure has been improved, “then you can put companies anywhere in (Ghana’s) 254 districts to create opportunities and jobs,” Gyamfi said.

Ghana is also the world’s second largest cocoa producer and exporter after Cote d’Ivoire. But because of an immature infrastructure, Accra has not yet tapped its full potential.

An example is the flight from Accra to Kumasi, Ghana’s second-largest city.

Every day it is almost fully booked. Most business-people would rather take the 270-kilometer flight than drive to Kumasi.

“It takes 30 minutes by air to go to Kumasi compared to driving, which takes from five to six hours,” Tang said. “If there were an advanced highway, a lot of resources could easily be transported and it would be much easier to do business.”

“China, in terms of technology, corporate and financial assistance, has become a major player in the infrastructure sector,” Ghartey said.

“There’s hardly an African country that is developing a railway network without China’s help. And we don’t want to do it any differently.”

After 23 years’ development and as the two countries enhance cooperation, Tang’s business has expanded from trade to hotel management and manufacturing with more than 1,000 local employees.

Tang was elected president of the Ghana Chinese Chamber of Commerce (GCCC).

“As the president of GCCC I always encourage Chinese people and any Chinese who opens business here and invites me, no matter their business size, I will definitely go,” he said.