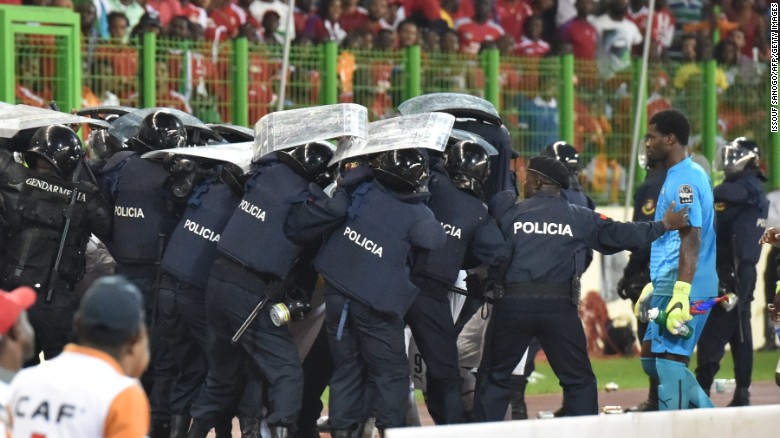 Ghana booked its place in the Africa Cup of Nations final — but only after Thursday’s semifinal was brought to a halt when Black Stars supporters were forced out of their seats after appearing to be targeted with missiles by Equatorial Guinea fans.

With full-time fast approaching and Ghana leading 3-0 — thanks to goals from Jordan Ayew, Wakasu Mubarak and Andre Ayew — play was suspended following the sight of Black Stars fans making their way onto the side of the pitch, seeking refuge from what was being thrown at them.

Players were forced to stand in the middle of the pitch as they awaited a decision, while a police helicopter hovered above the Estadio de Malabo pitch in Equatorial Guinea.

Chaos ensued as it was unclear as to whether play would eventually resume or the match would be abandoned, with reports suggesting that police were dispersing supporters and leading Ghana fans away to their safety.

Eventually, it was decided that the final few minutes of the match would be finished, with action being played out before the full-time whistle signaled Ghana’s progress to the final where it will meet Ivory Coast on Sunday.

Trouble had threatened to boil over prior to that, with Equatorial Guinea supporters venting their frustration and firing missiles at the Ghana players and staff at half-time as they headed down the tunnel.

It was a depressing way for the host nation’s fairytale Africa Cup of Nations story to end.

A team eliminated from the qualifying stages last July reached a first semifinal in its history after only being instated as host of the tournament in November following Morocco’s decision to back out due to Ebola fears.

The rapturous home support inside the Estadio de Malabo was at first a joy to behold as the Equatorial Guinea fans roared their team on against Ghana, yet as certain decisions went against the National Lightning both players and supporters alike grew frustrated, with tensions eventually reaching boiling point.

Despite the events that had unfolded, Ghana celebrated its victory at the full-time whistle, for a first final in 33 years had been reached.

Having failed to get past the last four of the competition at the last two attempts, a mouth-watering showpiece event now looms against Ivory Coast — a repeat of the 1992 final in which the Elephants came out on top.

The Black Stars’ first-half pressure was rewarded shortly before the break as Felipe Ovono brought down Kwesi Appiah for a penalty, receiving a yellow card for his troubles.

Jordan Ayew, who had struggled to make a real impact up to that point, stepped up and sent Ovono the wrong way with a coolly-taken spot-kick to break the deadlock for his side and break Equatorial Guinea hearts.

Determined to find an equaliser ahead of the break, the home side piled players forward for a corner, only to be left exposed at the back as Ghana soon countered through Christian Atsu, who found Mubarak, with the Celtic man then drilling home to double the lead.

Hopes of a second-half comeback for Equatorial Guinea fans slowly faded as a Ghana side now full of confidence began to take real control of the game.

A number of chances went begging for the Black Stars to add gloss to the scoreline as Andre Ayew headed a John Boye knockdown wide, before Appiah failed to find a way past Ovono after being played in on goal.

Andre Ayew, though, soon made sure of things — if there was any doubt — 15 minutes from time as he tapped home Appiah’s delivery from close range.

Trouble, of course, was still to come, but Ghana’s passage to the final was eventually confirmed after a series of events that will leave a much-unneeded shadow over a tournament that deserved better.