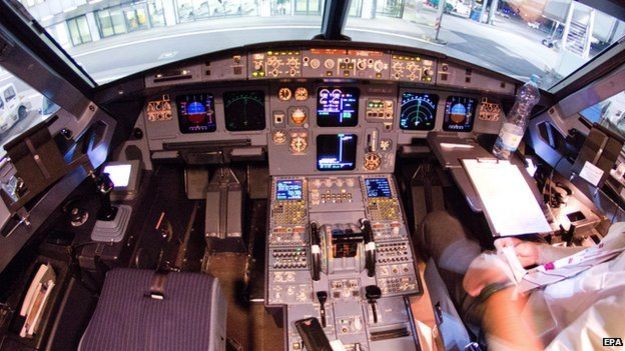 The co-pilot of the Germanwings flight that crashed in the French Alps, named as Andreas Lubitz, appeared to want to “destroy the plane”, officials said.

Marseille prosecutor Brice Robin, citing information from the “black box” voice recorder, said the co-pilot was alone in the cockpit.

He intentionally started a descent while the pilot was locked out.

Mr Robin said there was “absolute silence in the cockpit” as the pilot fought to re-enter it.

He said air traffic controllers made repeated attempts to contact the aircraft, but to no avail. Passengers could be heard screaming just before the crash, he added.

Details are emerging of the German co-pilot’s past – although his apparent motives for causing the crash remain a mystery.

Mr Lubitz, 28, had undergone intensive training and “was 100% fit to fly without any caveats”, according to Carsten Spohr, the head of Lufthansa, the German carrier that owns Germanwings.

Mr Lubitz, 28, had undergone intensive training and “was 100% fit to fly without any caveats”, according to Carsten Spohr, the head of Lufthansa, the German carrier that owns Germanwings.

The focus now moves from the mechanics to the man flying the plane. An accident expert has told me the investigators will pore over the co-pilot’s background and that of his family too.

Did he owe money? Was there a grudge? They’ll look at his religion, whether he was in trouble with the law, whether he had a stable love life. This kind of event is rare but it has happened before, although the reasons vary widely.

After 9/11, they made cockpits impregnable. It keeps the terrorists out, but in the end it also allows someone to keep their colleagues out too. Airlines have to make a call. Which is the bigger threat – terrorism or suicide?

Passengers were not aware of the impending crash “until the very last moment” when screams could be heard, Mr Robin said, adding that they died instantly.

Meanwhile, relatives and friends of the victims are due to visit the area of the crash.

Many expressed anger and alarm after the likely cause of the crash emerged.

“One person can’t have the right to end the lives of hundreds of people and families,” Esteban Rodriguez, a Spanish factory worker who lost two friends aboard the aircraft, told the Associated Press news agency.

The principal of a German high school that lost 16 students and two teachers in the crash said the latest news was “much, much worse than we had thought”.

Residents of Alpine villages near the scene of the crash have also expressed shock.

“For the pilot it’s suicide, perhaps, but it’s an attack on the other people. Yes, an attack,” Charles Bosshardt, a mountain risk adviser, said. “It’s horrible, there are no words.”

Lufthansa has arranged two special flights for families and friends on Thursday – one from Barcelona and one from Duesseldorf – to Marseille, and both groups will travel on by road. Separately, some relatives who did not want to fly are travelling by bus from Barcelona.

The second “black box” – that records flight data – has still not been found.

Other incidents thought to be caused by deliberate pilot action