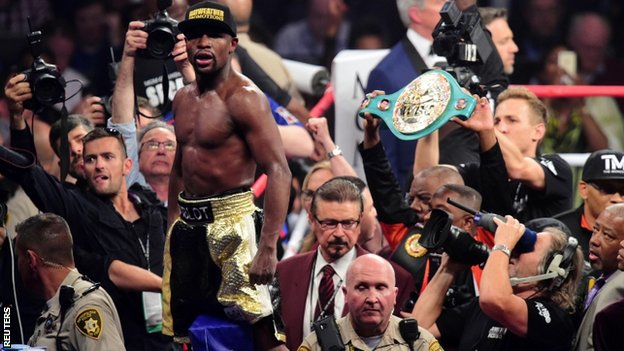 Floyd Mayweather emerged victorious from the most lucrative fight in history, beating Manny Pacquiao via a wide unanimous decision in Las Vegas.

American Mayweather, 38, delivered a defensive masterclass against his Philippine rival at the MGM Grand Garden Arena, making the necessary adjustments after only a few rounds before disappearing out of sight.

With his victory, Mayweather also cemented his status as the greatest pound-for-pound boxer of his generation.

The five-weight world champion is now undefeated in 48 professional fights, stretching back 19 years.

Multi Grammy Award winner Jamie Foxx sang the American national anthem prior to the fighters entering the ring. So prized was a seat that many celebrities were even sitting behind the press row.

Pacquiao, 36, began his ring walk at 20:45 Vegas time – to the strains of a song he recorded especially for the occasion – and was awarded a rapturous reception. Mayweather, on the other hand, was roundly booed, despite being effectively the house fighter.

The opening round was extremely cagey, with both men trying to establish their distance, but Mayweather did land with a couple of eye-catching right hands on the counter.

Not only did Mayweather look noticeably bigger than Pacquiao, he also looked quicker in the early rounds.

And when Pacquiao did get close, Mayweather was content to tie him up, to both Pacquiao and the fans’ frustration.

Mayweather rocked Pacquiao with two more rights in the second, although Pacquiao was able to get inside his rival’s superior reach and unleash a couple of flurries.

The third round was a more even affair, with Pacquiao able to draw Mayweather into some exchanges and Mayweather doing plenty of rough stuff on the inside.

Pacquiao really came into the fight in the fourth, staggering Mayweather with a left hand, which many thought would be a key weapon in this fight.

Mayweather was forced to cover up on the ropes and many of Pacquiao’s follow-up punches were caught on the arms and gloves, but a smile from the American signalled he may have been hurt. 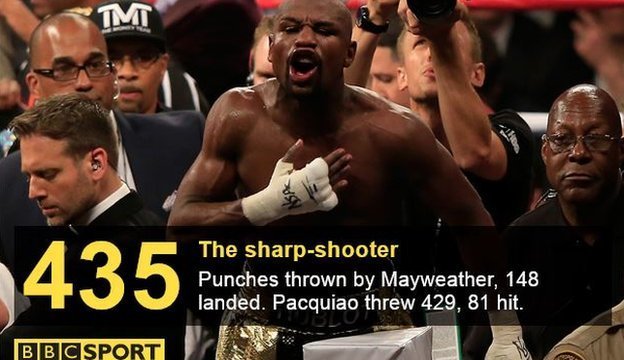 Mayweather’s head had cleared by the start of the fifth and he proceeded to win the round courtesy of his trusty right cross, with Pacquiao not applying enough pressure or displaying the aggression many felt he needed.

Pacquiao rocked Mayweather again in the sixth, before Mayweather got on his bike in the seventh, slipping and sliding out of reach and frustrating Pacquiao as he looked to engage.

In the eighth it was Mayweather’s left that did most of the damage and although he did ship another sneaky left, by now it was apparent that Pacquiao, naturally the smaller man, did not have the necessary power.

It was more of the same in the ninth, during which there were definite signs that Pacquiao was tiring and the fight was beginning to get away from him.

By the 10th, Mayweather had made all the adjustments he needed to make and continually made Pacquiao miss, like a matador with an ailing bull, while doing enough on the counter to win the round.

In the 11th, Pacquiao had gone from bull to mouse, getting snapped on the nose time and time again by Mayweather’s jab as he tried to get inside.

Pacquiao’s expected late rally did not transpire and the air of resignation in the arena at the final bell told you everything you needed to know – that Mayweather had won an intriguing rather than thrilling fight with plenty to spare.

And while many observers who paid to watch would have been disappointed with the action, the fact that Mayweather won so handily was more proof of his unparalleled genius.

Pacquiao’s pride will no doubt be salved when he next checks his bank account – it is estimated the fight will generate $400m (£265m) in total, with Mayweather and Pacquiao set to split in the region of $230m (£150m).

Afterwards Mayweather confirmed he would fight one more time in September before retiring, although the opportunity to surpass Rocky Marciano’s mark of 49 fights undefeated might prove too tempting to pass up.

Amir Khan is on the list of possible opponents, as is fellow Briton and IBF welterweight champion Kell Brook.

A confident Mayweather showboated towards the end of the fight

Mayweather taunted Pacquiao about money before the fight, with the American reportedly earning a bigger share of the purse