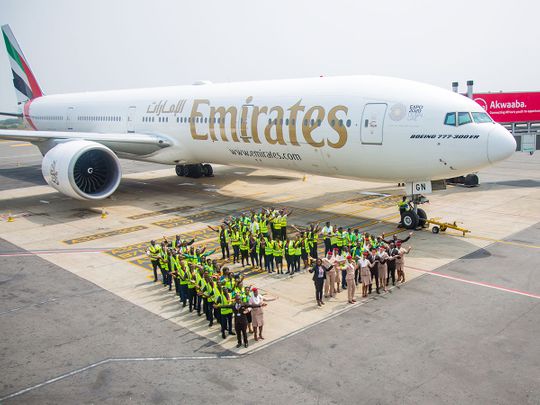 The opening of the new Emirates Lounge in Cairo. Emirates plans to increase its flights to Egypt.
Image Credit: Emirates

Dubai: Emirates Airline has said it sees potential for growth in Africa, with plans to increase its frequencies to some destinations there including Morocco, Ghana, Senegal, Egypt, and South Africa.

Orhan Abbas, senior vice-president of commercial operations in Africa for Emirates, said Africa has been one of the strong performing markets for the carrier over the past two years, even amid challenges there.

In the year ending March 31, 2019, Emirates saw a 9 per cent rise year-on-year in revenues from its operations to and from Africa, with the region registering the strongest growth compared to other markets.

The second largest growing markets in terms of revenues were the Americas, at 8 per cent, followed by Europe at 6 per cent.

Abbas said the growth in travel into and out of Africa stems from various sectors including leisure, business travel, trade, and religious travel especially for Haj and umrah from West Africa.

The potential going forward in Africa looks very good. I see it as an untouched market until today, in terms of its aviation sector, trade, tourism — there’s a lot to discover in Africa.

“The potential going forward in Africa looks very good. I see it as an untouched market until today, in terms of its aviation sector, trade, tourism — there’s a lot to discover in Africa,” he told Gulf News in an interview.

And that’s not just for passenger operations.

Abbas said cargo performance to and from Africa has also improved, particularly in terms of demand for perishable goods from the continent.

He described Africa as having a lot of “underserved” markets, partly because of regulatory restrictions in certain countries — though Abbas did not specify which countries he was referring to.

Within the continent, Emirates said it has seen significant growth specifically in Egypt, Morocco, South Africa, and Nigeria.

“Egypt is an example where the economy is booming and the more you grow, the more potential you see. It’s our strongest market in Africa,” Abbas said.

Egypt’s economy has been growing over the past two years as the country adopted fiscal and monetary measures recommended by the International Monetary Fund as part of a deal to receive a $12-billion-loan from the Fund. The reforms included a devaluation of the currency to help attract foreign investors and international tourists.

Currency fluctuations in Egypt and other African countries have also hurt Emirates, though, representing one of the biggest challenges for the airline.

“Our greatest threat in the last couple of years has been the devaluation of currencies and repatriation of funds. This has been massive for us,” Abbas said.

“We’ve lost a lot of money on those two areas. But still, the performance has been going on. We have seen challenges but it [Africa] does bounce back.”

He said Emirates was facing challenges with repatriation of funds from Zimbabwe and Ethiopia, and earlier, in Nigeria, Angola, and Sudan.

The airline is in talks with governments of both Zimbabwe and Ethiopia, Abbas confirmed, about getting the money it is owed.

“We have funds stuck but we believe in those economies,” he said, adding that Emirates did incur losses because of currency devaluations in different markets over the years.

Emirates currently flies to over 20 countries in Africa, and while it plans to add frequencies to some cities there, Abbas said the airline is not planning to immediately enter any new destinations.