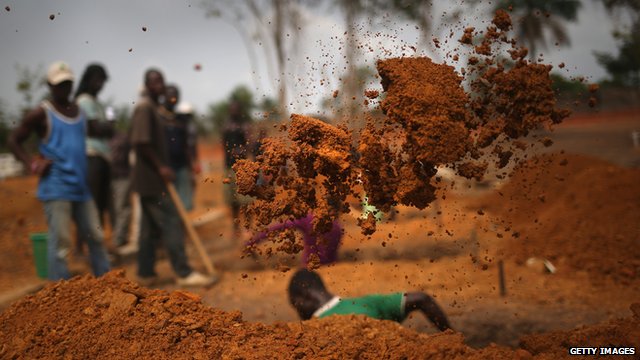 Liberia is to reopen its borders following a reduction in the number of Ebola cases being reported in the country.

President Ellen Johnson Sirleaf made the announcement on Friday and said nationwide curfews would also be lifted.

New infections have dropped to one-tenth of the level seen when the virus was at its peak.

But health officials warned the decline has levelled off in the last month.

Dr Bruce Aylward, who leads the World Health Organization’s official Ebola response, said data showed the steep decrease in infections had now flattened, at a rate of around 120 to 150 new cases a week.

“It’s what keeps me up at night right now,” Mr Aylward said. “This is not what you want to see with Ebola.”

More than 9,300 people have died since the outbreak of the virus early last year.

However, Liberia, Guinea and Sierra Leone have pledged to achieve zero Ebola infections within the next two months.

Liberia was hardest-hit by the outbreak, but has been leading the recovery, with only two confirmed cases in the week leading to 12 February. This compares to 74 in Sierra Leone and 52 in Guinea.

In a statement on her website, President Johnson Sirleaf said “health protocols” would prevent the virus being carried across the country’s borders when they reopen on Sunday.

Borders were closed last year and an overnight curfew imposed as part of a state of emergency.

Schools in Liberia have also reopened in recent weeks in a bid to help the country return to normal.

Staff have been given thermometers to take pupils’ temperatures and buckets of chlorinated water for them to wash their hands.