Desirable Areas To Live In Lagos 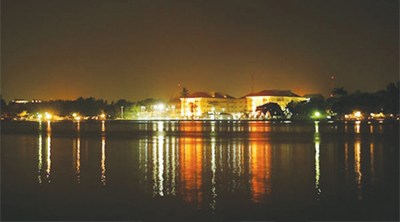 The dream of the average person living in Lagos is to one day own a house in Lagos but there is Lagos and there is “Lagos”, for example there are parts of Lagos i would not even consider owning property at, the wahala is not even worth it abeg so as a realtor and real estate enthusiast, I carried out a serious research (indeed) and i came up with a list of the 10 most desirable locations to own a house, provided money wasn’t a constraint, taking into considerations that there are gated communities (estates) everywhere in Lagos where it would seem like you are balling in Monaco even but I’ll try not to include these estates like NICON Town, Carlton gate, you get my point.
…..so here is my list based on parameters like traffic patterns, general security situation, nearness to CBD’s, Airport and the likes

10. Yaba/Akoka and environs: Yaba area of Lagos is a mix of commercial & residential properties and it is easily accessible from most part of the state, some really nice estates are also springing up around there plus it hosts quite a number of institutions, there are lot of bars, clubs and hotels for those that like a bit of living pleasure, and e-centre is always a good place to hangout at.

9. Surulere and Environs: Yezzir, good old surulere…..well it may not be revered as it was decades ago but surulere is still a nice place to work and live, not forgetting the numerous malls springing up, the redeveloped Adeniran Ogunsanya mall comes to mind

8. Apapa GRA and environs: i know when you hear of apapa, what readily comes to mind are container laden trailers and terrible traffic caused by the trucks entering and exiting the ports nearby but apapa still commands one of the highest prices on properties, both commercial and residential, a lot of “old money” resides there and foreigners too, in fact Apapa in the past used to be known for its expatriates status, surely it isn’t what it used to be but Apapa “head still dey there”

7. Ajah/Lekki 2 and environs: Ajah has really come a long in terms of development and its proximity to the business hotbed of VI and Lagos Island has had a positive effect on its development plus the addition of posh estates around the place is also a good thing but there are dots of shanties also, not to mention the never ending traffic…..”gosh, if only I could afford Lekki Phase 1”, you might find yourself thinking as you drive home on a stressful Monday evening.

6. Oniru Estate/ Lekki 1: Very few places in the continent of Africa has attracted as much real estate development as these axis (of the rich) but a major downside for me is that this place like many nice places in Lagos is overpriced, the prices of properties are artificial, I just hope the bubble does not burst soon, that would be bad market for me.

5. Victoria island : VI has become the preferred location for big business to site their corporate headquarters displacing Lagos Island from this position, everybody want to have an office here, which some residents depending on who you talk to may find it pleasing or really as a nuisance, while some landlord are happy, smiling to the bank by leasing out their house to companies, others may not be fond of their next door neighbor who might just be a bank, anyhow VI is still a good place to live and own a property at.

4.Magodo GRA/ Omole Estates: if you are looking for a serene place to live where there is very little traffic except when a neighbor is having a party and very much residential with less commercial activity, the Magodo GRA Phase 2 (shangisha) is your best bet, located just on the other side of Alausa secretariat..With the nearby Omole Estate 1& 2, MKO Abiola Gardens, these places have come to define a visitor’s first impression of Lagos as they enter through the Lagos Ibadan Expressway

3.Ikeja GRA and Environs : Ikeja GRA is beautiful, it is by far the most popular GRA in the city and its location plus nearness to the Ikeja CBD and other nice areas like Maryland, Opebi Allen, ilupeju and the busiest Airport in the country MMIA, not forgetting the seat of power , Alausa makes ikeja GRA a prime location to build that dream home.

2. Ikoyi : From being the colonial quarters of yore to the present day, ikoyi has always worn the tag of where the nouve riche live, after so many of its original swampy lands have been sandfilled and developed into prime lands more than doubling its size, ikoyi continues to attract the elites that want exclusivity. Estates like Northern Foreshore and Parkview are some of the gated estates in ikoyi…..if you are looking to get a slice of ikoyi, you have to pay the price (literarily).

1.Banana Island: First of all (go down low, couldn’t resist…ha ha ha ), I am not a fan of banana island for the simple fact that it is the most grossly overpriced piece of real estate in the world, I could get a 6bedroom mansion in Beverly Hills for example for what it would cost me to get a 1200sq/metres of land in banana island. FACT. But it is what it is after all, this artificial sand filled island Ssection of ikoyi (surprised !) is the ultimate when it comes to where the average Mike (pun very much intended) would want to build his palatial palace, no matter how tacky and ridiculous it may appear to the general population, underground cable and drainage are some of the perks banana island has to offer.

PS: if you disagree with this list, write or give an opinion and we  would love to compare and contrast.