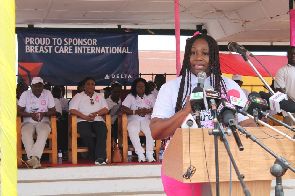 As Breast Cancer Awareness Month continues around the world, Delta Air Lines has extended its support for Ghana’s Breast Care International (BCI) for another 12 months funding vital screenings for women and men across the country.

Over the past year, through Delta’s partnership, BCI has screened more than 11,600 people for signs of breast cancer in rural regions including Akoefe, Bepoase and Aburi, in addition to Accra, Kumasi, Sunyani, and Koforidua. Of these, nearly 1,300 suspected cases were detected.

Furthermore, on Saturday morning, Delta and BCI jointly hosted the Walk for the Cure in Koforidua. The annual event raises awareness of breast cancer and this year 40,000 people are expected to take part.

“Breast cancer is a global epidemic and we are proud and humbled to be able to support BCI’s work to save lives here in Ghana,” said Corneel Koster, Delta’s senior vice president Europe, Middle East, Africa and India. “Enabling women and men free access to the screening program is part of our commitment to giving back to the communities where we work. We expect hundreds more Ghanaians will benefit from this over the next year.”

The events in Ghana come in the middle of Breast Cancer Awareness Month, which Delta has supported system-wide since 2005. During this time, the airline and its customers have raised $12.8 million and funded more than 40 research projects to help end breast cancer.

The airline’s team at Kotoka International Airport has also decorated the Delta area pink for October and is fundraising throughout the month. Delta also has pink uniforms for staff including a new dress this year by Zac Posen. On-board, pink products are also for sale, including pink lemonade and pink headsets, while Delta One customers will each receive a special pink amenity kit.

“The annual BCI Ghana Walk for the Cure has assumed a national character, attracting people from every strata of society, affirming that our awareness creation program has been embraced by all,” said Dr. Mrs Beatrice Wiafe Addai, President of Breast Care International.

“We are riding on this national acceptance to increase our visibility, and by extension, heighten and sustain awareness about this debilitating disease, which but for our consistency, would have needlessly destroyed several otherwise precious lives and families.”

Delta has operated flights to Ghana since 2006 and operates nonstop service up to five times a week to New York-JFK. In Africa, it also serves Lagos, Nigeria; Dakar, Senegal; and Johannesburg, South Africa.

Through the hubs in Atlanta and New York-JFK, the airline offers an unsurpassed network of hundreds of convenient onward connections throughout North America, Latin America and the Caribbean.