Debt is a cleverly managed reconquest of Africa’ – Thomas Sankara 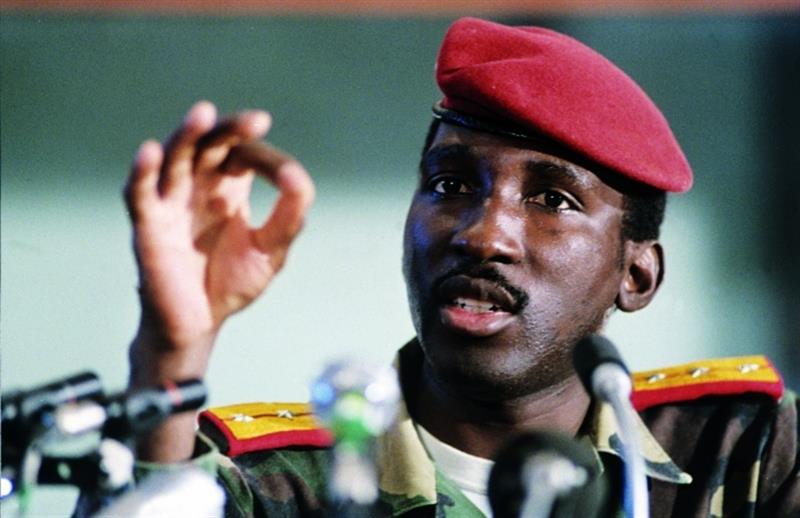 A week before he died, Sankara said, “revolutionaries as individuals can be murdered, but you cannot kill ideas”. And so, for us today, the final challenge rests not in finding more Sankaras, but in becoming them – in bringing these ideas to life.

Thomas Sankara, former leader of Burkina Faso, was the apparent opposite of everything we are often told that success should look like. Mansions? Cars? Who? What? Get out of here. As Prime Minister and later as President, Sankara rode a bicycle to work before he upgraded, at his Cabinet’s insistence, to a Renault 5 – one of the cheapest cars available in Burkina Faso at the time. He lived in a small brick house and wore only cotton that was produced, weaved and sewn in Burkina Faso.

Going by his lifestyle, Sankara was the antithesis of success, but it is this very distinction that enabled him to become the most successful president Africa has ever seen, in terms of what he accomplished for and with his people. Sankara would not have chopped P-Square’s money given twice a chance – in fact, he might have sat him down and taught him a thing or two about the creeping menace of pop culture patriarchy – because Thomas Sankara, “The Upright Man”, was a feminist. In this and many other ways, Sankara was the African dream come true, the only living proof that hopes of African independence are not dead on arrival.

Going by his lifestyle, Sankara was the antithesis of success

His life ended with a bullet which, according to the testimony of some involved in his assassination, was ordered by former Liberian president Charles Taylor with the support of the French and American governments, and delivered via Blaise Compaoré – Sankara’s long-time friend and colleague, and the current president of Burkina Faso. Four years prior, when Compaoré and Sankara had jointly staged the popular coup of 1983 that made Sankara president, Burkina Faso was one of the poorest countries in the world. Under Compaoré it still is – so much so that the dire circumstances led to a series of violent protests last year.

During the years of Sankara’s administration, things were turning around, especially in the areas of health, education and the environment. Mass vaccination campaigns were rolled out with a level of rapidity and success that was unprecedented for an African country at that time. Infant mortality rates dropped. School attendance rates doubled. Millions of trees were planted in a far-sighted effort to counter deforestation. Feminism was a core element of political ideology, manifested through improved access to education for girls, and inclusion of women in leadership roles. Sankara introduced a day of solidarity in which men switched traditional gender roles – going to the market, running the household – so as to better empathise with what women handle on a daily basis. It was Africa’s greatest success story.

How was this achieved? In a speech to the UN General Assembly, Sankara reflected on the state of Burkina Faso at the time that he had come to power, stating that “The diagnosis was clearly sombre. The root of the disease was political. The treatment could only be political.” And Sankara did not hold back with the treatment. As soon as he came into power, he set about razing the conventional structures of power and inequality.

Gone were the days of politicians living lavish lives sponsored by taxpayers’ money – Sankara issued salary cuts across the board, including for himself. The fleet of Mercedes Benzes for high-ranking officials was done away with, and the cars replaced by Renault 5s. Land and oil wealth were nationalised. While the masses celebrated, the country’s elite was enraged as decades of class inequality, which had previously favoured them, suddenly came into jeopardy.

The international community, whose interests were vested in the status quo, were also disturbed by Sankara’s radicalism, not least when he started calling for African countries to reject debt repayments. From the 1970s onwards, newly-independent African governments had begun to rapidly accumulate huge amounts of debt from rich countries and the Bretton Woods institutions: the World Bank and the International Monetary Fund (IMF). As the Cold War intensified, such loans were increasingly used as a tool for securing political support from key countries – even governments that were patently corrupt and would inevitably default on repayment, such as Mobutu’s in the DRC, were readily provided with billions of dollars in credit.

In one of his most famous speeches [above], delivered at the summit of the Organisation of African Unity (now the African Union) in Addis Ababa in 1987, Sankara issued a passionate call for a United Front Against Debt. “We think that debt has to be seen from the standpoint of its origins. Debt’s origins come from colonialism’s origins. Those who lend us money are those who had colonized us before,” he declared. “Under its current form, that is imperialism-controlled, debt is a cleverly managed re-conquest of Africa, aiming at subjugating its growth and development through foreign rules. Thus, each one of us becomes the financial slave, which is to say a true slave…”

At the time of his speech it was clear, just a couple of decades into independence, that African countries were quickly becoming financial slaves. Interest rates rose sharply in the 1980s, but governments continued to borrow more and more. Between 1982 and 1990, African debt doubled from US$140 billion to US$270 billion. Sankara rightly predicted that this would cripple African development for generations to come. Despite debt relief programs, which have resulted in increased spending on health and education in African countries, Jubilee Debt Campaign estimates that in 2008, low income countries paid over US $20 million a day to rich countries.

Their decision-making power is also constrained within the limits of orders given by the institutions and countries to which they are indebted. Strangely enough, while these orders demand decreased public spending for example on health, they don’t seem to have made a dent on the perpetual rise of Africa’s waBenzi clan: politicians rolling in flashy Mercedes Benzes bought with taxpayers’ money. And to make matters worse, with access to new creditors – especially China – many African governments are once again sinking into the vicious cycle of debt dependency that Sankara foresaw.

His Foreign Policy Advisor, Fidèle Kientega, explains how this foresight was shared with ordinary people. “Sankara did not dictate to people or force them to work. He told them about the mechanisms of getting loans…He said that they could relax at home and ask him to borrow money from the neo-colonialists, but that they would have to bear in mind that they and their children would have to pay back the loans with interests. Consequently, his government would find it difficult to provide universal education and health care because he would have to spend a greater chunk of the meagre tax revenues in servicing the debt. They could also beg for aid but then they would remain beggars forever. The people got the message and were motivated into working harder.”

Stories of Sankara tend to focus on his radical policies, but it is this approach that was probably the most radical of all – his efforts to bring discussions and decisions, “the apparatus of democracy” as Kientega puts it, to ordinary people. He was able to do this not only because he had political commitment to the proverbial grassroots – as many leaders claim to do – but because, through the choices he made, he positioned himself as their equal. Sankara made personal sacrifices that no other president has ever made, and did not view them as sacrifices, but as an act of solidarity, of African pride. In his view it was only through collective commitment to such sacrifices, which he hoped would one day be viewed as “normal and simple” actions, that Africans could begin to work their way towards self-reliance.

Despite Sankara’s incredible oratorical gift, the message came across even more eloquently through his actions: it is better to live a simple life in freedom, than a fabulous lifestyle in economic chains. Unfortunately, despite his best efforts, most African governments did not share his philosophy. In a recent series of debates on democracy organised by TIA, people from Ghana, Kenya and South Africa all expressed a lack of faith in their countries’ democratic systems. Why? Because, they said, existing political systems across the world don’t answer to ordinary people – they answer to money. African governments are first accountable to rich countries, then to their own local elites; and finally, if convenient, to the people.

In a world that only answers to money, everything is for sale – democracy, freedom, dignity, integrity. Thomas Sankara bucked this trend, and in so doing struck at the very core of the international system of control – because for once, the world was faced with an African leader it could neither buy nor co-opt.

And because he was not for sale, Sankara had to be eliminated, buried in an unmarked grave whose whereabouts are still unknown. To this day, Sankara’s family and supporters in Burkina Faso and around the world are still fighting for justice, some in the face of death threats. Meanwhile, despite the fact that some of the fastest growing economies in the world are now African, and the fact that poverty rates are falling, so much of our energy now and for the foreseeable future will have to be devoted to further reducing poverty levels relating to decades of political selling out. And the selling out continues, even as our economies are bouncing back. Why do our leaders keep selling us out? Same reason we all sell out – for nice things. “Where does this debt come from anyway?” Sankara asked. “Did we need to build mansions…or foster the mentality of overpaid men among our officers?” This last question, in particular, has become more relevant as we learn of just how much money Africa’s elite have been salting away in foreign accounts even as their countries’ foreign debts mount: ‘Capgemini and Merrill Lynch estimate in their latest World Wealth Report that Africa has about 100,000 “high net worth individuals” with a total of $1.2 trillion in liquid assets. The debts, on the other hand, are owed by the African people as a whole through their governments.’

Of all the holy cows in the world today, materialism is probably the deepest and most universally entrenched – from home to school to pop culture. This entrenchment is necessary to preserve the current system of inequality, because it opens us all up to compromise, to co-option. How much would you sell your values for? How much do you sell your values for? Sankara demonstrated that the make-or-break of freedom is not so much about heroes and politics as it is about the very personal struggle between principles and cash-money.

A week before he died, Sankara said, “revolutionaries as individuals can be murdered, but you cannot kill ideas”. And so, for us today, the final challenge rests not in finding more Sankaras, but in becoming them – in bringing these ideas to life. “You have to dare to look reality in the face and take a whack at some of the long-standing privileges,” Sankara said, “so long-standing in fact that they seem to have become normal, unquestionable.” And that’s the most daunting thing of all, because it requires a struggle with the person in the mirror.

Source: This Is Africa