When Leroy Mwasaru‘s school in western Kenya faced a sewage problem, the teenager and a group of friends set out to fix it.

It all started after tractors clearing land for the construction of a new dorm at the Maseno school near Kisumu encountered pit latrines. During the building process faeces started leaking into a nearby stream.

“There was uproar from the local community,” Mwasaru recalls. “It was the only source of fresh water, and nobody wants faeces in their water.”

At the time, the school was using firewood in the kitchen. Forests around the school were being eroded by the school’s growing demand for timber, and smoke was damaging the lungs and eyes of the cooks.

Mwasaru came up with a plan to solve the problem by using human waste to power the gas stoves — all whilst keeping up with homework and exams.

“There were some people who thought it would not work — the attitude was very negative,” says Mwasaru, who is now 17. “We came up with workshops in the school and in the community to convince people, and the response became more positive.”

In total, it took about a year for the “Human Waste Bioreactor” to go from idea to working facility. 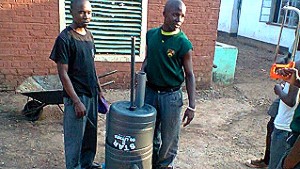 During the test phase, the students used two tanks – one turned upside down and placed in the other. When the bacteria reacted with the oxygen and waste, gas was created. The top part raised up proving the presence of biogases.

Storage pits had to be dug, and the team had to collect cow dung and food waste which they used instead of human waste during the prototype phase.

The team’s idea impressed Innovate Kenya, who awarded the teens funds to purchase a digester, which helps with the process. Gas produced in the pit was then filtered through a pipe into the kitchen, and used on the stoves to cook food.

Once the teenagers proved their prototype worked with cow dung, they started using human waste as well. Colleagues, friends and teachers at the school were benefiting from the system, but that wasn’t enough for Mwasaru.

“After the school prototype was working I showed my dad, and he was very impressed,” Mwasaru says. “I helped him build a similar system and now he uses it for cooking.”

Having six cows, and fewer humans in his house, meant Mwasaru senior used cow dung to generate more gas than he can use. So he now shares it with the village which is made up of around 30 houses.

Research conducted by WFP found that collecting firewood is very time consuming. Woman in Kenya reported needing to collect wood three times per week, and each trip took an average of eight hours.

“With the gas they don’t spend time searching and carrying wood,” says Mwasaru “They are really happy about that.”

While this initiative may well be helping resolve a local issue, not everybody is convinced that biogas is the way forward. Environmental researcher Rinkesh Kukreja argues that the methane gases extracted in biofuel converters is still harmful to the environment as it contributes to the heating of the ozone layer. He also points out another, more obvious, drawback:

“There is the smell to consider. While it is not physically harmful, it is definitely unpleasant, and it can attract unwanted pests (rats, flies) and spread bacteria and infection.”

Read this: This bus runs on human poop

Still, Mwasaru’s system means fewer trees have to be chopped down. When his reactor is working with human waste, it could replace as much as 196 tonnes of wood – a significant benefit for the local ecosystem.

Progress has been made in extracting biogas, but Mwasaru has gone back to using cow dung rather than human waste whilst working on the next step.

“When urine is mixed with solid waste, acid in the urine breaks down the biogases,” Mwasaru explains. “We need to develop the most cost-effective way and energy efficient way to use the human waste.”

To achieve this, the team has designed a toilet which separates solid and liquid waste. While it’s just on paper at the moment, the team is working with iHub Kenya to develop a prototype which they hope to build in March.

“Leroy seeks to understand everything he doesn’t know by asking probing questions, taking notes and experimenting to learn,” says David Moinina Sengeh, an MIT researcher and president of Global Minimum, a group working with youth to help them turn their ideas into tangible solutions.

“What motivates him is to solve problems that currently affect others in his community,” adds Sengeh. “His curiosity to explore and learn from doing within a motivation to bring broader social change is something that we hope to see in all our youth and frankly everyone.”

Mwasaru may be one of the youngest people to produce biogas, but he is not the first.

Waste generated from 8,000 inmates at the Nsinda prison is put through a system similar to Mwasaru’s to make the kitchens smoke and firewood free.

But Kenya and Rwanda aren’t the only African countries finding uses for human waste.

In Nigeria, three teenagers came up with a power generator that produces enough electricity for six hours. The whole thing is powered with pee.