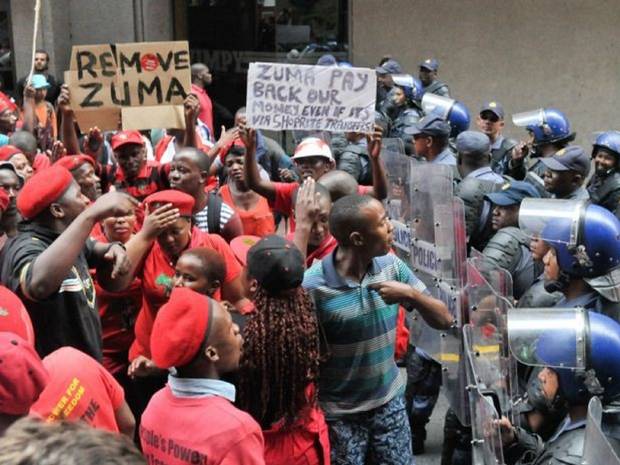 Protesters were thrown out of parliament in South Africayesterday after they demanded that the president answer questions about a spending scandal.

An opposition party – the far-left Economic Freedom Fighters – challenged Jacob Zuma in an unprecedented sign of discontent at his administration about allegations of corruption.

EFF members – who were led by Julius Malema – began demanding that the president answer when he would repay part of a $23 million (£14 million) state-funded security upgrade of his rural home.

Zuma had “benefited unduly” from upgrades – which included a cattle enclosure and amphitheatre – and should pay back some of the costs of the unnecessary renovations, Public Protector Thuli Madonsela said in a report last year.

The president denies any wrongdoing.

The Speaker, Baleka Mbete, warned several EFF members to sit down before ordering their removal, which prompted a brief brawl in which several people were injured, witnesses said.

Zuma was questioned by EFF soon after he started speakingOutside the parliament building in Cape Town, protesters clashed with riot police who used water cannon and force to move the party away from the premises.

The President’s first State of the Nation speech since his re-election last May had been billed as an opportunity to highlight the achievements of the ruling African National Congress (ANC) and its plans for the year ahead.

Zuma then delivered his speech to claps and cheers of support from ANC lawmakers as he highlighted the strides South Africa has made since the end of white-minority rule two decades ago.

However, Malema – who announced before the session that he would be allowed to “insist in a polite manner” to question Zuma – said: “We have seen that we are part of a police state.”

“It robs the people of South Africa of what President Nelson Mandela fought for, which is the upholding of the rule of the law and the constitution.”

Last time Zuma was in parliament in August, EFF members had chanted “Pay back the money”.

“We can never allow parliament to be a place where people exercise anarchy and basically try to effect a coup in parliament. It is good that it was protected,” he told ENCA Television.