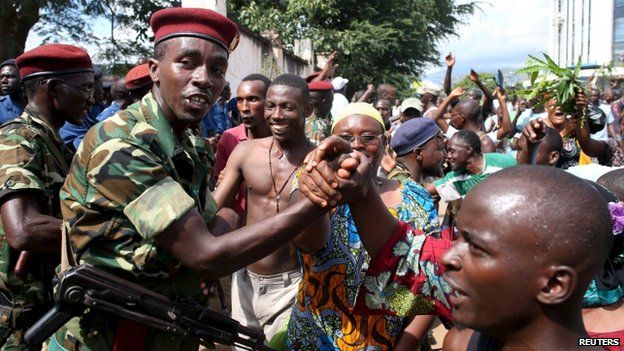 A coup attempt has been launched in Burundi to try to overthrow President Pierre Nkurunziza, amid unrest over his bid to be re-elected to a third term.

Thousands of people in the capital, Bujumbura, celebrated the announcement by Major General Godefroid Niyombare.

But the coup outcome is far from clear.

The presidency said it had been foiled. Mr Nkurunziza left a summit he was attending in Tanzania to try to return home but some unconfirmed reports say his plane has now returned to Tanzania.

Gen Niyombare said in a radio address he had ordered “the closure of the airport and border, and I ask every citizen and law enforcement down to the airport to protect it”.

Mr Nkurunziza had been in Dar es Salaam to discuss the crisis with regional leaders. Tanzanian President Jakaya Kikwete said the summit condemned the coup.

A statement from the Burundi presidency said: “It is with regret that we have learned that a group from the armed forces mutinied this morning and declared an imaginary coup.

“This coup attempt has been foiled and that these people, who read the coup announcement on the radio, are being hunted by defence and security forces so that they can be brought to justice.”

A presidential spokesman said Mr Nkurunziza would address the nation on his return and was not afraid.

The BBC’s Maud Jullien in Bujumbura says thousands of protesters marched to the city centre alongside soldiers and two tanks after the coup was announced.

Police shot at the soldiers and the crowd. At least two protesters were killed.

At the scene: BBC Africa’s Ruth Nesoba in Bujumbura

What I can see right now is a lot of police checks on the road. They are stopping every vehicle, ensuring that those travelling are not carrying any weapons. We can see truckloads of army personnel driving past where I am standing, perhaps trying to get them to military bases.

When the general made the announcement there was a mixed reaction and some gunfire around the capital. In some parts there was panic and fear; people were running to safety, locking themselves into any building they could find. But there were also those who were celebrating, saying that this is what they wanted.

The protesters continued to march, one telling the BBC this was a victory after weeks of protests.

But the offices of the state broadcaster and the presidential palace still appear to be in the control of soldiers loyal to the president.

BBC reporters in the capital say that protesters broke into the national jail and released detained demonstrators, before burning down the building.

Our reporters say the mood in the capital appeared to have calmed in the evening.

All international flights into and out of Bujumbura are currently cancelled.

The peace accord that brought an end to Burundi’s brutal 12-year ethnic civil war ensured that the future army would be split 50-50 between minority Tutsis and majority Hutus. This means that unlike the police, whose officers have been forceful in putting down the anti-third term protests, the army is regarded as a neutral force.

Nevertheless within the military there are internal divisions – with former Hutu rebels regarded as loyal to the ruling party and those in the old Tutsi-dominated army seen as loyal to the opposition.

The surprise about this coup declaration is that it comes from Gen Niyombare, once a close ally of the president. However, it is unclear whether the general, fired as intelligence chief in February, can command the loyalty of all soldiers.

Announcing the coup in a statement read to reporters in a military base, Gen Niyombare said he did not recognise the leadership because the president’s bid for a third term violated the constitution.

In a radio broadcast on a private station, Gen Niyombare said: “The masses have decided to take into their own hands the destiny of the nation to remedy this unconstitutional environment into which Burundi has been plunged.

“The masses vigorously and tenaciously reject President Nkurunziza’s third-term mandate… President Pierre Nkurunziza has been relieved of his duties. The government is overthrown.”

He said the mission of the salvation committee was the “restoration of national unity… and the resumption of the electoral process in a peaceful and fair environment”.

The unrest began on 26 April and has led to the deaths of more than 20 people.

Tens of thousands of Burundians have fled to neighbouring states in recent weeks.

President Nkurunziza has rejected calls to postpone next month’s election. However, the summit in Tanzania urged him to do so.

The 51-year-old former rebel leader argues that he is entitled to run for a third term because he was first appointed to the role by parliament in 2005.

The constitution states a president should govern only for two terms, but earlier this month a court upheld Mr Nkurunziza’s interpretation.