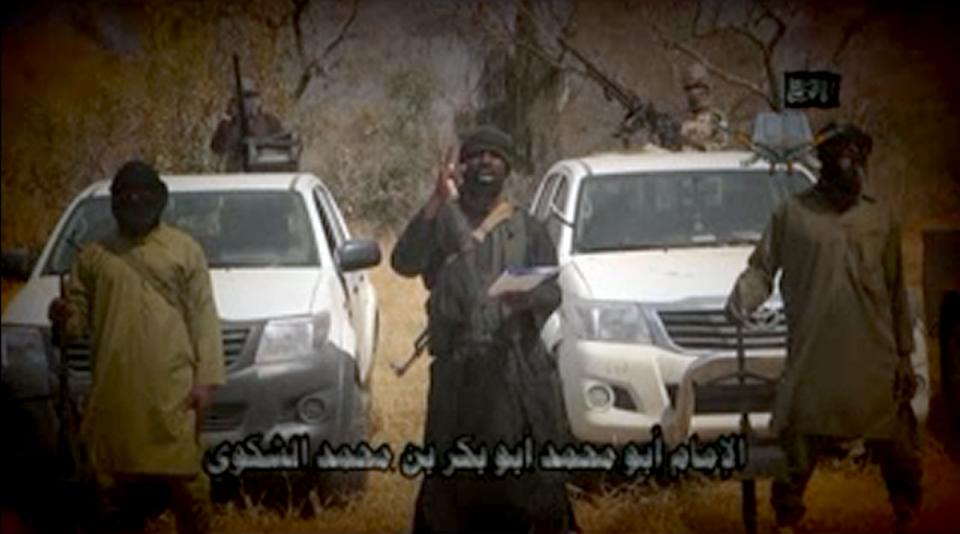 “The Boko Haram gunmen are now at the Jeka-da-Fari roundabout in the centre of the city, firing indiscriminately and throwing pamphlets calling on people not to participate in the elections,” resident Ali Dahiru said.

Other witnesses said the extremists stormed the city around 9:00 am (0800 GMT) and advanced without any resistance from the security forces.

A Nigerian fighter jet encircled the city but made no attempt to attack the insurgents, said witness Kabiru Na-Gwandu.

He said the residents had been warned to evacuate Gombe, which has been attacked by the insurgents previously.

“I received calls from friends in Kwadam, which is five kilometres away, warning me to leave because Boko Haram were on their way,” said Na-Gwandu, who lives near the military base in the city.

“I evacuated my house along with my family before they arrived in the city and I’m happy that I did because from information I’m receiving they have taken over the military barracks,” he said.

The Boko Haram fighters appealed to residents to boycott the elections which had originally been planned to take place on Saturday before they were postponed until March 28.

Gombe has been repeatedly hit by suicide attacks and other bombings blamed on the Islamists in the six-year insurgency in Nigeria’s northeast.

Two weeks ago, two suicide bombers blew themselves up outside a stadium, just minutes after President Goodluck Jonathan had left the venue where he had given a campaign speech. Many people were injured.

In February 2012, Boko Haram launched its first offensive on the city, killing 14 people in a bomb attack on a police station. Soldiers repelled another attack on a nearby prison.

Locals said prior to Saturday’s invasion, the militants had camped at Hani village, 36 kilometres from Gombe, where they preached to locals and informed them they were on their way to take over the governor’s office in the city.

“They came around 6:00 am (0500GMT) and took over the military checkpoint that was curiously abandoned by soldiers on Thursday,” resident Mustapha Baba told AFP.

He said the insurgents had fled from the Galda forest in neighbouring Yobe state following ongoing offensive on their camps by Nigerian troops.

The Nigerian military last week launched a ground and aerial offensive on Boko Haram camps in the Galda forest, from where the Islamists are believed to be planning attacks in the area.

In the past few weeks, the group has stepped up its offensive both within Nigeria and against border towns of neighbouring countries, forcing Nigerian general elections that were scheduled for Saturday to be postponed by six weeks.

On Friday, Boko Haram fighters attacked Chad for the first time, targeting a village on the shores of Lake Chad.

The attack marked a new escalation in the group’s bloody six-year campaign to establish a hardline Islamic caliphate in northeast Nigeria, which borders Cameroon, Chad and Niger, a campaign that has killed some 13,000 people since 2009.

Nigeria, Cameroon, Chad and Niger this month launched an unprecedented joint effort to crush the Islamists, raising hopes that the insurgents — who have outgunned Nigeria’s national army — might finally have met their match.