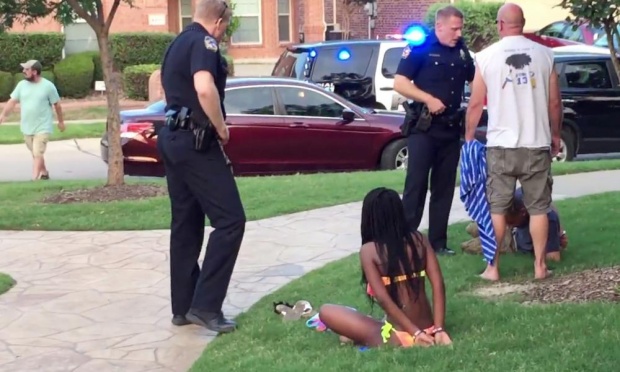 Over the weekend, a video surfaced that showed police in McKinney, Texas violently controlling kids on a suburban street and pulling a gun on a young black girl. After I heard about it, it took a few hours before I could screw up the courage to watch it, because I knew it would make me cry. And it did.

The video made me cry because it showed me how black children are not allowed to play. How they’re not allowed to just be fucking kids. How their play becomes criminalized and how they’re socialized to become black adults who internalize that their very breathing selves are criminal.

The video (and the follow up interview with its shooter, Brandon Brooks) made me cry because they showed how a public space like a pool becomes the domain of a security guard with no accountability. Who calls the police. Who quickly assume guilt on every black child in sight.

It made me cry to see a gun pulled on these children. I only had a police officerbegin to pull a gun on me once, but it scared the shit out of me and altered my interactions with police forever – and I was an adult. How scarred will these children be after such trauma?

It made me cry because, even though I knew before watching that no one was going to get shot, I couldn’t shake the terror that one of those kids was going to wind among the Guardian’s count of police killings. If my terror was palpable despite only viewing what happened on video, how much terror must those poor kids have endured?

It made me cry to see a young black woman, vulnerable and almost naked in her bathing suit, being manhandled by a cop. Who tossed her around like her body was his property. Who listened to her sobbing for her mother, yet pushed her face down into the grass, kept his knee in her back and handcuffed her.

It made me cry to think about how the black lives matter discourse (including my own) is often focused on men who are killed by police, at the expense of recognizing the many black women who face similar mortal injuries – or any number of violent, sexual and psychological assaults.

It made me cry to see how black life is simply illegal in the United States: driving,walking and now swimming while black (or even just being in a neighborhood where other black people are swimming) makes one suspect.

It made me cry because almost anything involving black people and swimming or water can make me cry, just as the scene of slaves being thrown overboard in the film Amistad made me burst out in tears in 1997. As did last month’s story about the sunken slave ship headed for the Smithsonian. One of the saddest (and proudest) stories my father shared with me was about how he learned to swim as a grown man. As a child in Ohio, he couldn’t learn to swim in the local segregated pool; and, even though he served in the United States Air Force on Johnston Island for a year, he couldn’t swim. I see these black kids terrorized around a pool, and I think of the child version of my father being told he couldn’t go to the pool, as well as the young adult Sergeant Thrasher on that dinky island in the South Pacific afraid because he couldn’t swim. I think of the terror of the black woman slave tied to a chair that the future US Senator James DeWolf tossed overboard when he was a slave runner, before he expressed regret – about losing the chair.

It made me cry because I thought about how, in 2010, about 70% of black children couldn’t swim, while only 42% of white children couldn’t. According to US Masters Swimming: “Overall, nine people per day drown in the United States; six out of the nine are people of color.” This is racism equalling death right here and McKinney will perpetuate this.

It made me cry to see, yet again, how being black makes one guilty until proven innocent in the United States. Respectability politics fail when a polite young black man says: “Sir, we just came here,” is told what he’s doing is illegal, is treated as a suspect and is told he’s “a part of the mob.” At the same time, Brooks, the videographer, said he was “basically invisible” to the police and so could shoot what was happening without his body controlled as every black body in sight had to be.

None of this is new to anyone paying attention. Nor is the officer who pulled the gun, Eric Casebolt, a “bad apple”: he was named 2008 Patrolman of the Year. All of this is business as usual.

But each black life harmed by racism is not simply a number: it is its own precious, beautiful life. To watch these beautiful young lives grotesquely injured was heartbreaking. White supremacy in America won’t let our black young children be kids, swim or receive congratulations while graduating without having the breath, light and life smothered right out of them.