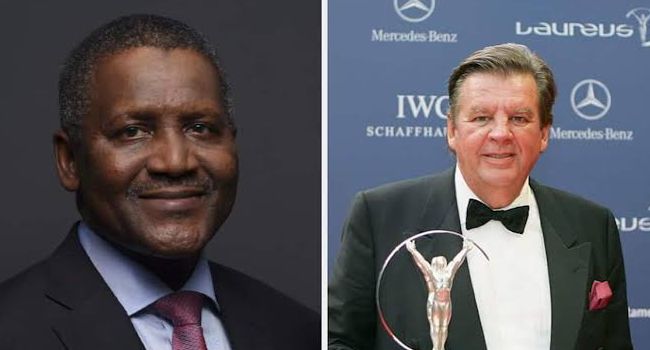 In February, South African businessman, Johann Rupert, seemed like the billionaire that would dispose Aliko Dangote from his 12 years reign as the richest man in Africa, but that wouldn’t be happening anytime soon.

That possibility has gradually been fading, with Rupert losing about N94 billion ($227 million) on Wednesday, dragging his networth down by -2.73%, while Dangote’s wealth remained flat.

The South African is the owner of Compagnie Financiere Richemont, known for the brands, Cartier and Montblanc, while the Nigerian billionaire is the founder of Dangote Group, a cement and sugar producer, which is now entering the oil business.

Rupert is now worth $8.1 billion, reflecting his networth is down -22.8% February-to-date, losing N996.43 billion ($2.4 billion) within the last three months, as Ripples Nigeria had previously reported his fortune was $10.5 billion.

Recall that his wealth had been reported in February to have grown by 105.8% in the last 10 years, rising from the fourth spot on Africa’s richest list, with $5.1 billion in 2012, to the second wealthiest person in the continent.

While his networth growth since 2012 has been significantly higher than that of Dangote, who recorded 25.8% within the same period, according to analysis of Forbes Billionaire Index, Rupert is shedding his gains over the past years.

Rupert was once $3.6 billion shy from overtaking Dangote, whose wealth has been weighed heavily on by the slow Nigerian economy, but the South African billionaire is now $6.9 billion short of the Nigerian businessman’s fortune.

In the last three months, Dangote’s networth has added only about $900 million, as Africa’s richest man is now estimated to worth be $15 billion, tightening his grip on the top spot.

As a media platform, we hold leadership accountable and will not trade the right to press freedom and free speech for a piece of cake.

If you like what we do, and are ready to uphold solutions journalism, kindly donate to the Ripples Nigeria cause.

Your support would help to ensure that citizens and institutions continue to have free access to credible and reliable information for societal development.