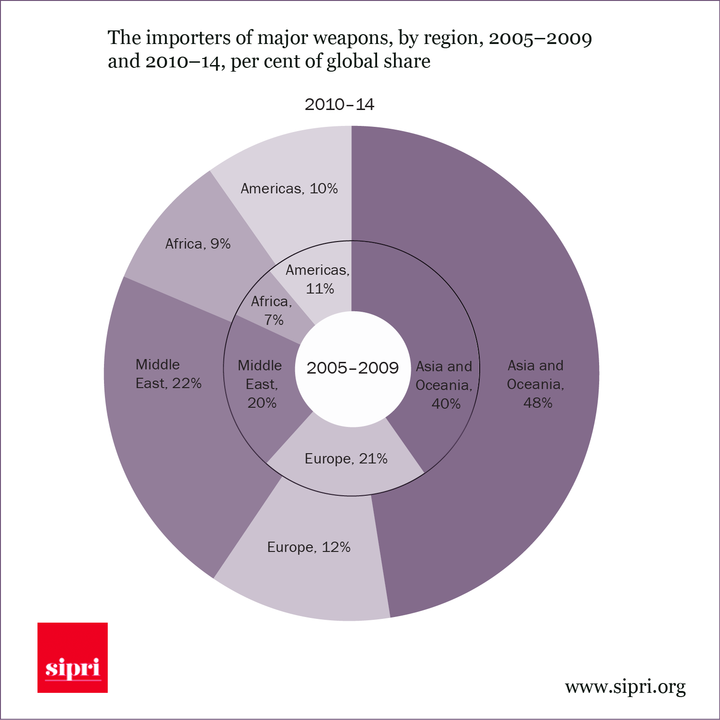 “This study was done by gathering information from different open sources. The data set in the report however does not include small arms. It includes large equipment such as missiles, aircrafts, submarines,” Pieter D. Wezeman, a Senior Researcher at SIPRI and co-author of the report told Ventures Africa. Wezeman indicated that while it is clear small arms do constitute a large portion of the weaponry imported to the African continent, a lack of reliable sources that can provide accurate data make it impossible to verify exact quantities.

Algeria and Morocco lead the pack

Algeria and Morocco were by far the largest importers of arms to the African continent over the past five years. According to Wezeman, arms purchases in Algeria are driven by a high growth economy fuelled by a rise in oil and gas prices that ended in the fourth quarter of 2014. Algeria’s spending is driven in part by the need to modernize its army and the persistent threat of terrorism. “They’ve really bought anything which you can imagine, which you could need for armed forces. Anything from rifles and large armoured vehicles to submarines and what you could call a small aircraft carrier,” Wezeman said. Algeria has also ordered 42 combat helicopters from Russia and 926 armoured personel carriers (APCs) to support an ongoing conflict with rebel groups and Al Qaeda. Morroco’s purchases, which include frigates and other heavy weaponry, are driven in part by a rivalry with Algeria along with security operations related to its continued occupation of Western Sahara. Morocco receives funding assistance for military purchases from the United States and the United Arab Emirates.  Sudan, which comprises only 6 percent of Africa’s total arms imports, continues to buy weapons for its military activities in Darfur and because of tension with the newly created state of South Sudan.

Further south, Nigeria and Cameroon have each spent heavily to deal with the menace of Boko Haram. Wezeman suggested that Nigeria does not seem to have a long-term strategy behind its defence spending. “For a very long time Nigeria has had what I would call a somewhat haphazard way of buying arms. They buy a bit here and they buy a bit there and it doesn’t really seem to hang together that well. So what you see is a lot of second hand equipment. They buy a few combat helicopters in Russia, they buy a few in Ukraine. They buy a few armoured vehicles in South Africa, but then they are buying similar types in China and UAE, in Turkey,” Wezeman said. “It seems to be very much emergency action to quickly fill up the arsenals to take action, especially against Boko Haram.”

SIPRI’s 2014 report on world military spending will be released next month.

While the report highlights spending in countries close to some of the continents hotspots, SIPRI’s Wezeman also notes that there are some interesting trends in defence spending across the continent. Uganda has continued to invest in higher-end equipment like the $37.5 million Sukhoi SU-30 fighter-bomber. Coastal states like South Africa have increased procurement of small and cost effective naval vessels to improve maritime security.